Aliza Vellani is an Indo-Canadian actress born and raised in Vancouver, Canada. She is a working actor best known for her series regular role as Layla Siddiqui in CBC's Little Mosque on the Prairie (2006-2012), Sandeep in her recurring role in Fox's The X-Files Revival series (2016) and will appear in an recurring role in the upcoming Disney series Mech X-4 (2017). Additionally, Aliza is a graduate from Simon Fraser University with her BFA in Theater Performance. 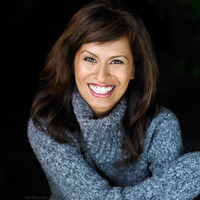