Part II: A Kid Who Just Wanted To Make Movies and My Aha Moment in SCHIZOPOLIS

Posted 9 years ago by Darrin Dickerson 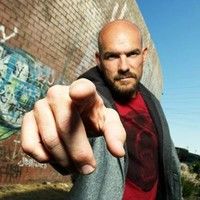 Today, Darrin Dickerson returns for Part II of his "A Kid Who Just Wanted To Make Movies and My Aha Moment in SCHIZOPOLIS" guest series.

Don't forget to check out Part I if you haven't already.

On shoots for some of our bigger clients at the first agency, I'd had opportunity to be around a few "big shot" commercial directors. Evidently insecure men who made their way with more b.s. than talent. I remember one guy in particular who would scream and try his best to humiliate crew members in front of talent and client. He was one who obviously got off on the power his position gave him. This was one of my first and vivid memories of what I did NOT want to be. What I observed from this situation is that none of his crew respected him. They tolerated him and did as they were told because he was the boss, but they had no respect for him. That lack of respect was slightly evident on set, but undeniable when hearing the chatter on the grip truck or in the distant corner at lunch. This guy also had little or no knowledge of the mechanics of a film set. He couldn't have opened a c-stand or set a shot by himself if you held a gun to his head. What was interesting is that the client and execs thought he was a genius and loved him, totally oblivious to the six or seven people carrying him. I knew then and there that the respect of my crew, was more valuable to me.

My experience on the set of SCHIZOPOLIS was the exact opposite of the one described above. Steven was always calm and centered, knowing exactly what he wanted, and he was one of the crew, working alongside everyone else, not some guy sitting in a chair waiting for someone to hand him his coffee. This first experience with this "Hollywood" director would prove to be the blueprint I wanted to follow.

For the time I worked on the film, the entire crew consisted of six people, counting the director and producer. It was Steven, the producer John Hardy (who also worked alongside everyone else), David, Whit Norris, Mike Malone, and myself. Steven was shooting it himself, 35mm on an old blimped Arri. We had a small light kit that traveled in the back of David's Subaru and a small assortment of expendables. These guys moved quick and got it done with what they had. My duties started out as a P.A. the first day, but then I graduated to grip/electric, and even ended up on camera in a couple of shots.

We traveled from location to location in a small caravan of minivans, pickup trucks, and hatchbacks. We followed Steven's calm lead and if for some reason a shot didn't seem to pan out, we shot something else. No problem. The vibe was always very laid back and the lack of tension translated into great spirits from the cast and crew. This in turn translated into wanting to go above and beyond, wanting to stay extra hours, and wanting to work extra hard. I would learn to appreciate this close knit, small crew, family even more when later working on bigger Hollywood union jobs.

We were not bound by guilds or rules or invisible boundaries. Everyone worked where they were needed. The sound guy would grab a sand bag, the p.a. would move a light, the director would even get his own coffee. I remember one time when Steven wanted to grab a driving shot and planned to shoot it out of the back of John's explorer. It was a tight fit and awkward, so I suggested he shoot it out of the back of my pick-up. Yeah, cool. So twenty minutes later, I'm driving down Airline Hwy. in Baton Rouge with a famous Hollywood director in the back of my truck. Surreal. Awesome. It was all about making the movie and doing what we needed to in order to get it done. I was happy to be there, happy to be a part of a movie being made, and happy to be part of THAT crew. Some of my most vivid memories of filmmaking are from SCHIZOPOLIS. Oh, and I wasn't even getting paid ... and I didn't care.

There were several opportunities during down time to just sit and talk. I remember one such conversation with Steven while we waited for everyone to arrive at one of the locations. I told him of my previously foiled plan to get into the Masters program at Florida State, how all I wanted to do was make movies, and I took the time to tell him again how much I appreciated him giving me this opportunity. In that conversation, his advice to me was to "just shoot something". He said to take what I've got access to, whatever camera, whatever equipment and make my own film. One step further, I was encouraged by him and David to use whatever money I may have used on tuition and invest in my own equipment, to be able to continue to make my own films. Thus began my self-education. Over the next five years, I would build my own grip truck, buy my own camera, and write and direct a series of five short films. This became my school, my opportunity to experiment with technique and format, to learn through trial and error, to actually make some movies. And the best part, at the end of it, I had my own movies and I owned my own equipment. Best advice I've ever been given, advice I pass along to this day.

About five years later, I got a call from John Hardy wanting my new address in TN. They were releasing SCHIZOPOLIS and he had a little check for me. A few weeks later, I got a check for $5,000, at a time when it was really needed, by the way. That was just icing on the cake. I never expected to get paid for that two week "film school". I simply looked at it as a great opportunity, a rare participation in indie filmmaking alongside seasoned pros. That small group of guys to this day hold the spot of having made the biggest impact on me in this industry. Steven and his crew showed me it was possible for an ordinary guy from Louisiana to make it big in the Hollywood machine.

Almost 20 years have passed. I was able to stay in contact with Steven for a good portion of that 20 yrs. He was always willing to offer advice and encouragement, and answer my questions. An occasional lunch with John Hardy when in LA was always nice, especially one time on the Warner Bros. lot while they were finishing Ocean's 11. On our way to the commissary, John introduced me to Jerry Weintraub who was producing Ocean's. Surreal. David Jensen is still one of the main people I look up to in this industry and the subject of some of the coolest (and funniest) memories I have of my first days on film sets. I just spoke to David a few days ago. I think a large part of what felt good about that first experience is that it felt like family. We shot in John's house, we shot in David's house, in Steven's parents' house, we were around their wives and kids, and it all was a good time, and they made me feel welcomed.

Family is important to me, whether it be my actual family or my film family. You'll see the same people on my crew today that you saw ten or twelve or even 32 years ago (my mom still is part of the crew on just about everything we do, the guys love to see her name show up for craft service/catering). My experience with the crew of SCHIZOPOLIS gave me the confidence to do what I do and not worry what the standard operating model thought about it. As a small tribute to those guys, I'll sometimes use a producing pseudonym of David B. Stevens. The David for David Jensen, the Stevens for Steven Soderbergh, and the B. for Boyd, a family name. At the end of the day, I'm still just a kid wanting to make movies. I hope any example I give is nothing short of the positive and encouraging examples I received. You never know when you'll be someone's "Aha" moment.

Darrin Dickerson is a working Director/DP/Storyteller doing commercial, music video, and feature work through his production company Ghostwater Films since 1996.

Darrin is available for questions and remarks in the Comments section below.

Blog Post by Darrin Dickerson, posted on Wednesday, May 22nd, 2013