Another Stage 32 Success Story: "Winning This Contest Feels Like a Game Changer!"

Good morning Stage 32 Family! We have got another big, busy, creative week ahead of us as we plow through the remaining weeks of this year. To kick off this Monday right, I asked the winner of our 3rd Annual Sci-Fi & Fantasy Screenwriting Contest, Bill Poore, to recap his recent trip to Los Angeles.

As I hope many of you must know by now, the winner of every Stage 32 screenwriting contest is sent on a round of meetings in Los Angeles with industry executives, managers, agents, and producers. Bill just returned to his home in New York from LA on Friday, and as you can tell from his recap, it was incredibly productive. In fact, just before writing his blog entry for me, he was polishing a draft of another screenplay that was requested by a producer during a meeting in LA! Now that is some serious momentum.

As Bill says, this contest was a game changer.  The access that Bill has as a result of winning the competition will continue and grow.  And as I told him, the team at Stage 32 is committed to helping him along the way. Bill, like all previous winners, has a direct line to yours truly and the rest of the Stage 32 team! We don't leave winners off at the curb. We make sure that the momentum continues and the goals are met.

I am so proud of Bill's efforts leading up to his victory and his commitment to the work during his time in LA and beyond.  Take it away, Bill!

Oh hi there, I just got back from LA.

Yeah, I write movies... I mean, not “movie” movies, at least not yet, more-like blueprints for movies-- you know, ​screenplays​.

A pause. There’s always a pause. “Sir, this is a hospital.”

Okay, a little background: I’m from New York. No, not the city. Long Island. Yuck! That accent, I know. That little dude who terrorizes bagel shops-- yep. That is home sweet home. And I work in healthcare. I’ve got a good, responsible job that I’ve had since pretty much birth. Seriously, I work in the same hospital I was born in!

And I always have, really. Stories for my action figures-- NOT toys, Ma! Comic books. That failed novel that you’re supposed to write in your 20’s? Been there. Twice. And then I have all these movie scripts-- these weird little out-of-the-box fantasy scripts that I never tell a soul about.

Kidding. Wouldn’t that be nuts?! The first thing I ever submit wins the grand prize in the 3rd annual Stage 32 Sci-fi & Fantasy Screenwriting Contest. C’mon! I mean, that’s why I’m here. It probably says that in the title of this blog-post. Those 1st script people are out there, I suppose, but don’t you just hate those 1st script people. Right?!!!

My journey was more ​quarter-life crisis​. I was about to turn 30. Okay, I’m not good at math-- whatever, call it what you will. It was a turning point. A realization that I may never be ​creatively fulfilled if I continue on down this road. I make a living, I’m comfortable, but ​“The mass of men lead lives of quiet desperation.”​ Now that’s either a quote by Henry David Thoreau OR I heard it on a podcast, I like those, but this was my what the f*** moment. Why the f*** not, why can’t I? I know the odds of becoming a professional screenwriter are slim, I don’t care, it was time for me to stop sitting on all these eggs and let them hatch-- is that how it works. Jeez, I am not good at biology either. Point is, I was scared. That’s all it was. ​What if I fail?​ Embarrass myself? What would my family think? The people I work with?

I did it anyway. Submitted everything. Kept writing.

Then, rejection. As expected. But I was writing whether they liked me or not, so I kept going. The following year-- a placement. Small validation. It was enough. Soon, quarters turned to semi’s. Screencraft. Austin. Nicholl. I start getting some action-- actual requests for scripts and let me tell you, it feels waaay better being queried than querying. I make the finals, but never quite capture the prize and all those emails... they stop. Leads go cold eventually. And it got quiet. Real quiet. For a while.

Somewhere in that time, I spend a weekend at a Bed & Breakfast in a super old house with a ton of history. It’s big-time writing fuel and there, I have an idea about a woman who runs a house just like it. She’s older. She feels like she let her chances pass her by. Sounds familiar, but I swear I didn’t plan it. She runs her little inn and all the guests she takes in, to her, are a million times more interesting than her. They’re doing what they love. They’re traveling. They’re seeing the world. Naturally, I fill her house and story with all the best things from my favorite fantasy films. Like the ones they don’t make anymore. WILLOW. LEGEND. EXCALIBUR. I name her RITA.

And this time, I decide to go genre specific for contests. Which is how I find Stage32. The rest is history (last week counts as history, right?).

Here’s what Grand Prize gets you at Stage32. ​Access​. It’s why I picked them. I don’t need cash and I don’t need software (alright, maybe I do need cash, but I do use WriterDuet and that’s free.99 baby!).

Access should always be the only prize you look for. The rest-- bleh, you can keep it (again... I’ll take that sweet $$). Winning the Grand Prize bought me a week in LA, flown out on their dime, for a week of meetings with reps and producers. These are real industry people. Stage32 becomes like your manager in a way. They prep you before. They follow up with them after. They are the bridge and they go over and above!

Here are some highlights:

I have my first “official” meeting not even 2 hours off the freakin’ plane. What a way to start! Even better, it goes the distance. We talk for over an hour about style and movies we love. Hey, does that mean I pass the “I’m not a crazy person” test? I didn’t ask that. Don’t ask that.

Paradigm Talent Agency! Man, just being there felt like I was in the mix. Yo, they got Kombucha on tap! You know what Kombucha is? I don’t... but I respect it.

I have a meeting with a producer with some serious IMDB credits and oh no-- here comes the dreaded “what else do you have” question! Not only do I have something else, they love it!

Driving in LA is nightmarish, so I get to my meeting at a coffee shop early only to discover it’s shut down for filming. We plan to meet someplace else and I get to that second meeting spot only to find IT’S ALSO SHUT DOWN FOR FILMING. Love this town.

In fact, parking sucks so much-- oh, you thought I was done, not even close-- how about finding the last open parking spot in Los Angeles, BUT it’s under a tree with freshly cut branches so that, throughout the night, tree sap slowly coats the entire rental car in a sticky syrup that makes it look straight outta Wonka’s factory, which, by the way-- am I responsible for this? Will I be charged? Are any of you lawyers?

So here I am, still decompressing after that whirlwind LA trip, but that’s kinda where I’m at right now. Sure, I’m waiting to hear back from the good people that Stage32 set me up with, cleaning up those other scripts so I can send them out, but more importantly, I’m still writing. Writing that next thing, which I’ll eventually rewrite, and eventually, ​eventually​ rewrite again. Because that’s really what it’s all about. Writing is the one thing I can control no matter what comes of all this other fun & exciting stuff. And trust me, it was ​exciting​.

Only difference is... it’s not a secret anymore.

Again, many thanks to the Stage32 script services team! Specifically, Jason Mirch who let me bother him all week via text. Solid!

I’ll leave you with this:

PRO-TIP-- when the valet guy hands you the keys to the Bentley and asks if it’s yours, say yes. Don’t say, “... it’s the sticky Chevy Cruze.” 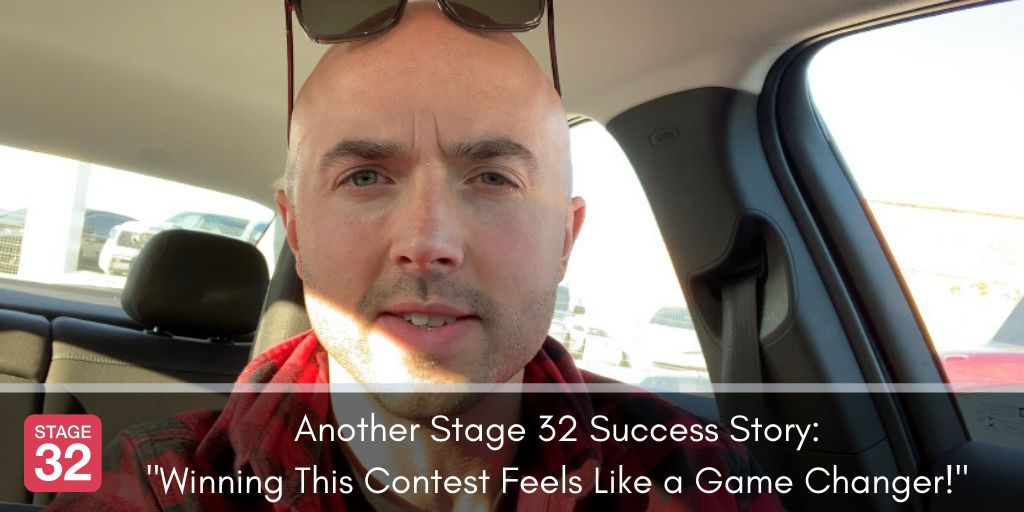