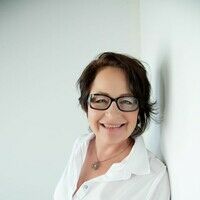 Anne Marie is one of the smartest, wisest, and caring executives I’ve met in this wild and crazy business. She’s seen it all and done it all and goes about her business with class and intelligence. Whenever I’m in her company, I’m blown away by the breadth of her knowledge as well as her willingness (and patience) to educate and assist. She’s truly one of a kind. I’m more than blessed to have her in my life.

Anne Marie began her career at Hemdale where she was Vice President of Acquisitions and Ancillary Sales. During her tenure, Hemdale was one of the leading independent film companies producing such films as: Platoon winner of Best Picture and Best Director, Hoosiers, The Last Emperor winner of nine Academy Awards including Best Picture, Director and Screenplay.

I thank her for her contribution for the Stage 32 blog, and for being the wonderful friend and mentor that she is.

I was at the top of my game - a 'big' fish in a small pond - Minneapolis, MN. I was acting, dancing and choreographing one show after another. I was earning a living - what could be better. Then it started to feel small. I was hitting the glass ceiling. When it came to getting the top financial grants, dancers and choreographers that had moved to Minneapolis from Chicago, LA and NYC were getting them. Not the 'local' talent - me. I had recently choreographed 2 commercials for Target and I now had a 'reel'. Time to move on - Chicago or NYC or LA? In the middle of a -20 degree winter, I choose LA.

With $500 cash in my pocket and my clothes in the back seat, I drove to LA in the middle of winter. I had no job, no contacts, no apartment - nothing set up. My Mom had a cousin and they agreed to let me stay with them for 2 weeks. 6 months later I moved out with a waitress gig and an agent. I quickly realized that waiting for someone to hire me was not where I wanted to be. Back in Minneapolis, I never waited for someone to hire to me, I created the project, the company, the situation to make it happen. Wow, I had an epiphany - that was me being a "Producer." OK, how do I become a Producer in LA? How do you produce TV - how do you produce Film?

I was scared - I was alone - I knew NOTHING!!!   Soon everyone would find out I was a 'Fake". I had to learn the language and the rules of the filmmaking game. For the next 2 years I produced 10 week-long seminars on How to Produce a Film. I would have a different guest lecturer each week come speak about their area of expertise starting with Development to Financing to Marketing + Distribution. Then I would repeat it all over again with new attendees and new guest speakers. I took each class - so I learned; I produced the series - so earned; I had to figure out who to ask to be a guest - and so I networked.

After 2 years or so of this, it was now time to get real. I had my BA in Film. Now for a real world job! Since I was a creative soul at heart, I searched for assistant jobs to a writer, director or producer. For awhile there I was so broke, I went from house sitting job to house sitting job living out of my car. But I could find nothing. Finally I was hired to be the secretary to the President of Distribution for a company called Hemdale. I knew nothing about distribution; I lied about my secretary skills (I did not type nor take shorthand - thank goodness my boss talked really slow); but I was desperate for work. The 3 years I was at Hemdale we won 12 Academy Awards - Platoon, Hoosiers, Last Emperor, Salvador. I became a sponge, jumping at every opportunity to do more and learn more. I offered to go to screenings to evaluate for acquisition for our domestic distribution arm; I offered to sit in on all the negotiation meetings and take notes to learn the legal side. I paid my own way to attend Cannes to see how the international market worked. Hemdale was like a mini-studio financing production and P&A (Print & Advertising for theatrical release) using the studios to distribute their larger films, as well as having an arthouse domestic distribution arm for their smaller films and acquisitions. I got to touch it all. I now had gotten my MFA in Film.

When I left Hemdale, I used that business model to raise the financing to start my first company - Electric Shadow Productions. It was the heyday of Home Video and if you could guarantee a certain level of theatrical distribution, you could get upwards of 50%-75% advance for Home Video rights alone. So my business model was structured such that my investors main investment would be in the P&A (Prints & Advertising) - last money and first money out. I had 2 other women business partners and between all of our contacts we were successful in raising our money, not based on an particular film, but on this business model. However it was all predicated on having our first film in the can within 18 months!! So we had to find something that was ready to go. Our attorney introduced us to Act III, Norman Lear's film development division. Over a weekend I read 2 of their scripts - The Tooth Fairy and Fried Green Tomatoes at the Whistle Stop Cafe (titled shortened later to fit the marquees). I bet my company on Fried Green Tomatoes and the rest, as they say, is history.

During this whole time of raising money and investing in Fried Green Tomatoes I was petrified. This was my first business plan, my first film company, and my first film! The learning curve was gigantic. So much financing, legal, distribution - very little creative. I had to alter my perception of creative and let it include financing and legal. And to my surprise, they can be enormously creative endeavors. Financing is this wondrous puzzle with constantly changing pieces to be massaged and manipulated. And my acting training helped out enormously. I knew how to improvise on my feet; I could hide my fear and seem as calm as a cucumber while I was shaking inside; I could match anyone's energy or emotional level if needed; I knew how to dress and play whatever part was required of me. I DID IT!!! And if a dancer/choreographer from Minnesota with no film experience whatsoever can do it, you can too.

So, what's your story? What's the journey that got you here today?

Anne Marie is available for questions and remarks in the Comments section below.

Anne Marie has also been kind enough to participate in our Next Level Webinar Series. Her webinar, The 5 Secrets to Financing Your Next Indie Film: What Most Filmmakers Do Not Know, will take place at 1PM PST on Thursday, February 13th. Our Early Bird Sale (only $39) runs through this Sunday at midnight PST.

To see a video from Anne Marie, learn more about the webinar, and to register, please click here.