Welcome to the last Monday of this decade! I hope everyone had a safe, happy and healthy holiday week! And obviously, we’re just around the corner from the big one! I am really excited for all that 2020 holds and I am sure you are right there too. But man, what a year it has been! Many members of the Stage 32 community have been blessed with success over the course of the year. In fact, there were so many that I had to break this blog into two parts. If you missed Part One of the blog, you can find it here.

Actually, it is always personal for me. I love hearing about the creative and professional success of our members. It is a thrill for me to get an email, DM, or comment about a milestone reaching, meetings secured, projects optioned, or representation landed. These are no easy feats and I am always so proud of the efforts of our members. Speaking of successes, let’s dive back into the recap of some of our biggest stories of the year!

In July, I had the pleasure of announcing Greg Mania was the winner of our 4th Annual Comedy Writing Contest, with his television project, “Mania”! Stage 32 flew Greg out to LA from New York for a whirlwind tour of industry meetings in Los Angeles. Greg is a very talented writer who has written an independently produced feature film and for publications including Vanity Fair and The Huffington Post, but had yet to break into Hollywood or the television market. Stage 32 set up Greg on meetings with literary managers, producers, and development executives specializing in television who offered invaluable career advice and are excited to read more of Greg's material! Greg is publishing a book next year and every one of the executives and managers Greg met with requested an early copy!

As a result of meetings set by Stage 32, Greg has over 10 industry contacts who will be champions of his work for the rest of his career. I am personally grateful to be a part of Greg's journey as well. He and I developed the Bible for his series, Mania, which he pitched during his time in Los Angeles.

In August, I was pumped to announce that Stage 32 Writers' Room member, and now my dear friend, Chris Torres was signed by manager and producer Brooklyn Weaver of Energy Entertainment as a result of her winning the 4th Annual Stage 32 Television Writing Contest! Brooklyn produced Run All Night with Liam Neeson, Ed Harris, and Vincent D'Onofrio, Executive Produced Out of the Furnace with Christian Bale, Zoe Saldana, Casey Affleck, and Woody Harrelson, and Executive Produced The Number 23 with Jim Carrey! She joins Brooklyn's other clients including Rob Liefeld, the creator of the character, "Deadpool".

Chris was very kind to say, “Thanks to Jason Mirch and everyone on the Stage 32 team for making this possible and I know that they can make your dreams of working in the film business come true. Take advantage of all the education and networking opportunities they offer. Then get out there and make your movie, TV show or web series with the talented people you’ve met on stage 32.” We are so proud of Christine and are grateful we have been a part of her screenwriting journey. At Stage 32, our mission is to shorten every writer's path to success. And to be a part of Christine's success is incredibly gratifying.

In September, we heard from Stephen Potts, a gifted writer and Stage 32 Writers’ Room member, who described how he connected with executive Joe Ferrante through Stage 32 coverage. As Stephen explains, “The notes came back promptly, exactly as advertised...It was immediately apparent that [Joe] came from a writing background himself and that he “got” the project. His notes were incisive and clear, striking the right balance between encouragement and identification of issues to be addressed in a subsequent draft. His very positive comments about my writing gave me as big a boost as I could have hoped for - but now came the bonus, which I had not expected at all. He placed both the project and my writing in the “Consider” category, and asked if it was OK to take the script to colleagues in his company for further views.”

Joe and Stephen continue to discuss projects and develop ideas together, despite Stephen living in Scotland and Joe being in New York. That connectivity is the power of Stage 32. And personally, I sincerely appreciate Stephen as a writer and a member of the Writers’ Room. Despite the time difference that puts the time well past midnight for him, Stephen is online every Wednesday for each live webcast.

September also saw huge success for the winners of the Stage 32 4th Annual Short Film Contest who had their projects screened at the Raindance Film Festival in London! Judged and curated by Academy Award-winning short film filmmakers, the Stage32 screening featured filmmakers from Canada, USA, France and Turkey, who were all in attendance for a Q&A with Stage 32's CEO Richard Botto. RB was joined by the Grand Prize winner, director of Tell Him, Virginia Bach and director of Sojurn, Jon Lewis.

October was an incredibly busy month for Stage 32! It was during October that we announced a partnership with the Austin Film Festival at which screened our 4th Annual Short Film Program and RB and I spoke on numerous panels covering screenwriting, filmmaking, film producing, film finance and more.

It was also during October that I was happy to share the story of Donnalyn Vojta, a member from Chicago who connected with a fellow Stage 32 member, Robert James Atton through the site. At a time when being entrepreneurial is essential to creative success, Robert and Donnalyn are working together to get her project made! It is extremely satisfying to watch like minded creative people support and empower each other.

As Donna explained, “I practically jumped out of my seat when I read "I'd like to produce and direct this," beneath the synopsis in the logline section of my profile! It was awesome to learn that, FINALLY, someone wanted to produce my original 40 page paranormal horror short film titled, Angered.”

Donna continued, “Much thanks to Stage 32 for all of the different ways to make connections on the site. On another note, the pitch sessions' feedback has greatly improved both my scripts and pitches. I'm getting higher scores on my pitches and requests from producers to read my scripts…”

In November, we welcomed the winner of our 3rd Annual Sci-Fi & Fantasy Screenwriting Contest, Bill Poore, to Los Angeles for his project, Rita and the Eternal Inn. It was an incredibly productive week for Bill! In fact, just before writing his blog entry for me, he was polishing a draft of another screenplay that was requested by a producer during a meeting in LA! Now that is some serious momentum.

As Bill says, this contest was a game changer. The access that Bill has as a result of winning the competition will continue and grow. And as I told him, the team at Stage 32 is committed to helping him along the way. Bill, like all previous winners, has a direct line to yours truly and the rest of the Stage 32 team! We don't leave winners off at the curb. We make sure that the momentum continues and the goals are met. I am so proud of Bill's efforts leading up to his victory and his commitment to the work during his time in LA and beyond.

And finally, in December, Stage 32 announced that screenwriter Eric Jeske was the Grand Prize Winner of our 2019 Feature Writing Contest for his project, Avalanche, and screenwriter Kimberly Britt was Grand Prize Winner of our 6th Annual Search for New Blood Screenwriting Contest with her project Desperate Times. Both Eric and Kimberly will be sent on a round of meetings around Los Angeles with managers, producers, filmmakers, and studio executives by Stage 32. As Eric says, “I am pretty pumped for this next phase,” which is a sentiment we definitely share. 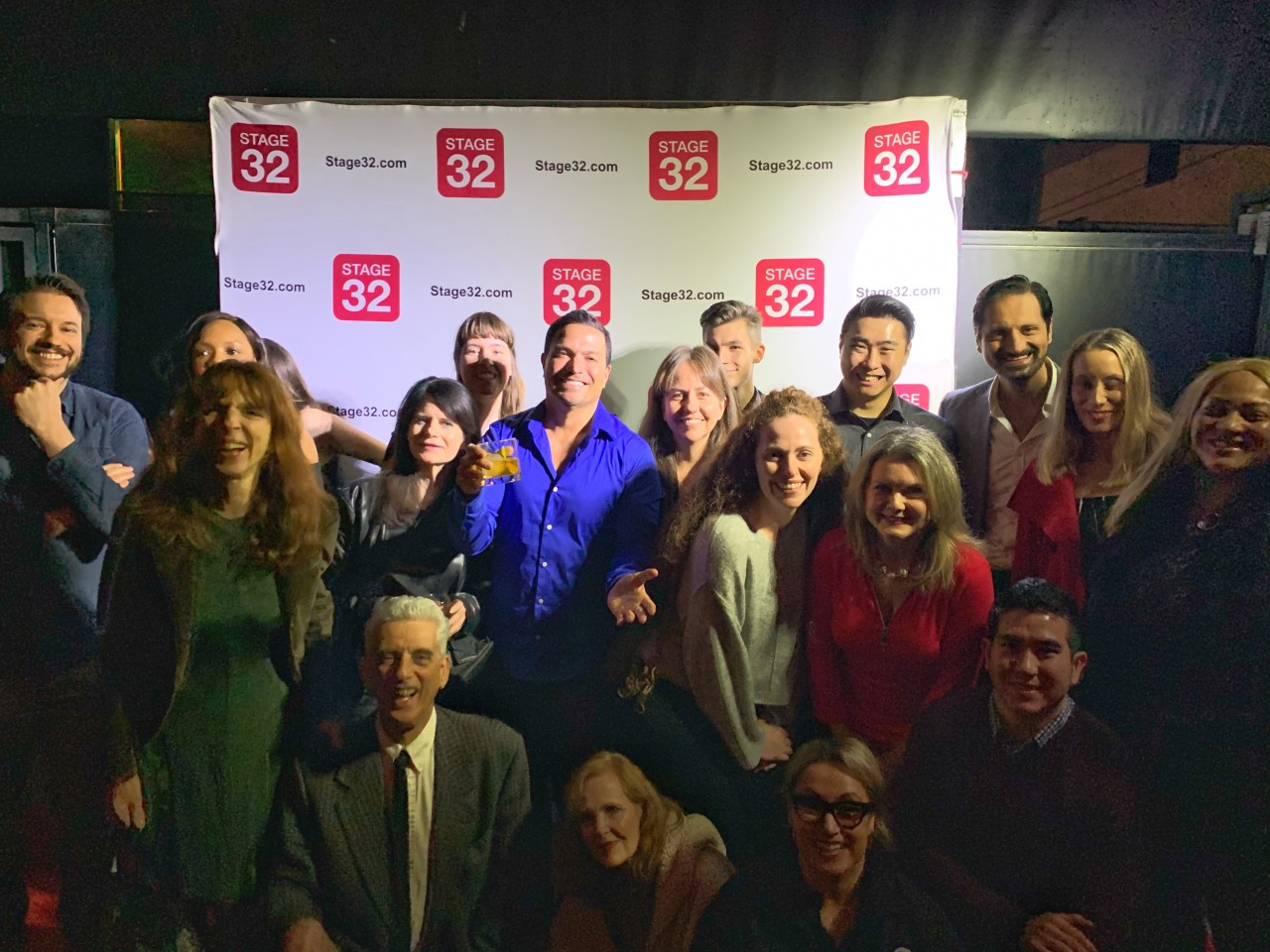 And again, for those of you keeping score at home, that means that so far this year, there have been over 315 writers and other creatives who have made connections and experienced success through Stage 32!

I speak for the entire Stage 32 team when I say thank you for an incredible year! As we charge into the new year, and new decade, remember that you have the Stage 32 team and the Stage 32 community behind you. The entire Stage 32 team is so grateful for the opportunity to work with you, support your goals, advance your creative endeavors, help you confront your challenges, and celebrate your successes. We will be with you every step of the way! In the meantime, enjoy the remaining hours of 2019 and let’s kick of 2020 with a bang!

Reach out to me at j.mirch@stage32.com and let me know what you're working on next year. I would love to hear from you. 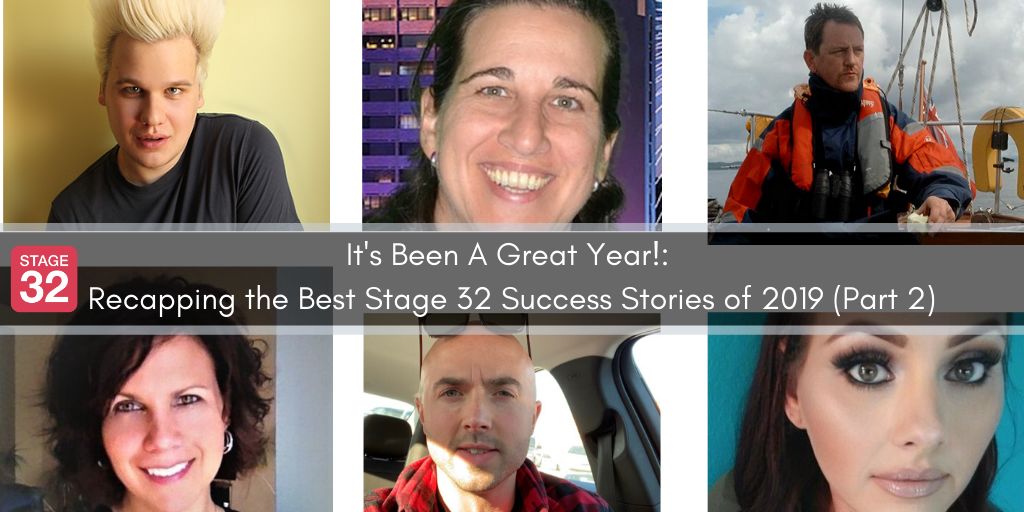