In the February 2015 broadcast of On Stage With RB we were able to increase the number of viewers with our new system, and what a difference it made - there were some great questions! For over 2-1/2 hours RB had on 2 special guests, Tiffany Boyle, VP of Packaging & Sales at Ramo Law, and actor David Banks, who's appeared in numerous features and over 100 commercials. Once the floor opened up for questions, RB hit on everything from filmmaking, acting, distribution and more, and then finished with rapid-fire questions.

Tiffany Boyle went over what a distributer does for a company like Ramo Law, and what they are looking at in terms of the marketability of a property from budgets ranging between $50,000 to $40 million. She talked about the chicken and egg scenario for a project - do you attach talent first, or do you need money first? Tiffany touched on what to expect from both domestic vs. foreign territories. And, importantly, she talked about why “wearing multiple hats" for all people involved with an independent production is needed to contribute to the success of a film. Most shockingly, Tiffany shared her very concrete opinions about theatrical release, and it's probably not what you think. She went over the film festival strategy a good option for a film.

Actor David Banks talked a little bit about if it benefits a writer to take acting classes, or an actor taking writing classes. He lent advice for actors who are just starting out that you should work for free to start to build up your reel, but once you start to get established you should be compensated for what you are worth. He talked about how can you build up a cache by being reliable, showing up, and that you should never be a no-show. He talked about the importance of consuming yourself in the material and don't put it to the last minute. He talked about why it's good to get in good with 5-10 casting directors. He shared Bryan Cranston's best audition advice and how do you “work the room" so to speak, to make a Casting Director remember you. 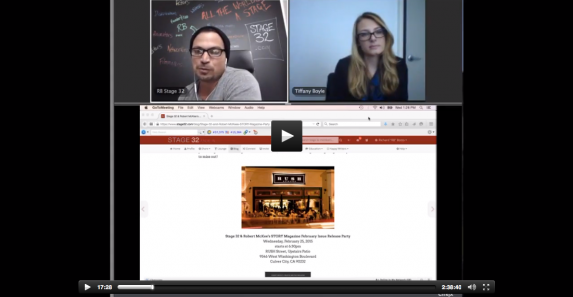 Some of the dozens of questions in the Q&A covered are:


And so much more! The best part, all this knowledge, all this advice is FREE. Enjoy!