Lighting Yourself on Fire

Posted 9 years ago by B. O'Malley 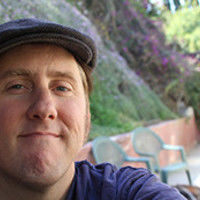 Brian has run the script coverage/analysis company, Screenplay Readers, since 1999, and has worked as a filmmaker and screenwriter for over 25 years. He's written, produced, and directed five feature films of budgets ranging from $50,000 to $200,000, including the werewolf comedy Audie & The Wolf and the Fangoria cult favorite Bleak Future.

He's a tireless worker, a keen observer, and an implementer of lessons learned.

I thank him for his contribution to the community.

And then it hit me: Those Buddhist monks doing that whole self-immolation thing?

My name is B. Scott O'Malley. I'm a filmmaker heading into my 28th year of making movies. I've written and directed five features and produced a few others.

But the times I've ever grown as a screenwriter, a director, a producer - have been when I've been brave enough to light myself on fire.

Hop in this jalopy with me here. Just around the block. I wanna run this by you. You can put your coffee in the cup holder there.

So real quick, how many of your director/screenwriter/producer/actor friends seem to live by the maxim: "If you don't blow your own horn, no one will?"

And how many of them, do you suspect, spend more time hyping themselves on Bookface and Tweeter than, you know, honing their craft as artists? (e.g. "Come see my movie." "Come see my band." "Come see my show." etc.)

But my core focus isn't marketing myself. And believe it or not, it isn't even screenwriting or filmmaking, even though I'm a screenwriter and a filmmaker.

My core focus is improving myself as an artist.

Which means: lighting myself on fire.

That is, after every project I complete, whether it's a draft of a script, or a film I've directed, or a music video I've popped up on YouTube - I immediately begin to tear into it. To take it apart. To see what I could've done better.

Too many screenwriters hit "PRINT" and then gloat over their pages, as if they're turning in the final paperwork for the AIDS cure.

Too many filmmakers smell the plastic sleeves of their freshly-minted feature film on DVD and get so high on the fumes, they end up spending the next 4 years resubmitting to festivals and hoofing one-sheets of their film to anybody with the words "I Buy Movies" on their business card.

It's not just the folks in the trenches. It's big names who suffer when they don't light themselves on fire.

Here's an illustration. Let's look at P.T. Anderson. His first two features were entertaining, but a bit derivative, right? (If Boogie Nights wasn't Casino with more laughs and boobies, then I'm an endangered California Condor).

I'm talking about Hard Eight, Boogie Nights, Magnolia. Those films, they had an emerging talent, a voice, but really no true signature.

But the next few? Punch Drunk Love, There Will Be Blood, etc.?

His signature emerged. An artist emerged. A singular, unique talent in the talentsphere.

The films had more detail, more complexity - they were simply operating on multiple levels, instead of just one or two.

And from where I sit, it didn't happen because he finished Magnolia and said to himself "Yeah, I'm done as a filmmaker. Magnolia is good enough."

From where I sit, P.T. Anderson took a good hard look at the self who made Magnolia...and decided to light that guy on fire.

Put simply, he decided to get better. Clearly.

He decided to grow as an artist.

So the first guy had to die.

Hang with me. Rounding a corner. Don't spill the coffee. I just had this thing cleaned.

But here's the patterns:

Should these super-talented multi-million-dollar filmmakers be damned just because they don't seem to explore newer, fresher themes and methods of storytelling, even within their own darling genres?

No. Silly. Don't make me stab you in the chest.

But imagine a world where Tim Burton was the guy who made 2002's Irreversible, or Robert Rodriguez directed Argo.

Or if Kevin Smith somehow became the Stanley Kubrick of his generation?

And no worries, mate. We'd still have the dozens of mainstream Kevin Smith emulators who got into the business because of Clerks.

And we'd still have people making movies trying to be like Robert Rodriguez. Those kinds of movies wouldn't go away because those artists' voices have been let loose into the zeitgeist.

Man, I would love to live in a world like that - talented directors constantly taking chances, constantly reinventing themselves.

And because I want to live in a world like that, I begin that world with me. (As is the basis of all good schizophrenia cases.)

To wit: As an artist, I don't rest on my laurels. I don't find a groove I can settle into and stay there. Nothing I create is ever good enough for me. In every situation, I could've done a better job.

(And looking at any of my films or screenplays or even my band's is enough to prove the empirical accuracy of the above statement.)

And because I could've done a better job, I light myself on fire, metaphorically, and grow, learning from my experience.

Each and every new project I'm a part of is better than the last. More dramatic. Funnier. More marketable. More artistic. Touches more people emotionally, or even fewer people but more profoundly.

Alright. I've bent your ear enough. Let me wrap this up.

And this might come as a shock to all of us storytellers, whether we're actors, directors, or screenwriters:

But there's no such thing as being creatively blocked.

There's only your fear or your unwillingness to reinvent yourself.

Here we are at the cin'e. I'll park and meet you inside.

Brian is available for remarks and questions in the Comments section below.