Good morning Stage 32 Creative Crew! I hope amidst your busy weekend you were able to carve out some time to introduce yourself to the rest of the Stage 32 community. If not, there is still time! Get in the mix, let people know what you’re working on and see if there are ways in which you can contribute your thoughts and ideas to other posts. It is a great way to get involved with like minded creatives.

We had reach Fall and the momentum has not slowed down one bit from our busy summer! I was just speaking on a webcast with Director of Development Rachel Crouch and Lit Manager Spencer Robinson, who both said this has been their busiest year. Spencer has sold a client’s movie and staffed clients on Netflix and Amazon series, while Rachel has just come back from running a writers’ room and is developing more features and series! They agree development has continued to charge forward.

And that doesn’t even take into account the script requests from executives who are reading scripts they find through Stage 32 through Pitch Sessions and our Industry Lookbooks. Are you ready for this number? In 2020 alone we have had over 1,500 script read requests! That is a staggering number!

In September, Vivek Singhania, a producer whose company, Picture Perfect is based in Mumbai, India asked to be connected Debra Kurtz for her project, When Crows Fly and Octavius Ra for the project, State of Trance, after connecting through a pitch session. Vivek specializes in low-budget feature films that can be produced internationally or adapted for the Indian market.

Producer Cody Lyons of The Octoberists asked to be connected to Nick Brown for the project Angel Three after a pitch session and script request, while producer Carla Westlund of Cake Studios asked to meet Deanna Carlyle for the script Miss Hyde: The Good Seed. Carla also requested to meet with Stephen Wallenfels for Promiseland and Abdur Mohammed for The Anuk Chronicles. 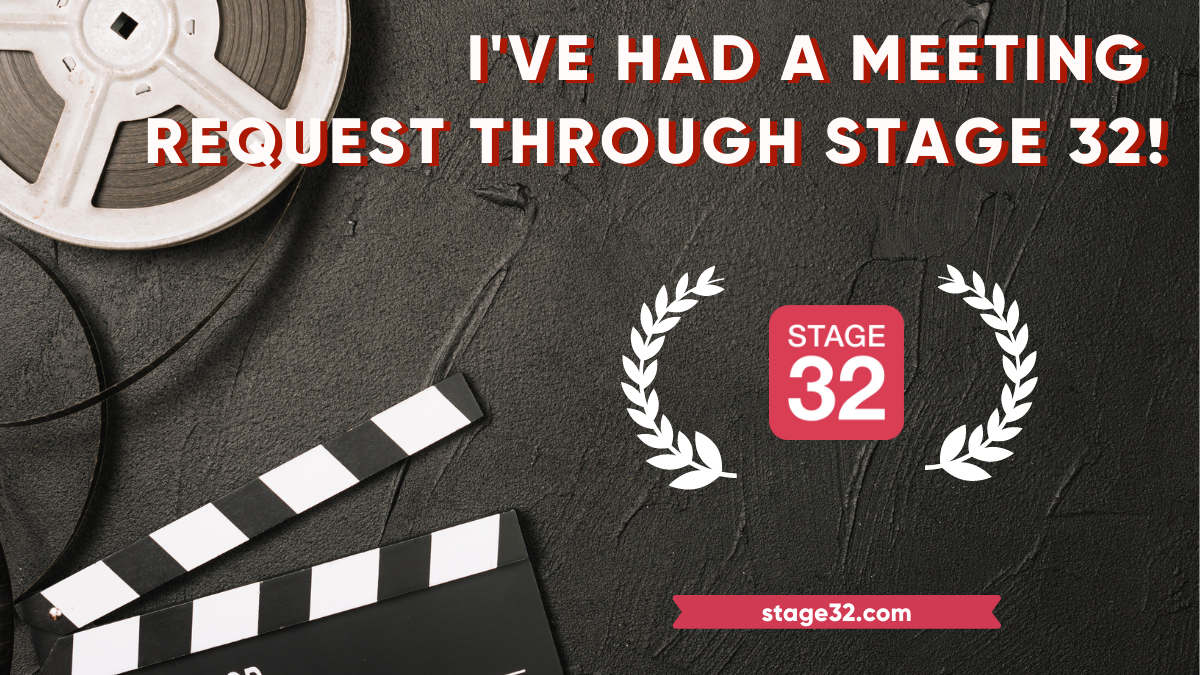 If you have had a meeting request through Stage 32, download this graphic and share the good news!

Producer and Sales Agent Alexia Melocchi of Little Studio Films - who as you will recall earlier this year signed a Stage 32 member to a representation and development deal - requested introductions to Brian Dzyak for Escaping Disposal, Mary Huckstep for William, Will You Dance?, Ted Adams with High Roller, Derek Nelson with The Arc, Sarah Gabrielle Baron for Occupy This, Brent Bergan with Pressure Point, Rashit Ismail with Dona Gracia, Tim Jones for House, Jody Fasanella with Mama Dallas, D. Elliot Woods for 11 minutes, 14 seconds, and Sardia Robinson Foerster.

Producer Derek Gordon - who also recently signed a shopping agreement with a Stage 32 writer - asked for introductions to Allan Turner for A Killer Past, David Page for Like an Animal, and Ty Jones for Why Can't I Keep a Man. Producer and writer Rachel Paulson who is in development on a series, requested to meet with Octavius Ra for the script, F*ckboy, Martin K. Zitter for MZ, and Jeff Willy for Reveal.

Junior Manager Harrison Rothman at Elevate Entertainment asked to meet with Jack Gorman for the script Turf while manager Audrey Knox of The Cartel requested a meeting with Patricia Hickman after hearing the pitch and reading Dead Gatsby. Audrey also requested to meet with Margaret Lebron for The Track, Jack Marchetti with Idol, and Andrew Gilchrist for Big, Scary Animals.

Staying with managers, Lit Manager and Producer Julia Verdin asked to meet Alyssa Carter with the project, For Her (Para Ella) and James J. Papa for the script Killadelphia. Manager Mike Diaz of The Coronel Group asked to meet with Bill Osinski after providing a First 10 Page Review for the script Ungodly.

Development Executive Thomas Pemberton - whose company Mind’s Eye Entertainment has already optioned 3 television series ideas from writers through Stage 32 - requested to meet with Travis J Opgenorth for Thieves, York Davis for the scripts Joseph and the Holy Grail and I Love You, Oscar Wilde, Dane McCauley for The Brothers Fury, Matthew J. Beier for The Breeders, Martin K. Zitter for Love the Ones You're With, David Allyn for Kellyanne, Bill Osinski for Victoria the First, Nicholas Tana for eJunky, Michael J Shapiro for Run! Run! Run! - The Lives of Abbie Hoffman, and Carole Ryavec for Embargo: Syria.

Producer David Harris - who has a deal with Millennium Films - asked to meet with Jane Bennett Munro for The Body on the Lido Deck: A Toni Day Mystery and David Page for Head Games, while Rachel Crouch of Cold Iron Films who I previously mentioned said development has not slowed, asked to meet with Shaun McConoughey for Tradition Never Dies.

Producer Brett Glatman who is producing Oscar-winner Peter Farrelly’s next film for Skydance, asked to meet with Morreco Coleman for 1st Forgotten Champions, Staton Rabin for The Babe is Back, Raymond Reid for The Bailout, Erik Howard for Killing Squirrel Creek, Chantelle Erin Landais for Playa, and Kelly Shanley for Wingmom.

Sarah J. Cornelius the Development and Production Executive at Whitewater Films - who just released their latest film in September - asked to meet Matthew J. Beier for All is Calm and Michael J. Shapiro for My Summer of 1967. And finally, Wes Ambrecht of Foundation Films asked to be connected to David L Weston for The Woman with No Name.

As I said before, all of these connections came as a direct result of Stage 32 Script Services which allows for direct access between content creators to decision makers in the entertainment industry. Please join me in congratulating these incredible Stage 32 members on their continued success through the platform! 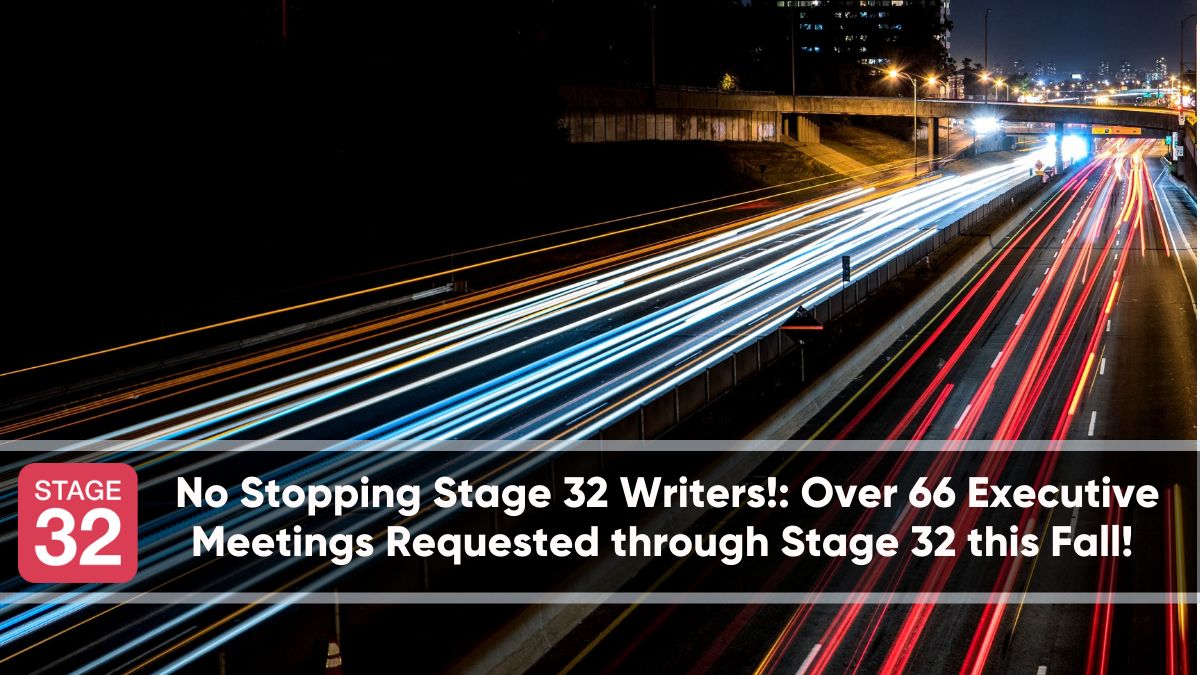