It's that time! The June edition of On Stage With RB is scheduled!

For those of you who might be new to Stage 32, every month we do a FREE online broadcast with our Founder & CEO, RB. Our community tunes in from all over the world as RB talks about the latest and greatest site features, has on special industry guests and and spends at least 90 minutes answering questions about the industry, your chosen discipline and just about anything else that's on your mind!

We encourage you to register for this LIVE webinar, which takes place Tuesday June 30th at 1:00pm PDT. The first 2,000 members who register will have FREE access to the live webinar. If you cannot make it, don't worry, you'll still be able to see the webinar for free On Demand in our EDUCATION section (plus, you can see all our previous On Stage With RB broadcasts there now!) 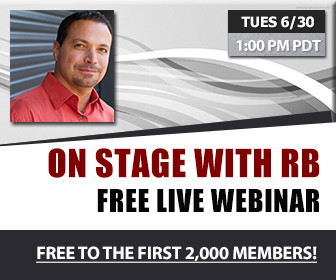 Don't Lose Your Spot - To register for On Stage With RB click here!

To see all previous On Demand On Stage With RB broadcasts, click here!

As always, we welcome thoughts and remarks on the content above in the Comments section below...

On Stage With RBStage 32Tips