Welcome to the weekend, everyone. An Introduce Yourself Weekend and an Oscar weekend at that!

Before we get started, a quick word about David Carr, the brilliant New York Times reporter and one of my writing heroes, who died suddenly last Friday at the all too young age of 58.

As a writer, Carr entered my orbit while writing for the Atlantic Weekly, New York Magazine and Inside.com. I was taken by his brash, straight forward, no holds barred style of reporting. I was thrilled when he joined the New York Times in 2002 as a cultural reporter. Instantly, his Carpetbagger, and later his Media Equation columns became must reading for me.

A short time later, Carr came into my personal orbit while I was publishing and editing Razor magazine. I won’t get into all the details here, lest I get misty. But, he was a true gent and his passion for journalism, and integrity in journalism at that, always captured my heart.

Much has been written about Carr’s troubles with drug addiction, but no one wrote about it more poignantly and pointedly than the man himself. And that was the beauty of David Carr. He was a man who was unquestionably fair to the subjects he covered and while managing to be fair to himself. He will be terribly missed.

I would urge all to check out the documentary Page One: Inside the New York Times where Carr is unquestionably the star of the show, as well as his raw, searing, naked memoir The Night of the Gun: A Reporter Investigates the Darkest Story of His Life. His Own. You won’t be disappointed.

I’ve also included a couple of great articles about Carr under ENTERTAINMENT NEWS including highlights from a speech he gave to journalism students at Boston University’s communications school.

I thank David for the memories and the inspiration. May he rest in peace.

Now back to your regularly scheduled programming.

As mentioned, it’s Oscar Weekend! Hope you’ve entered our contest. If you haven’t you can do so here. Also, for the 4th straight year, I’ll be live Tweeting the awards over on Twitter. You can follow me and the action here. Come join me, we’ll have a great time. But in the meantime, I have plenty of Oscar related information under ENTERTAINMENT NEWS including a look at an Oscar voters brutally honest ballot, a plea to hold the Oscars as if it were a political election and an exclusive Oscars voting poll that’s quite revealing.

Also under ENTERTAINMENT NEWS, a look at the ASC and WGA winners; the new Hollywood trend of turning documentaries into full length narrative films; a filmmaker explains why he shot his film on an iPhone 6; a list of short film filmmaker grants; The Breakfast Club turns 30; Sarah Jones parents ask for a moment of silence; YouTube stars are getting signed to WME; Amazon greenlights 5 more shows and much, much more.

I have some really cool stuff under VIDEOS including a look at how they did the “single take” in Birdman, a video essay of Werner Herzog’s view on nature (yep), the complete video of David Carr’s last interview with Edward Snowden and Laura Poitras, the director of Citizenfour and a look at how Patricia Arquette left her ego at the door while filming Boyhood.

Under TIPS, I have filmmaking, screenwriting and voice acting info.

It’s been a crazy few weeks around here. Parties, events, panels, conferences, film premieres, contests, educational offerings and more. We’ve collected all the goings on under STAGE 32 NEWS. We also had a terrific Stage 32 meetup in Hollywood last week. There are plenty more forming all over the world. You can find those under STAGE 32 MEETUPS.

Additionally, it was a record week for Lounge posts. We’ve highlighted some of the most commented on and intriguing under POPULAR AND INTERESTING LOUNGE DISCUSSIONS. Also, it was a banner week for Stage 32 members. Get inspired and send a note of congratulations to the subjects of this week’s STAGE 32 SUCCESS STORIES.

Finally, as mentioned at the top, it is Introduce Yourself Weekend here on Stage 32. Over the past 10 days or so, over 8,000 new members have joined this rapidly growing community. That means there are potentially 8,000 new creatives for you to network with. I urge all of you, whether you are new or a veteran of the site to not only make a post, but to welcome and engage others who do as well.

As I’ve been saying for the last 3 years, you never know when you are going to make a career or life altering connection. Perhaps today is the day.

As always I thank you for the support. I hope you enjoy the content. I welcome you to discuss and debate any and all of the material below in the Comments section.

Have a wonderful weekend and I hope to see you during my live Tweeting of the Oscars on Sunday.

RB
STAGE 32 NEWS
It’s that time again! Time for the February 2015 edition of On Stage with RB. Every month our Founder & CEO, RB, in a webinar setting goes over the best way to use Stage 32 to help your career. He brings on special guests who work in the industry, such as literary managers and development executives to offer advice to our community. Afterwards, he opens up the floor to you for a live Q&A session about anything and everything in the industry. Best of all, this is FREE, exclusively for Stage 32 members. To read more and to get a spot in February's On Stage with RB, click here: On Stage with RB

Mark your calendars! Please join Stage 32 and Robert McKee’s STORY Magazine as we celebrate the release of the February 2015 issue featuring our own Founder & CEO, Richard Botto on the cover. Open to all filmmakers in LA who are Stage 32 members, this is a fun meetup talking about film, writing, producing and all the things we love. In addition, there will be some great Stage 32 giveaways! You don't want to miss out! To read more and to RSVP, click here: Stage 32 & Robert McKee's STORY Magazine Issue Release Party​

Join Stage 32 for our 3rd annual Stage 32 Oscar Contest! Every year we invite our Stage 32 community to vote on your choice for the Oscar winners. The 10 entries with the most correct will win awesome prizes. Last year's winner, Mike Breen, set a pretty high bar nailing 23 selections. Let's see if anyone can beat that for 2015! All you have to do is go down the list, point, click, and submit. It's that simple. To read more about the contest, click here: 3rd annual Stage 32 Oscar Contest

This week, our Founder, CEO and fearless leader RB was a guest on Stage 32 member Dave Bullis' popular filmmaking podcast. On the podcast, RB and Dave discuss a wide variety of topics including RB's experiences at this year's Sundance Film Festival, how to market yourself, the state of the film industry and were they think it's headed, RB's latest screenplay and then closed the discussion with RB going into depth about his new book on crowdsourcing. To hear the podcast, click here: RB on the Dave Bullis Podcast

NEXT LEVEL EDUCATION OPPORTUNITIES
Tuesday 2/24 at 1pm PST Stage 32 Next Level Webinars presents How To Pitch Your TV Pilot To Cable Networks with host Jordan Barel, TV Dept. at Abominable Pictures (Burning Love and Children’s Hospital on Adult Swim). Host Jordan Barel will teach you both how to pitch your pilot and how to tailor your pitch to the right cable network. In addition, he’ll go over what kind of shows live on each network currently, and what may be the right fit for you. You will walk away with a clear understanding of how to pitch effectively (information you can take with you over to the Happy Writers Pitch Sessions!) as well as a clear understanding of how to make your pilot what each network is looking for. To read more about the webinar, see a video from Jordan and to sign up, click here: How To Pitch Your TV Pilot To Cable Networks

Thursday 2/26 at 1pm PST Stage 32 Next Level Webinars presents How The Pros Rewrite: Essential Rewriting Tools and Techniques hosted by Corey Mandell, screenwriter and screenwriting coach who has written projects for Ridley Scott, Harrison Ford, Julia Roberts, Warner Brothers, Universal, 20th Century Fox, Paramount and Walt Disney Pictures – just to name a few. Corey Mandell will walk you through the entire rewrite process – from first understanding how your story reads in other people’s heads (and why that is important!) all the way to correcting structural weaknesses in your script. He will break down rewrite memos, notes, and narrative cohesion, leaving you with a comprehensive overview of how to do an effective rewrite and how to immediately apply it to your own work. To read more about the webinar and to register, click here: How The Pros Rewrite: Essential Rewriting Tools and Techniques

Saturday 2/28 at 11am PST join Stage 32 Next Level Webinars for Producers: How To Find and Vet Great Scripts with host Joe Russo, who has worked on projects with FOX, SyFy, A/E, Lionsgate Films and Universal Studios.  In this webinar, Joe will explain from an executive’s point of view the best ways to find and identify a great script. He will also dive into how Hollywood producers analyze material and determine if it’s worth taking on, so you can learn to do the process just like the pros do. You will leave this webinar with a clear understanding of how and where to find great undiscovered scripts, as well as how to analyze the material to make sure you’re setting yourself up for success. To see a video from Joe, read more about the webinar and to sign up, click here: Producers: How To Find and Vet Great Scripts


STAGE 32 SUCCESS STORIES
POPULAR AND INTERESTING LOUNGE DISCUSSIONS
STAGE 32 PLANNED AND PROPOSED MEETUPS
ENTERTAINMENT NEWS
VIDEOS
TIPS Like this blog post? Please share it on social media (Facebook, Twitter, LinkedIn, email etc) by using our shiny new social media buttons at the top of the blog. Or post to your personal blog and anywhere else you feel appropriate. Thank you.

As always, we welcome thoughts and remarks on ANY of the content above in the Comments section below...
0 0
SHOW MORE

There are now 1888 blog posts for you to enjoy. Search them all by tags below. 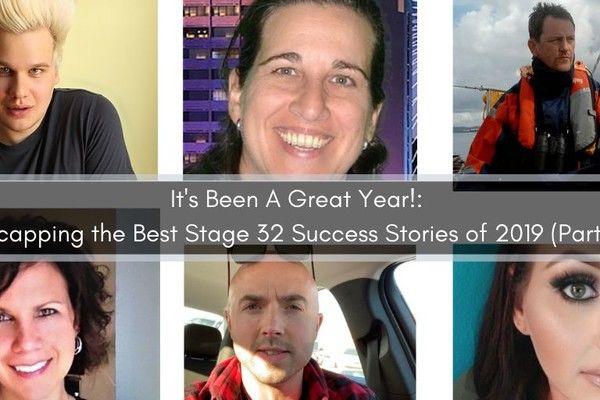 Calling All Screenwriters - Join Us for National Screenwriting Day Tomorrow!

Movement, Contemplation, and Soul Renewal for the New Year

2 New Yorkers In Hollywood: Advice for Filmmakers in Countries Outside of the US (with Richard Botto & Bradley Gallo) 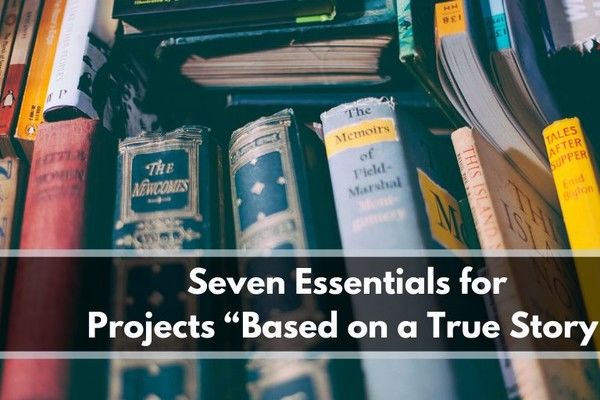 Seven Essentials for Projects “Based on a True Story”