Rejection Doesn't Define You... On To The Next!

Posted 7 years ago by Victoria Park 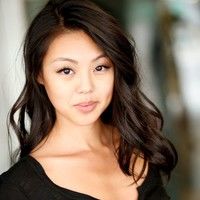 Richard "RB" Botto
Today's guest blog comes from Stage 32 member Victoria Park. Victoria is an actress, singer, dancer, and filmmaker from LA. Though she got her start in film production, she stumbled into acting and hasn't looked back.

She is most known for her recurring role as head cheerleader Aubrey on ABC Family's Bunheads, and has also appeared on Grey's Anatomy, Revenge, and in numerous films. She is currently in preproduction for her next feature film, Jilted. Now, despite swelling credits and a career on the rise, Victoria has had to deal with her fair share of what all of us have to deal with - rejection. Today she talks about how to handle it.

I thank Victoria for her contribution to the Stage 32 Blog, and I invite all of you to express your opinions in the Comments section below.   Enjoy! RB
Hello Stage 32! I’m here today to talk to you about this little career choice of ours called “Acting”. Let’s be honest, the world (ourselves included before we actually got into this whole mess) gives us this glorified, set-on-a-pedestal, shiny image of a life of spotlights and fame. Even for those of us who chose this career for the “beauty and honesty of the craft” have visions of pouring our hearts and souls into an Academy-award-worthy performance to be lauded by generations of aspiring actors to come.

But if you’ve been in this industry long enough, you know that what people don’t tell you about this thing called “Acting” is that for a majority of the time it bears striking resemblance to something we like to call “Rejection”. 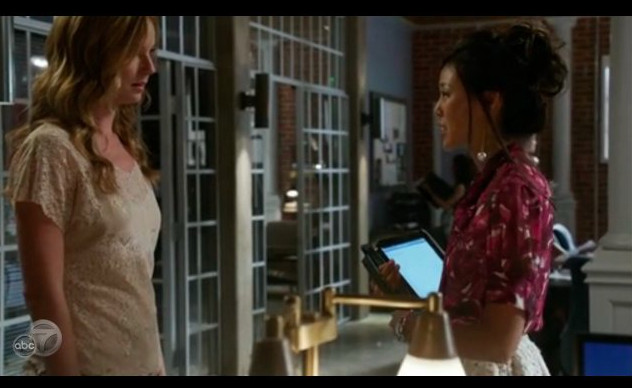 Victoria on set of ABC's Revenge with Emily VanCamp
So let’s talk about that “Rejection” thing for a minute, shall we?

We all know the life of one pursuing this career looks a lot like a rollercoaster ride. Moments of elation and success are followed by moments of self-doubt, insecurity, and our good friend “Rejection”. Not to mention the whole long ride is usually peppered with a fair amount of constant questioning and frustration. Anyone else out there feeling the pain of one of those low places? Let’s hang out and swap stories while wearing matching “Misery Loves Company” shirts. I’ll go first.

Not too long ago I had a producer session for a supporting lead in a studio-backed feature. I was prepared, well rested, fed, relaxed, and wearing a brand new pair of shoes. I had killed it in the audition, and considering I was up for a role opposite some of my biggest comedy heroes, I wasn’t even nervous! The scenes were so funny! I was so funny! There was no way I could fail! 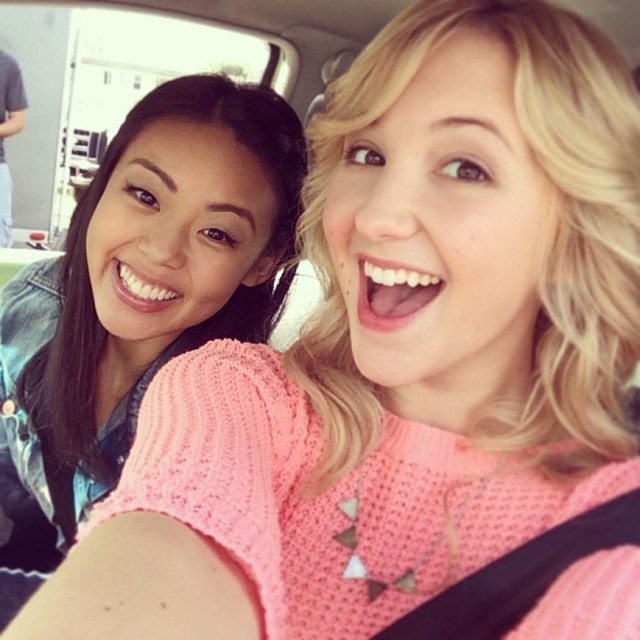 Victoria on set for a Tire Rack Commercial

In reality I was probably being a bit dramatic, but we all know actors have a tendency towards drama so I’m just going to continue as is. Post-THEWORSTAUDITIONOFALLTIME, I sat in my car asking myself question after question… What just happened? Did I lose all my “funny”? How are these new shoes already giving me blisters? STUPID SHOES.

Okay so here’s the thing: in order to succeed in this business, you have to be tough skinned enough to bounce back quickly from the hundreds – yes, hundreds – of jobs you don’t book… yet remain sensitive and emotionally available enough to still be a good actor. It’s a tough balance to walk – believe me, I know – but once you find it, you’ve got a pretty solid foundation to start building on. I’ve found the best way to approach an audition is to simply: be prepared, do your best, have fun… then make like Frozen and let it go. (Are we still okay with “Frozen” references? Or did the millions of Elsa’s running around this Halloween deem that forbidden territory?) 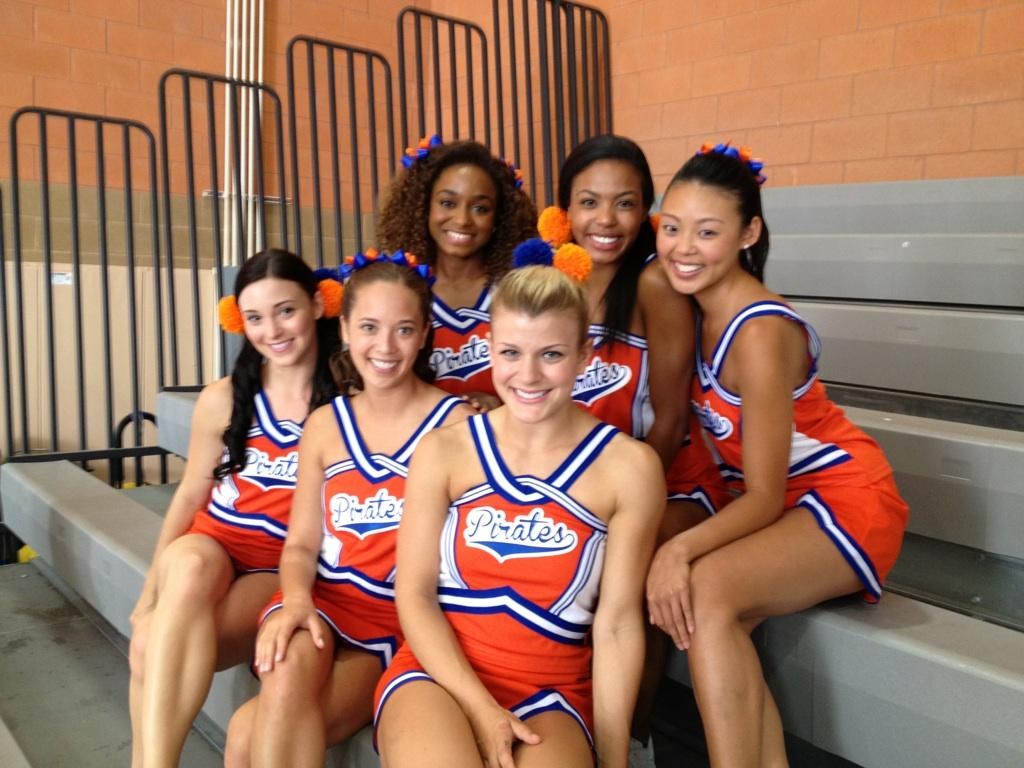 The reality of the situation is, unless you punched the director in the face or made some horrifically racist comment, your worst-audition-of-all-time probably wasn’t all that bad. And even if it was, chances are no one is going to remember otherwise.

Oh, and that whole million questions path I was on? The people who love me best eventually brought me back to normalcy. Because here’s the last step. This “rejection” thing can get pretty rough sometimes. And no matter how good you are at walking that fine line we talked about earlier, chances are you’re still going to need someone to remind you that rejection is just a part of this crazy life we’ve chosen. You’re going to need someone to remind you that you are great. Because even though rejection may define a part of our career, it doesn’t have to define us.

I ran into the casting director for that producer session about a week later. I cringed thinking how she would remember how decidedly un-funny I was at our last meeting… but she surprised me by going out of her way to tell me how great I was. Turns out they decided to go with someone who was actually fifteen years old. And the reality of THAT situation is… there’s no amount of success OR rejection that can take a decade off your age. So on to the next.
Like this blog post? Please share it on social media (Facebook, Twitter, LinkedIn, email etc) by using our social media buttons at the top of the blog. Or post to your personal blog and anywhere else you feel appropriate. Thank you. As always, Victoria is available for remarks and questions in the Comments section below! 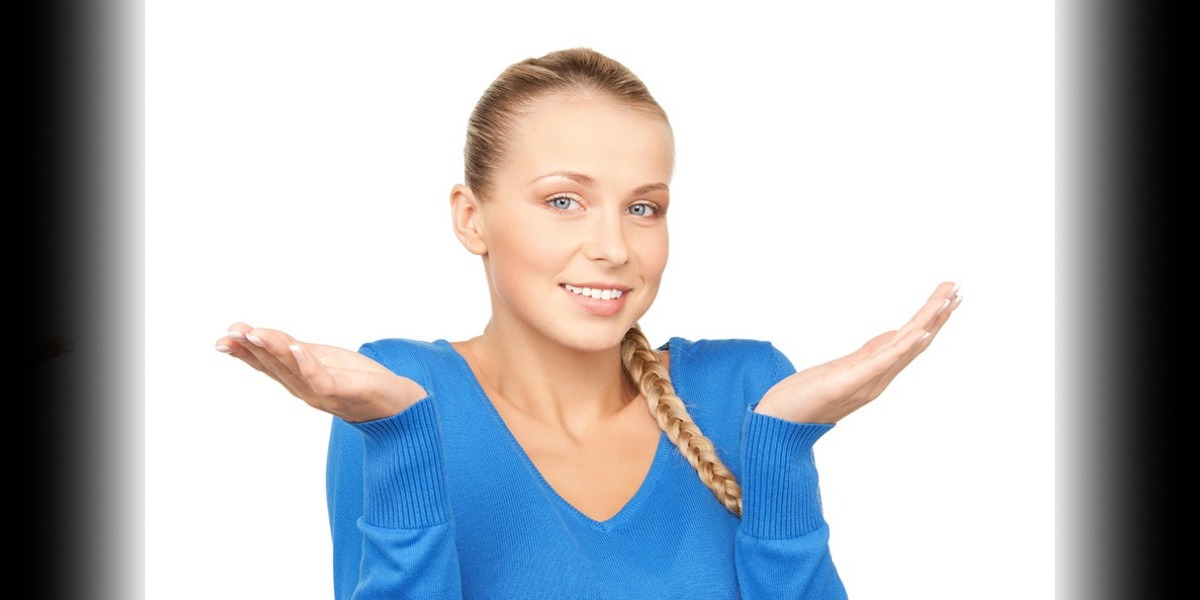