Posted 9 years ago by Bob Schultz 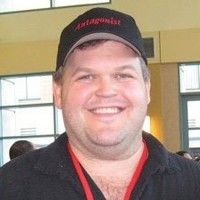 Today, a fun guest blog by Stage 32 member, Bob Schultz. Bob has been the Executive Director of the Great American Pitchfest & Screenwriting Conference (GAPF) for ten years, helping guide it from upstart to the premiere event of its kind. Along with GAPF founder/screenwriter Signe Olynyk, he produced the award-winning thriller Below Zero, starring Edward Furlong (Terminator 2: Judgement Day, American History X, The Green Hornet) and Michael Berryman (One Flew Over the Coocoo's Nest, The Hills Have Eyes, The Devil's Rejects), which is currently on a worldwide tour of film festivals, and is available for purchase from Amazon. Bob and Signe are currently producing the zombie thriller Breakdown Lane, which Bobalso wrote.

With the recent release of Below Zero, and the changing face of the film industry, more and more independent producers are turning toward "Man In A Box" stories to get their films made. When Signe Olynyk and I created Man In A Box Films, we were attracted to the writing challenge of putting a limited number of characters in one location. With only story, character, and theme to rely on, the end result is stronger stories on a manageable budget.

But we are far from the first filmmakers to put a man in a box. Here are the five best MAN IN A BOX FILMS. To qualify, a film must have very few locations, small casts, and few-to-no special effects (sorry, Die Hard). Any genre will do (though we focus on horror and thrillers).

Unless you hold the rights to The Avengers or The Hunger Games, which offset risk with a built-in audience, it is going to fall to the writer to reduce risk for a producer in other ways. With a strong story and engaging characters, a writer can build a script that commands an extremely limited budget and attracts a name cast, to boot. With limited scope, your story can be even stronger, attracting producers, both with the budget and the quality of the script.

In an age when literally anything is possible on film or in screenplays, the unique challenge of confining characters to very few locations presents a lot of advantages (low budget, stronger characters, no deus ex machina temptations), and incredible challenges for the screenwriter who chooses to go this route. Inner conflict has fueled movies since the dawn of cinema. Without so many external obstacles available as tools to the writer, the story is forced to turn inwards and discover the strengths and flaws in your protagonist and your writing

We are always looking for unique, exciting horror/thrillers that fit the Man In A Box structure. If you have one, please pitch us! Send your logline to info@belowzeromovie.com. And here's hoping you can write yourself out of any box that traps you.

And don't forget to check out Below Zero on Amazon!