Posted 9 years ago by Jack Marchetti 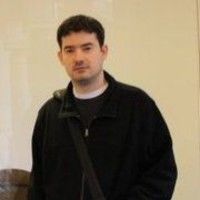 Every member of this community is a creative. That means every member of this community is a master procrastinator. We push ourselves, but sometimes only so far. We put off today what we can do tomorrow (or the next day, or the day after that). We find comfort in the luxury of time. But what if there was a time limit on your dreams? How would you react? How would you seize control of your destiny?

Jack Marchetti was born and raised on the southwest side of Chicago. A software developer by trade, Jack's dream is to write screenplays and direct films. But here's the inciting incident of this story: Jack is diagnosed at an early age with a retinal disease which leads to incurable vision loss. Jack is going blind. Jack is 32 years old.

After years of seeing his projects get caught up in the Hollywood machinery, Jack has decided to take matters into his own hands. His quest is inspiring and exhilarating. His story a reminder that every minute is a gift to be savored.

I love technology. Without it, I'd be unemployable. I'm a software developer, more precisely a back end developer. I write code that ties a front end or what we call the presentation layer to some form of business logic or middle tier, which then in turn saves its data to a data store - also known as a database - though it could be a flat file, xml document, or what not.

What does any of this have to do with film making?

One of the things that attracted me to screenwriting was the syntax of it all. A computer program follows a strict set of "rules" that if not adhered to will cause your program not to work. Similarly, a screenplay is a cleverly orchestrated series of instructions that when written and performed correctly should culminate in a good movie. (Wow, I completely took out the entire romanticism behind writing and film making with that - kinda like Highlander part two. They were Aliens? Really?)

So when I'm not writing software, I write screenplays. I'm currently raising funds through Kickstarter to shoot my favorite one called 4 of a Kind. It's a script I've been working on close to a decade. It placed in some contests and was a Top 100 semi-finalist in the last season of Project Greenlight. After dealing with contradictory notes over the years, a producer friend of mine suggested we just shoot the thing ourselves.

What gives this filmmaking experience a poignant twist is that I'm going blind. I was born with a degenerative retinal disease called cone-rod dystrophy. Read about it, it sucks. In a nutshell, my photo receptors which help perceive light, movement, color, etc... are dying off. Why are they dying off? Because of some stupid gene abnormality which somehow managed to survive through millions of years of evolution.

Shooting the movie will be a bit more difficult than normal. I mean, I've seen the movie, I've directed it in my head, but the process of actually capturing the movie onto film (or more likely REDMAG cards) will prove a tad bit more daunting than any other would-be first time director.

I realize I need help with 4 of a Kind and I have zero connections to the Chicago film community. I'm your typical introverted software developer. I'm more comfortable telling a compiler how to recursively parse through a data set using C# than meeting people for drinks and pitching them on why they should work on my film.

So how did I meet other talented filmmakers and production people? If you're a slave to the Internet like me, I was comfortable in cyberspace and found Stage 32. It was a great way to start. When I decided to make this film I knew I needed a really talented and experienced Director of Photography, not only for the obvious reason of making the film look great, but because that person will basically serve as my AD. I found Brian Levin on Stage 32 and watched his reel on Vimeo. Check it out and you'll realize why I stopped searching after that.

I found a photographer named Sarah Little to provide production stills while on set. She's young and eager so I'm sure she'll wear many hats as a member of the crew of 4 of a Kind. She and I both share a fondness for Qdoba over Chipotle as well.

Finally, one of my early ideas for my Kickstarter video was to make an animatic trailer for the script. I wrote one, hired some talented actors including Chris Ashworth who you may know from The Wire and Christina Rose an up and coming actress in New York (she's probably in LA by the time you read this). There were several other parts that needed to be filled and I found Brian Hendrickson on Stage 32. He actually did voices for almost every character and he was fantastic.

Sadly, we ended up not using the animatic trailer as it just didn't work out with the animation studio. Things happen. But, what's the point of all this? It's an awesome time to be a filmmaker. You can find talented people who are very eager to help you and work on your project. Stage 32 has proven to be a valuable resource for those in the entertainment industry. I'm looking forward to meeting and working with even more Stage 32 talents as 4 of a Kind goes in to pre-production. If you'd like to learn more about my film, visit here or check out the 4 of a Kind Kickstarter campaign.

Jack is available for remarks and questions in the comments section below. Feel free to join the conversation.