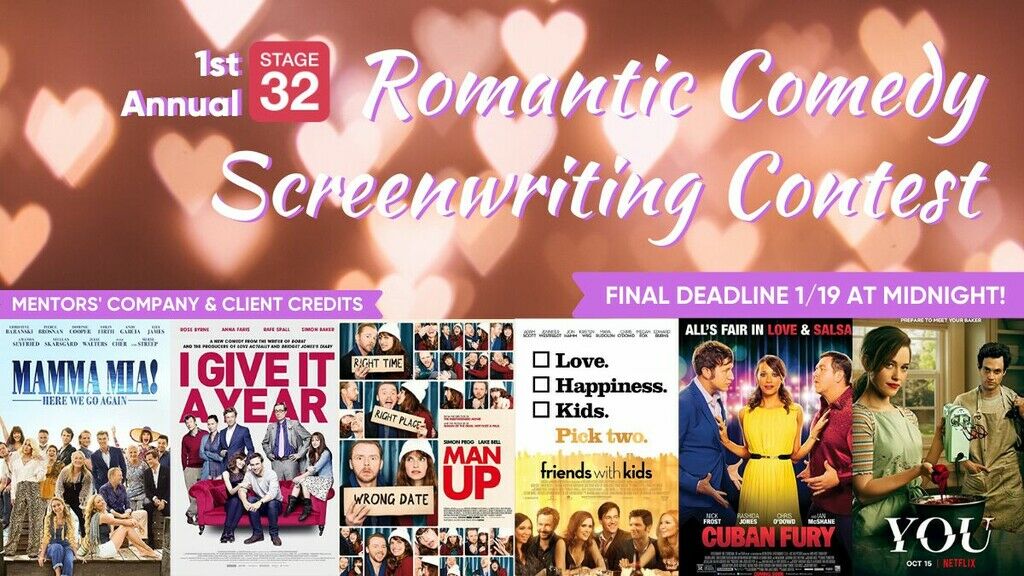 Love is in the air! Stage 32 is thrilled to announce our 1st Annual Romantic Comedy Screenwriting Contest!

This year’s Grand Prize Winner will be flown to Hollywood to meet one-on-one with our judging and mentoring panel whose credits include the smash Romantic Comedy hits MAMMA MIA 2, MAN UP with Phoebe Waller-Bridge and Lake Bell, WE ARE YOUR FRIENDS with Zac Efron, I GIVE IT A YEAR with Anna Ferris and Rose Byrne, and more!

What better way to celebrate the holiday season than with some love and laughter? We’re looking for Romantic Comedies like recent hits TO ALL THE BOYS I’VE LOVED BEFORE, CRAZY RICH ASIANS, or THE BIG SICK to spread the joy this year. With 90’s nostalgia spreading through all of pop culture, it’s the perfect time for the next big rom-com! Our judges can’t wait to fall in love with your script. Don’t miss this opportunity to have your work read!

Nowhere else do you find top judges and mentors like you do on Stage 32. The Grand Prize Winner will meet with an incredible panel of judges from companies that have produced some of the great Romantic Comedies in recent memory including MAMMA MIA 2, FRIENDS WITH KIDS, MAN UP, and other hits like Netflix’s Dark Rom Com smash “YOU”, I GIVE IT A YEAR, DUMPLIN’ and more! If you write Romantic Comedy, this contest could launch your career! Streaming services love rom-coms, and are always looking for new material - your time to strike is now. Whether your characters are quirky and cute, or sarcastic and snarky, our judges want to see how they end up together! Bring a fresh twist on the class meetcute and take it from there!

The Grand Prize winner will be flown to Hollywood to meet:

Watching a Rom-Com is like drinking a mug of hot cocoa - soothing and sweet. If you’ve been working on a romantic comedy script, it’d be our treat to read it. Give us the pleasure of reading your work, and we’ll make sure others get it too!

Romantic Comedy is a always a fun genre to put a twist on. We're looking for any feature length script that has love and laughs. Feel free to enter traditional rom-coms, or more modern ones - our judges want to read them all!

All sub-genres of Romantic Comedy feature film screenplays are welcome. Please no series or shorts.

Julia Verdin is the Founder and President of Rough Diamond Productions & Management and is one of the leading independent producers and managers in the industry.

As a producer, Rough Diamond has packaged, produced and obtained financing for over 30 critically-acclaimed projects $10M and under such as THE MERCHANT OF VENICE, STANDER, THE UNWILLING, THE LEAST AMONG YOU, TEMPTATION and 2 JACKS.

Julia's award-winning social awareness short film LOST GIRLS, which she wrote, produced and directed has recently been turned into a feature film, LOST GIRLS: ANGIE'S STORY, which is in post production.

Rough Diamond is especially interested projects with interesting back drops and well-developed lead characters. Thriller, family, rom-com, action and psychological horror features are a plus, as well as social impact projects.

Liska Ostojic is the Head of Development for 120E Films, a company run by filmmaker Pin-Chun Liu. The company's second feature, TEST PATTERN (read about it in Variety), was released February 2021.
Focusing on stories of diverse and underrepresented voices for an international market, 120E Films is interested in short-form and feature-length content that is timely and impactful.
Previously Liska has worked at Dreamworks Animation. After graduating with an MFA from the American Film Institute Conservatory, Liska co-wrote the award-winning shorts CONTRAPELO and WAY IN RYE, as well as numerous commissioned features.
Her passion remains collaborating with and mentoring writers, discovering wonderful stories that deserve to be told, and championing ones that will make a difference in the world.

Tessa Shaffer is a Literary Manager with Corvisiero Literary Agency, a boutique agency in NYC that represents both authors and screenwriters. The clients of CLA include many New York Times, USA Today, Wall Street Journal, and Amazon #1 Bestselling Authors.
Tessa just signed a writer after connecting through a Stage 32 pitch session! She says, "Thank you for adding such a valuable connection for writers and execs."
Corvisiero Literary Agency has a growing relationship with networks and producers and has successfully negotiated book-to-film deals, most recently FOREVER MY GIRL to Roadside Attractions and Disney International with LD Entertainment producing.
CLA is currently looking for made-for-TV movies that would be a good fit for Hallmark or Lifetime as well as high concept, YA, and drama content for streamers.