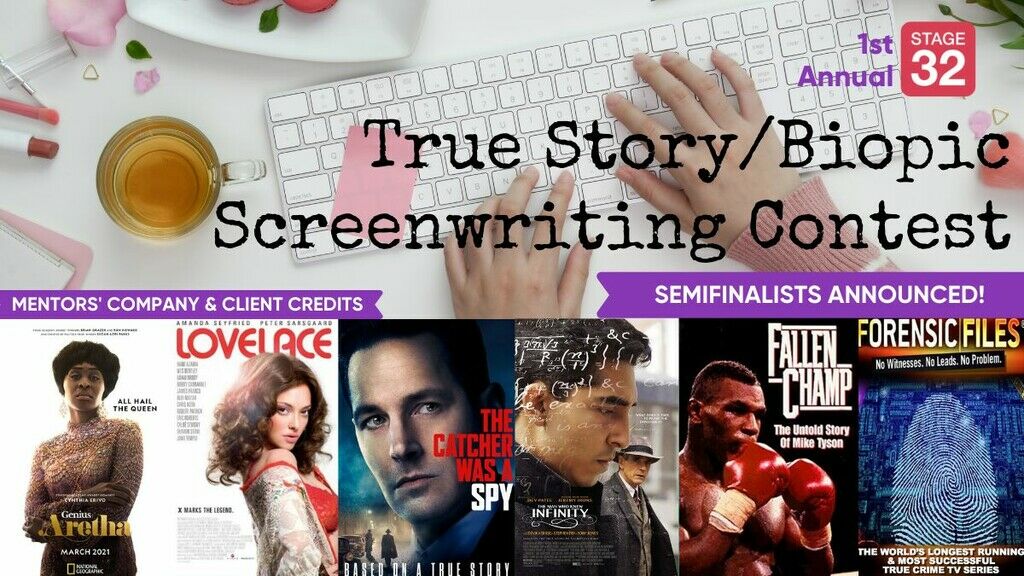 THE SEMIFINALISTS HAVE BEEN ANNOUNCED

SCROLL DOWN TO VIEW THE SEMIFINALISTS!

Open to both Feature Script and Television Pilots!

THE CATCHER WAS A SPY, LOVELACE, THE MAN WHO KNEW INFINITY, and more! The Grand Prize Winner will also be flown to Hollywood to meet one-on-one with our judging and mentoring panel whose credits include True Story/Biopic hits GENIUS: ARETHA, FORENSIC FILES and upcoming limited series like THE POISONED CITY, and more!

If the last few years are any indication, sometimes reality is even stranger than fiction - and certainly more dramatic. Some of the most interesting and unbelievable stories come straight from true life experiences. Recent hits like “HALSTON”, SPENCER, THE EYES OF TAMMY FAYE and NOMADLAND prove that True Stories and Biopics continue to capture the hearts and minds of audiences everywhere.

Whether your true story or biopic is meant to inspire, educate, or give audiences a glimpse into a world or a history they know nothing about - we want to hear from you!

It’s time to tell our outstanding judging panel your most unique and personal stories, or your take on history’s most prominent figures. Don’t miss this chance to have them read your work! This competition is open to both Feature Scripts and Television Pilots!

Nowhere else do you find top judges and mentors like you do on Stage 32. The Grand Prize Winner will meet with an incredible panel of judges from companies that have produced some of the great True Story series and films in recent memory including GENIUS: ARETHA, THE CATCHER WAS A SPY, LOVELACE, THE MAN WHO KNEW INFINITY, FORENSIC FILES and more!

If you write True Stories or Biopics, this contest could launch your career! Whether your true story script centers on crime, fame, or everyday life, we want to see them all. Bring us those important stories that haven’t been told before, or a fresh take on a well known story. True stories are so marketable right now - let us get yours out there!

The Grand Prize Winner will be flown to Hollywood to meet:

Jim Young, Producer (LOVELACE, THE CATCHER WAS A SPY)

Congratulations to our Semifinalists!

Congratulations to our Quarterfinalists!

We are looking for compelling True Stories and Biopics of all subjects and genres. If your story is based on a true story or inspired by a true story, or centering on a real person, an event, or a period in history, we want to hear from you!

This contest is open to Feature Length Screenplays and Television Pilots for Limited Series and Recurring Series.

Our contests has produced some of the most sought after material from our finalists and winners. Requests for our finalists scripts have increased year over year and our winners have met face to face with a who’s who of working industry executives and gatekeepers!

Jim Young of Animus Films is a leading independent non-fiction producer, with almost two dozen films under his belt. Jim is currently in pre-production on the Drama UNDER THE MILY WAY with two-time Oscar-winner Nick Vallelonga directing (Vallelonga was the one of the writers and producers of GREEN BOOK).
In August 2020, Jim released CUT THROAT CITY starring Oscar-nominee Ethan Hawke and Oscar-nominee Terrance Howard.
Jim has created a successful career producing true-story films such as THE CATCHER WAS A SPY with Paul Rudd, LIFE OF A KING with Oscar-winner Cuba Gooding Jr., THE MAN WHO KNEW INFINITY with Oscar-nominee Dev Patel, LOVELACE with Oscar-nominee James Franco and Amanda Siefried, and the upcoming film, THE PEOPLE VS. VEGAS DAVE.
Jim has a long history of producing critically acclaimed features and documentaries including YEAR OF THE BULL at Showtime, THE WORDS with Oscar-nominee Bradley Cooper and Zoe Saldana.
Animus Films productions have released through Showtime, Paramount Pictures, CBS Films, Millennium Entertainment, and Image Entertainment. His films have also premiered at the Tribeca Film Festival, Sundance Film Festival, Los Angeles Film Festival, and the Toronto Film Festival.

Sam is currently Executive Producer of "GENIUS", a scripted series for National Geographic Network, which he developed from book to series.

Previously, Phil was a Producer of the massively popular series "FORENSIC FILES" for TLC. Since then, he has been a Showrunner, Director, and head writer for series airing throughout the world. Currently, he is based out of the Washington D.C. area and is an Executive Producer for Story House Productions.

Chris Bellant is a Literary Manager and Producer who, after years of developing film, TV, theater, commercials and digital content, recently launched Waldorf Entertainment.
Waldorf is currently developing a limited series based on Anna Clark’s book, The Poisoned City, which chronicles the events of the Flint Water Crisis, as well as the series DARK IRISH, created by writer Erin Kathleen. The company has several features and a documentary in development, including projects created by clients.
Previously, Bellant worked with SXM Studios to develop branded content, and produced independent films. Previous films include LOSERVILLE, which was released in theaters by MarVista Entertainment and starred Jamie-Lynn Sigler, Matt McGorry and Darby Stanchfield, THE LOST WEEKEND with Tony-winner Reed Birney and Gracie Gillam, LIGHT with Will Pullen (winner of Best LGBTQ Film at the Venice Film Awards), and LIVING WITH THE DEAD (winner of Best Feature at the Aberdeen Film Festival).

Michelle Alexandria is an Executive Producer and Head of Distribution for Light Year Pictures. She has over 20 years working in the sales and distribution and has worked on 25 feature films $6MM and under and knows what gets the attention of both financiers and distributors. Prior to joining Light Year Michelle was Head of International Sales and Acquisitions for Glasshouse Distribution.

Kaleb Tuttle is the Director of Development for Brillstein Creative Partners (formerly Brillstein-Grey Entertainment) supervising all production and development for the company.

Kaleb began his career at Paramount Pictures working directly for the Chairman and CEO of the studio. He then moved to Paramount Television working for the President and Senior Vice President of the television group. There, he worked on hit series including 13 REASONS WHY for Netflix and DEFENDING JACOB with Chris Evans for Apple+.