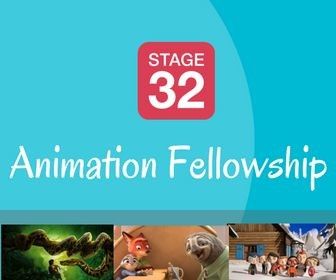 The Stage 32 Animation Fellowship (2017) is closed for submission

Some of the most intelligent and inspirational filmmaking has come to light recently through the incredible work of animators around the world. With recent hits such as Zootopia, Inside Out, Finding Dory, My Secret Life of Pets, My Life as a Zucchini and more winning over global audiences, there is no denying that animation is here to stay. Plus, there is no denying that genius animators are being found from all corners of the globe.

With that in mind, we introduce the Stage 32 Animation Fellowship. Stage 32 is looking to bring animators from around the world the opportunity to be exposed to some of the largest animation industry movers and shakers.

We’re looking to uncover some of the world's top undiscovered animation talent and put your work on a global platform for animation professionals to take notice. One lucky winner will move on to have an animation fellowship with some of the industry's top professionals as mentors. But, it doesn't end there. We will chose the top 5-10 animated films to go on to be screened at Animaze International Animation Festival in Montreal, plus to a global audience on Stage 32.

If you have an animated short film in any genre between 3-10 minutes running time, we will be accepting these submissions to be considered for the fellowship. Bring us your best – either it be a traditional animation, stop motion, mixed media, or more... we want to see it!

This is a rare opportunity to use your animation skills as a calling card in this ever-evolving industry. Show us what you got!

The Grand Prize Winner will win a 1 year animation fellowship. Your mentors include:

Special Global Online Screening: The top 5-10 Animated Short Films will be screened online to a worldwide audience on Stage 32 in a special global event! (This is at the filmmaker's discretion.)

The Grand Prize Winner will win an animation fellowship. Your mentors include:

Special Global Online Screening: The top 5-10 Animated Short Films will be screened online to a worldwide audience on Stage 32 in a special global event! (This is at the filmmaker's discretion.)

Benson Shum enjoys creating and telling stories through animation and illustration. He is an Animator and and Children's book illustrator at the Walt Disney Animation Studio in Burbank, California, and has worked on such films as Frozen, Big hero 6, Zootopia and Moana. He has also worked at various VFX studios including, Sony Pictures Imageworks, The Moving-Picture Company, London (MPC), DHX Media and Prime Focus. Benson's next children's book, Holly's Day at the Pool is out April 2017, and published through Disney-Hyperion.

Tim Allen is one of the world's top stop motion animators having worked on over a dozen animated projects. He's worked with companies such as Aardman Animations, Warner Bro's Animation, Walt Disney Animation and Birmingham's Yamination Studios on such acclaimed films as Tim Burton's Frankenweenie & Corpse Bride, Wes Anderson's Fantastic Mr. Fox, TV series Shaun of The Sheep and Oscar-winning Peter & The Wolf.

Daniel attended San Francisco’s California College of the Arts and received attention for his artwork at an early age. His entrée’s in the Museum of Latin American art and The U.S. District court for the southern District of California, that are still on display, would be the start of a promising career of fine art, teaching, directing, and animating.

When not working Daniel can be lost in thought any given day at a cafe creating his personal work. He also spends considerable time teaching art at various institutions, such as CalArts.

Yvonne Grzenkowicz is the Founder and Executive Director of Animation Nights New York (ANNY). She is a NY Correspondent for Animation for Adults. She is also an Animator and Director at Eyesnare Inc.

Christopher M. Anthony is a BAFTA member and founder of Kayfabe Films Ltd. With over a decade of visual effects experience, Chris has worked on over 2 dozen films including the Harry Potter franchise, the X-Men franchise, Indiana Jones, Jungle Book, Guardians of the Galaxy, Fantastic Four and much, much more. Kayfabe Films has worked closely with many of the leading production houses, post-production houses and film crews and actors in England and the United States. Chris is an alum of both Lucas Film and The Jim Henson Company.

Laurie Gordon is the director of the Montreal International Animation Film Festival and industry conference (Animaze). The festival has a focus on animation for film and technology. She is president of Musivision Films and has worked with Oscar nominee Ryan Larkin, the subject of the Oscar winning film Ryan. Musivision produced Larkin’s followup film Spare Change and documentary film Ryan’s Renaissance. Laurie is currently producing and directing The Flying Animator with Gerald Potterton director of Heavy Metal (1981). She is a native Montrealer of Hungarian descent and holds a fine arts degree in integrative music studies and communications. She is also an accomplished singer and music composer.

Chatrone LLC is one of the preeminent production and management companies in the industry. Their animated feature, The Book of Life was released by Fox starring Channing Tatum and Zoe Saldana. They have offices in Rio de Janeiro, Sao Paulo and Los Angeles (Marina del Rey). They represent writers across the industry as well as produce multiple TV shows in Latin America.

Daniel Stellan Kendrick is a manager and development executive at Chatrone LLC, a production/management company. He worked at International Creative Management (ICM) before joining Chatrone LLC in 2012.

Simon is known for his work as the Head of Character Animation of the How to Train Your Dragon movie franchise for DreamWorks Animation and is currently in preparation for the third installment of the trilogy. In addition to overseeing the animation of the films, Simon has been instrumental in developing the look of the characters, their personalities, and the overall style of the animation.

Simon left his home country of Switzerland to study at the prestigious Les Gobelins Animation School in Paris, France. He joined DreamWorks' character animation team in 1997 to work on their first animated film, The Prince of Egypt. He worked as a Supervising Animator on many of the studio's animated features both in 2D and in CG, including Spirit: Stallion of the Cimarron and the Aardman co-production, Flushed Away. Otto also worked as a character designer on the hit comedy, Over the Hedge.