Animation : Animators, I have a idea! by Tommy Chandler 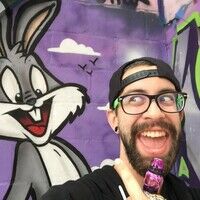 Animators, I have a idea!

Anyone here a fan of the Netflix show "Love, Death & Robots?" Okay, now I know you've heard, read or even written the phrase, "Sending thoughts and prayers," when something has happened and you feel like that's the only thing you can do. WELL... I have this idea of making an anthology like "Love, Death & Robots," called "Thoughts & Prayers."

Thoughts & Prayers would be an anthology of cartoons that is VERY tongue and cheek of the phrase "sending thoughts & prayers." It's a very overused phrase, usually just thrown out there and forgotten. I want to make something that is meaningful and ACTUALLY helps the victims that we send our thoughts and prayers to. If you haven't heard or seen of Seth Rogen's Netflix special called "Hilarity for Charity," he raises money for Alzheimer's by putting on a comedy show. I would LOVE to get together a group of animators to make an anthology of serious, funny, cartoons of things that people would send "Thoughts & Prayers" towards. ALL proceeds would go to people that have been effected by serious situations. Like families that have suffered from family or loved ones dying from Covid, or families that have suffered loss from the riots in the past couple of months. The overall concept would be that we are actually sending more than "thoughts and prayers." We would be sending these families actual support. If you're interested or know someone that would be able to reach a producer for something like this, please hit me up!

Let's send "Thoughts & Prayers" in the form of something that these families will be forever grateful for!

I know this will be a controversial topic, but I'm willing to defend that the phrase, "sending thoughts and prayers," is somewhat useless unless there's some backup to go with it. I truly feel that if this anthology of cartoons is done right, the benefits that come from it will help ease some of the pain and stress for families going through these hard times we're living in. What do you think?

Social media is a powerful medium. I’ve learned about more families and more tragedies just by reading my news feed. My proposal would be either we choose causes to fund like: Color of Change Education Fund, or Fair Fight Action, etc. There are a ton of organizations that we could donate to. Also, just research and paying attention to what’s going on. We can’t help everyone, but helping someone is better than no one, right? Good question, Damian Lloyd

I think you need to team up with a screenwriter ASAP! LOL!