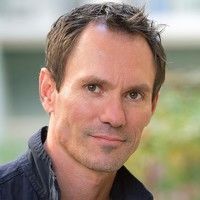 What's your best moment as an actor? I believe mine to be from a few months ago when I was at LAX and happened to notice the actor, Bill Paxton speaking with a British Airways gate agent nearby. Fortunately, at the time, I happened to be sitting across the hallway from the gate area and directly adjacent to the agent's podium. Flight 282 to London would be departing soon and Mr. Paxton was going to be one of its passengers. After he finished his business, luckily, he turned in my direction and I made direct eye-to-eye contact with him. Looking him straight in the eye, I smiled and gave him a small, respectful salute with my hand as a hello. To my surprise, he didn't simply nod and turn away; instead, he proceeded to walk right up to me and with a small smile, he said, "Hi, I'm Bill. Do I know you?" I chuckled and said no, I was just an admirer of his work. He continued to look me in the eye and what came out of his mouth next, quite literally, almost knocked me for a loop. "No really," he continued. "I know you from somewhere." "Huh?" I thought. I positively knew this statement could not be true as I had never met the man - I certainly would have remembered such an auspicious occasion and so I modestly responded, "No, I'm pretty sure we haven't met," and my mind raced for something else to say that would continue this wild and totally unexpected conversational turn of events. Not daring to abruptly or accidentally end our dialog (any conversation with an A-list actor is a good one, right?), I immediately proceeded to quickly inquire about his trip. He said he was on his way to London to meet and act with Tom Cruise in the movie, "All You Need is Kill". He mentioned to me that while working was great, especially with Tom Cruise, he wasn't particularly looking forward to the cold and rain he and his fellow passengers were about to fly towards and into. After that statement, I remember thinking, "Wow. I'd give my right nad to have an opportunity to work alongside of either one of you. Be it in the cold, rain, fog, wherever." We chitchatted for another 60 seconds or so when, yet again, that same notable query came out his mouth to me. "You know, I really do know you from somewhere. I just know I do." Visions of my IMDB credit list compared to his danced in my brain when finally I gave in and told him I was a fellow actor. Indiscriminately, he asked me if he had seen me in anything. I went ahead and mentioned a few of my TV credits when suddenly he said, "Oh! '1000 Ways to Die'. I love that show!" "Wait," he said. "Didn't you play a Russian chess guy?" You know those moments where your heart just jumps right into your mouth from something that's crazy sudden and incredibly stupendous at the same time? Like when you're sitting around the Christmas tree and you open up that gift that's been on your mind for the past 5 years? Yea, that feeling... This was one of those moments. He must have seen my eyes grow in size at least an inch and a half as I somehow managed to inconspicuously pick my jaw up off the floor. After that moment of eternity that probably lasted a mere second or two, would you believe yet another small miracle happened? Bill Paxton, A-list actor himself, then proceeded to tell me exactly what happened in my scene and how I 'died'. This from a show that had aired two years prior to our meeting one another. "Oh man, I loved that scene in that episode," he said. "See? I knew I recognized you from somewhere. You did a great job." Holy cow. Bill "Game Over Man" Paxton just said he likes my work... Right after that, Bill's flying companion walked up and the gate agent announced first class boarding was about to commence. Bill introduced me to the lovely woman he was flying with but before he said his goodbye, he said, "Listen. I want you to call this guy. I owe him my career." And he proceeded to give me the name and number to his acting instructor. "Good luck!" he said, as he left to board his flight. What an amazing turn of events. Talk about being in the right place at the right time, yes? Yes, indeed. Having Bill Paxton acknowledge and say he enjoyed my work is certainly one of my best moments as an actor.

That was a great story...

Good for you, Tom. I love that guy. He's played some of the best sniveling weasels ever; from the ever-whining Private Hudson in "Aliens," to the slick and slimy used car salesman Simon in "True Lies."

Thanks for sharing this, Tom. Great story indeed! Did you end contacting this acting instructor? :)

Great Story. You played it cool. Nice of him to kick you a # See you in the movies...

Great story! Thanks! My greatest moment as an actor (so far) was in college. I was playing BAAL in a student production. Being a Senior, I had been very lucky and had great success getting cast in meaty roles all the way through school...so I thought I knew my shit. Student productions tend to have very short runs, two weekends at most. So you have to get to it if you want to learn anything. I was so obsessed with acting in those days that all I did was learn lines, interpret character, smoke pot and get deep, talk shop to anyone who would listen. I breathed acting. But I have the age-old problem, like many of us, of having two minds on stage: The character's mind; and the actor's mind. The actor is constantly distracting the character and making me drop out of the moment for whatever trite thought about a lunch date or a botched audition, or worse, how cue 212 was dropped by the SM, and how am I going to change my blocking so that everyone can see my beautiful mug for my monologue. Well it was our second to last performance, and the production was quite experimental. The student director had decided to add all kinds of artifice to the elegant, simply brilliant modern Shakespearish gait of Brecht. He cast painters and musicians in character roles, ignoring good taste and quality (in my naive college aged view). By this point in the run I had my lines and blocking so cold, all my intentions decided and re-decided and re-interpreted once again. I was on autopilot. I was doing what I think is wrongly called by many, "Phoning it in". This is a wrong term in my opinion because this is the space where the magic begins. A necessary rung on a ladder that most of us never see the top of. Something else was at work. There was a magical dust that settled over me that night. Somewhere in the middle of the performance, I can't remember when, because, it's magic, things started getting very fuzzy. The veil began to lift for me as a performer, where it never had before, and very rarely ever did again (so far). And when it came time for BAAL to die, begging for his mommy to return him to her bosom, the most basic of all human needs returned at once after a life of incivility and relentless adolescence, rape, murder and abandonment in the name of independence (what an irony!), Zack Rouse was gone. Actor man, with all my analysis, all my judgment, all my opinion, had simply vanished, and where there had been a personality driven by ego to surpass the competition, do everything perfectly and achieve the adoration of professors and peers, given awards and told I no longer have to attend class because I'm just an ACTOR now, there was now a dead BAAL. Blank. Blind. Empty Body-vessel. Actor. I awoke at curtain call, which was one severe bow and an exit, to sit in a chair for half an hour, waiting while my ego returned to me. And fortunately, when I got back, I had no opinion about what I had done that night. I didn't think I was the greatest actor who ever lived. I didn't envision myself receiving an Oscar and thanking the Academy. I didn't care. 60 people watched my performance that night. Hardly world changing. For those who are religious, I will challenge that this is what preachers are talking about. They are talking about a unification of humanity in the internal/eternal world of the "Open Vessel". I will submit to you all that indeed, I ceased to exist for a period of time. The universe had no need for the ego identified as Zack, with its prescribed tastes and opinions. And so for a time, Zack died. And was reborn when the vessel that held this ego was finished with its job of representing BAAL. This is why acting is not an ego pursuit. This is why acting is at its very core the spiritual and solemn endeavor to map the universe. Actors are Astronauts. -ZR

My greatest moment as an actor was to apply for a real job and get out of the music business for awhile. Never seen so many actors after the same gig.

What an awesome and unforgettable encounter! I sure hope you followed up on that mutual contact he passed on to you. :-) Wow, and Paxton is billed with a major role, right up there with Cruise and Emily Blunt on the film he was off to do! Thanks for sharing that.

Great story, Tom! Good for you for acknowledging him and drawing him to you! That's how opportunities are created!

How wonderful! And what a realness to that man. It's probably one reason his characters are so lived in.

GREAT story! I'm a writer, not an actor, but that story resonates with me, for sure. Thanks for telling it.

I met Bill Paxton once in the offices of Earthship Productions. I shook his hand and could only stammer, "I admire your work" before he had to leave. It's times like that when I wish I could come up with something more brilliant and unique than "I admire your work."

LOL. I've done the same thing, using exactly the same words with Shirley McClaine and Matthew Broderick. Both actually looked surprised and seemed to want to chat with me but I was so intimidated and didn't want to impose on them so I just kept on going. Dang, I coulda' had a V8, LOL.

I am pretty sure I ´ve seen you somewhere before, Tom! ;-) Great story, buddy!

when you're rich and famous, pass that name along

Thanks for sharing that incredible story. I guess there are no small parts, etc..... not that you're a small actor. I hope you follow up with that instructor. Marvelous!!!! Gives me hope.

I think my best moment was working with Martin Short!

Nice! Those moments are spice in life's sometimes bland menu. There's a wry humor in it, too. Basically he said, "Hey, I like your work, now go and get some acting lessons." Gotta love it.