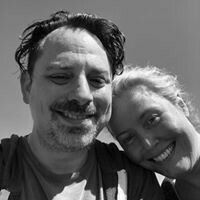 Question for the filmmakers...

Some background first: A short screenplay of mine has been produced and is a couple of weeks away from being completed in post. In fact, they already have a trailer that just needs some color correction. The producer/director would obviously like to get this short into different festivals. Which I hope it does.

Coincidentally, right before they optioned my short, I had started writing a feature length version of the short. So, I've been noodling on that for the past eight months. And have gone through a number of drafts. Done the whole notes and coverage thing along the way. And in early next year I'll submit it to various contests. It's also received a few favorable pieces of coverage (recommends, considers).

So, here's my question.... If the short film catches the attention of either a producer, director.... and/or is received favorably by audiences... does it help to have the feature-script attached to the overall marketing materials? Should it be mentioned to producers, etc if they like the short? Just wondering if anyone has run into a situation like this before, and have some advice on how to approach it the right way.

Big thanks for any pearls of wisdom you're willing to share.

@Jeremy I would definitely have feature script ready but attach it to promo depending on scenario. Eg short film festival they just want the short but I occasionally pitch a film with view to obtaining funds for feature so attach in that scenario. I love your word “Noodling”, I will start to use it cos its new to me. Best wishes with your work.