Filmmaking / Directing : How to make a flop movies? Just kidding read below. by Alan Eddie 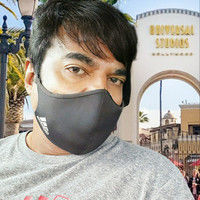 How to make a flop movies? Just kidding read below.

Hollywood is all about who knows who lately.

Amy Schumer directs a movie to make a few million.

If the same movie has any other name, even TV streaming distributors also reject the film.

When you watch those kinds of big-name movies, what would your inner mind tell you?

Those movies had one thing in common, an incredible raw script with many emotions, plots, and twists.

Where would you find such a story?

Do you have one?

Yes, of course, every story writer says theirs is the best.

Here is my mission:

I invite like-minded, talented people to join together to make history.

To create a film with a few accolades from Sun Dance, Austin, Cannes, and Bafta film festival award.

Any award gets a theatrical film distribution from Universal, Sony, Warner, Fox & Paramount.

I am looking for an entire crew for the movie production, including a group of producers.

You can expect a few skills from me.

a) I came across a fantastic script to awe film festival jurors and big film distributors.

b) I produced a few songs for a feature film. (Judge me after hearing those songs, not now...please)

c) Aid you in the directorial gig.

Let us decide the story after analyzing all the available scripts to make history.

Let me know your thoughts.

Thanks, and stay safe.

It's always been who knows who, from Lumiere's era...mingle&pair find suitable souls.

It's only and always been about "who knows whom" because it's always been about budgets that are in the hundreds of thousands even at the "no budget" scale. Festival placement, I hate to tell you, are also about "who knows whom." You can't change that. So embrace the beast and get into the industry. Get to know other filmmakers, big, small, new, experienced... and you will make your way in the industry.

your project sounds wonderful--but a lot of logistics would make it a bit difficult right now. I have a couple of friends who are very adept at filming but until we get over this hump, we can't do anything and even then, working for free is a tough sell. Peanut Butter Falcon and Get Out had some star power behind them...Falcon having Shia LaBoeuf and Dakota Johnson and Thomas Hayden Church and Get Out was only made after Jordan Peele proved himself with Key and Peele for starters. If you think about it, stage32 is one of the best things to have come along to at least help in democratizing the "process" of getting to know people--the exact thing that has been happening for a long time. What's great now is that after a pandemic and all this "stuff" going on they want "fresh voices" so I feel Hollywood has become ever more accessible. I feel ya though, keep creating and keep thinking positively!

your on point ..been there done that since child hood and adult its who you know not what u know

But wondering why the hell people make boring movies for TV streaming?

E J Z, I knew inside stories about both the films.

Get Out movie got Universal distribution when Brian Willams wants to promote his daughter the movie lead artist the NBC night TV host reached Universal head.

Peanut butter falcon movie didn't have Dakota when it won the film festival. A distributor who saw the movie roped in Dakota later for the theatrical distribution value sake.

Shia LaBoeuf wasn't a big actor though his earlier movie American Honey was fantastically directed by a British woman director. Had anyone watched that movie agree Peanut Falcon wasn't so great?

So you need to know how to market a good or bad movie.

Let me know if anyone differs from my rant....lOl

Essentially, boring people make boring movies. Today, any kid with a cell phone can make a movie - and they are!

Alan, good to know. I figured I only knew Allison Williams from Girls. (sheesh my memory doesn't serve here but Lena dunham vehicle--I think it was called just Girls. Not sure if Keanu was out before Get Out but yeah, in life (not just in film) a lot of it is who you know, I've met people who I would have never guessed would be instrumental in my entrepreneurial life...so for me, it's both. It's who knows what but also, is it good. We don't know everyone's motivation for (including their kid in a film, etc must be nice to have your dad call up NBC head) but she was also really good in it. :-). That said, there are times i'm like "I want my hour and a half back"! Marketing helps everything. I write books --I stopped waiting for "proper" NY lit agents' to get their approval but there are days I go back to querying them because marketing is such a beast in itself. (not that there are any budget guarantees with that). I would recommend just making/producing what you can, make it good and do your best to get the word out! If you do this pattern often enough, I think the universe will call upon you to present. :-)

What do you ascertain from this chat message? Is he legitimate?

Alan Eddie I believe message that is visible only to you.

No, he blocked me so all his replies vanished, a scammer. He needs money before he talks to anyone. All his IMDB listings are fake, non-startup movies.

Here is the screenshot...he funds to any language and to any country, amateur scammer...lol 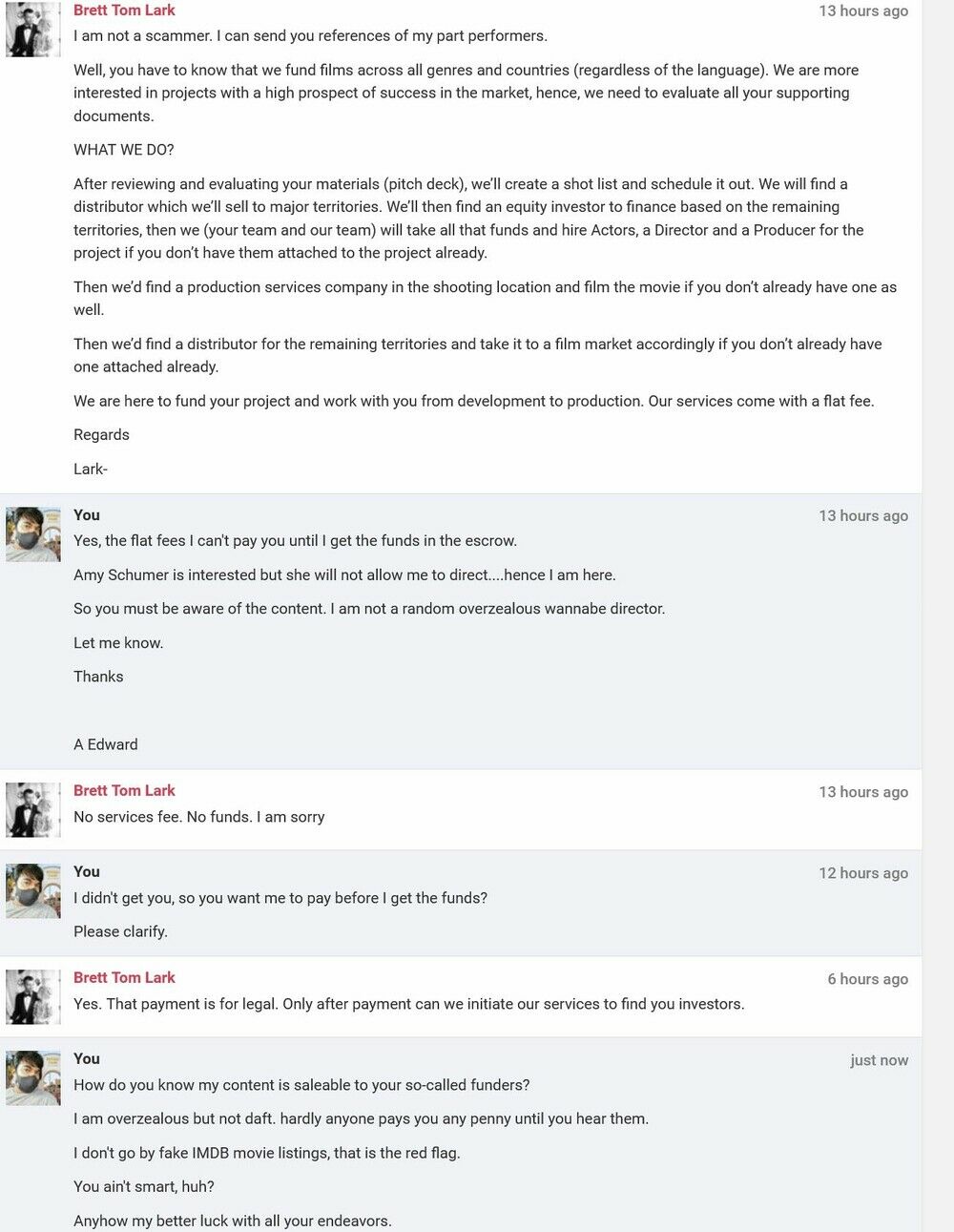 Alan Eddie Tom Lark - say no more. Anyone saying they can get money for your production BEFORE seeing it is prima-facie a scammer, and when they ask for cash prior to seeing it or telling you what they might do for that money, they have proven themselves as not legit.

Yes, Shadow Dragu-Mihai you are correct, that's, what I asked him. He blocked me. His IMDB listings are fake for the non-produced movies. Scammer.

Alan Eddie :D He tried to connect with me, under a slightly different profile name (guess he has been banned a few times). But someone had already warned me about the guy.

Oh, and lookie here, he also flogs scam cancer cures https://dev.thetruthaboutcancer.com/cancer-survivor-story-brett-lark/ I have long and deep cancer experience, and "The Truth About Cancer" is anything but.

Yes, Christiane Lange, but the net is so vast so gets more fish. 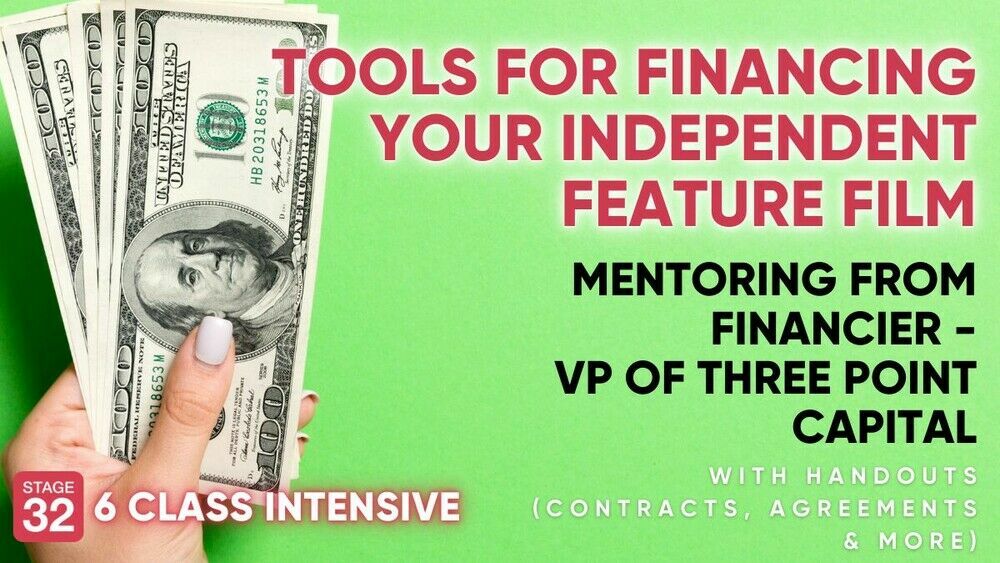