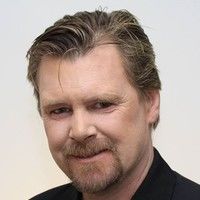 Brenton Foale
Works at Fantasm Productions ♦ Actor, Director, Screenwriter
posted in Introduce Yourself   Sign in to subscribe
5 years ago

Hello everybody, I have been acting professionally since 1987, so 28 years. I first started an interest in acting and filmmaking at the age of ten, in 1980, when I attended my first young filmmaker's weekend course with S.A.A.S.E. (South Australian Association of Screening Education). I was taught how to develop an idea for a short film, cast it, use props that were available at the time for the film, camera techniques, and editing. I made a five minute black and white, silent, film called "Help is on it's way" in 1980, on super 8 celluloid. I loved the course so much I went back in 1981, at age 11, and spent a whole week making my second short, called "The Runner". Again on super 8. In 1987 I landed my first professional role in a BBC/ABC co-production called "The Four minute Mile", where I played a journalist during the race to break the world record for running the mile. That film starred Michael York. In 1988 I created 'The Montage Filmmakers Group' to teach people the art of filmmaking. I ran this until 1996. I became a stage magician in 1991, and performed as 'The Black Fantasm', for which I won many awards. I still perform magic, just not as often as I'd like. I wrote a feature screenplay in 1992, (which has yet to be made into a film), but somewhere I still have that screenplay and may look at returning to it in the future, now that technology has advanced so much with computer graphics. In 2013 I wrote my second feature length screenplay, and am in pre-production with it at the moment. We have just run auditions last weekend to fill some of the lead roles, and we are planning on filming in early 2016. That film is called "DEAL". We are still scouting locations, and may end up filming in Queensland yet. I run a company called FANTASM PRODUCTIONS. I'd love to collaborate with other filmmakers and actors, so please add me up.