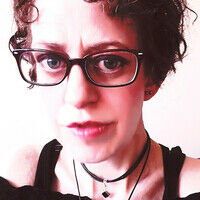 According to the big banner, it's introduce yourself weekend. I joined this site a few days ago, and introduced myself then. But I didn't say my goals and dreams. or my art/writing background. So I'm doing that now.

I have a background in multimedia. Worked as a computer graphic designer in publishing, advertising, and marketing. Though I'm new to screenwriter, many times I've found my background and work experience has helped a lot with learning screenwriting ropes. Write a logline? No problem! It's pretty much the same as writing promo copy for business ads.

With three short film spec scripts completed, I'm now working on feature length scripts. One horror and the other dark low fantasy. I like dark and weird. Mostly horror fantasy. That's just what I do.

My goals constantly change and evolve. Right now, as a new screenwriter, all I really want is for people to let me know if my scripts suck and/or if I'm on the right track. If I'm on the wrong track, I'd want to know that, too. I firmly believe there no such thing as negative feedback. There's useless online trolls who are impossible to reason with, but that's another story.

Hi Lily. Welcome! You certainly sound like you have the right attitude. This bodes well. I'm always keen to help those writers who truly want to help themselves. Feel free to stop by for a chat anytime.

Thank you! Having the right attitude is everything. I also have a dry sense of humor. It keeps me sane. :)

Thanks, Leonard! I often cross genres. I'm not one to adhere to only one genre. So, I just might write scripts that's crosses more into drama and comedy. I will definitely keep you in mind!

Good to meet you, Lily Blaze! Thank you for taking the Introduce Yourself Weekend Challenge!

While I'm not disabled anymore, I'm definitely here to support what Jenni Gold calls "cinemability." Thank you for not giving up on yourself or your craft!

Hi lily. If you want me to read anything I’m happy to. I have a masters in screenwriting from London college of communication, university of the arts London.

I’m very interested in horror as well. Though I prefer the creepy horror rather than the gore fest horror.

Also, just as an aside, I have a background in graphic design too.

Tennyson, thanks so much! It's never easy. but writing enables me so much. I'm going to keep going no matter what.

Hi Rebekah! Nice to meet a fellow graphic designer. I'm also more into creepy than gorefest. For me, atmosphere and the psychology are more of a writing challenge. Gore for the sake of gore, kinda bores me. The scripts I've finished so far, I've uploaded to my profile. It sounds like my short Sand Crystal might be more your thing.

Unfortunately, right now, I have a budget of zero. I signed up to the site without knowing there's a lot of paid services here. Good to know, and maybe in a couple of months I'll have a better budget.