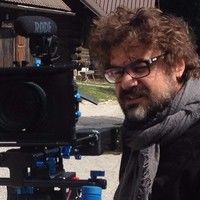 Luca Caserta
Works at Film Industry ♦ Director, Screenwriter, Filmmaker
posted in Introduce Yourself   Sign in to subscribe
3 years ago

Hi everybody on Stage32! I'm Luca, Italian director and filmmaker, based in Rome (Italy). I'm author of short films, documentaries, music videos and some other audiovisual stuff. My passion for Cinema is total: I'm really in love with all the filmmaking process. Beyond the money, the technique and the equipment, I believe its heart is artisan. The light, the camera, the troupe, the director, the actors and a story to tell: this is all we need to make the magic coming true. Nowadays the Cinema is still that "magic lanter" which can make the fiction come true.

I made a trilogy of short films, which I called "the trilogy about the double", that is about what's really hidden behind the daily masks and about the "monsters" that could lurk in the deepest part of the human soul. The trilogy includes "Dentro lo specchio - Inside the Mirror" (2011), "Dal profondo - Out of the Depths" (2014) and "L'altra faccia della luna - The Other Side of the Moon" (2016). All the movies have done well through national and international Film Festivals around the world. "Dal profondo - Out of the Depths" is officially distributed in the U.S. and worldwide by IndiePix Films and can be purchased on demand on its website (http://www.indiepixfilms.com/film/5940).

I'm also author of "La fabbrica della tela - The Canvas Forge" (2014), a documentary about the birth of a painting: the movie is focused on the artistic and artisan process under it. The protagonists are Simone Butturini, a painter from Verona (my hometown), his technique and his unique pictorial subjects (the water towers). In this movie I meant to let talk only the light, the images and the sounds produced by the raw materials and the creative process. So there are no words nor interviews.

I'm working now on some documentaries and I'm focusing on new projects to direct my first feature film. If you want to keep in touch with me, you can visit my official website (www.lucacaserta.com), where you'll find links to socials and video channels (as here on Stage32 as well). Have a nice day and... long live the Cinema!

Out of the Depths (Dal Profondo) (ON DEMAND)

http://www.indiepixfilms.com/film/5940
Out of the Depths (Dal Profondo) (2014). Elena and Andrea, a young married couple, arrive at their newly bought country house. A disturbing atmosphere pervades the old mansion upsetting her but bewitc…

Hi Luca! An interesting read and a nice reel, congrats on your success.

Thankyou so much, Vladislav!

Hi Christian, nice to meet you!