Introduce Yourself : My Story by Amy Austin 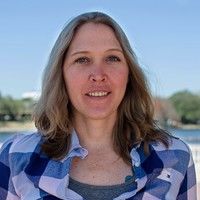 I just joined Stage 32 last weekend. I am in the process of changing careers from video games to film. My video game credits include being a UI artist on Tiger Woods PGA Tour 10 (XBOX 360 & PS3), NCAA Football 10 (XBOX 360 & PS3), Madden NFL 13 (XBOX 360 & PS3), and Maddne NFL 25 (XBOX 360 & PS3 and XBOX One & PS4). I have a degree in Digital Media from Full Sail that I received in 2001. I am ready to take on new and exciting challenges in the film industry. Thanks to my almost 5 years at EA Sports, I know what it is to work ridiculously long hours and still perform at your best, even when tired. I also have developed a tolerance for catered meals… I have always been a TV and movie buff. My interest in working in the industry piqued the first time the brachosaur appeared on screen in Jurassic Park. I originally enrolled at Full Sail for film, but a combination of Full Sail film graduates being black balled in the local industry, and being told that I could make a million dollars if I knew how to make a website (I was 20 and stupid), lured me to switch over to Digital Media. I never made a million dollars making a website. But I worked hard as a graphic designer and became good enough to get paid to make AAA video games. I watched many of my coworkers happy to be at work every day, we were making great things, it was exciting, but it wasn't doing it for me. While I enjoyed my time there, and wouldn't trade it for anything, I knew it wasn't my dream job. I am happiest when I'm not sitting in a cubicle, out filming things with my phone, or DSLR, or video camera. I was laid off fall last year (2013) and while interviewing for new jobs, I had an interviewer ask me about a 2 week gig I did last summer. I was a PA for a reality show that never got off the ground because the "star" landed himself in jail. He was (is, he's not dead just locked up) a wild boar trapper in the middle of nowhere Florida (just east of Bradenton/Sarasota). We shot in the middle of the night, I'm surprised nobody ever got West Nile or malaria with all the mosquitos we dealt with. We were chased by wild boars, the producer even got goared in the leg at one point. While I was recounting all this craziness and laughing about it, because it really was a great time, the interviewer looked me in the eye and said "I can tell you're really passionate about film and video." That's when it struck me. That's what I had always wanted to do. I need to do this. I am currently a freelance camera operator for ESPN at their Wide World of Sports complex at Walt Disney World while I attend my final year of intensives in film school here in Orlando. I am currently looking for local PA or volunteer / low or no pay gigs to gain more experience while I'm in school. After graduation next summer, I plan on relocating to the Pacific Northwest. Vancouver is where I have my sights set on, plans B and C are Portland and Seattle. Why? Because if film doesn't work out, I will have plenty of tech companies to fall back on in that area that I can work for as a multimedia designer. Ideally, I would like to work in network television. I obviously wouldn't mind working on features, even if it's just a day player roles. I don't necessarily want to direct, if I do, I would love to be the 1st woman to direct a summer blockbuster, but I'm not into getting that far ahead of myself at this point in my life. I wouldn't mind becoming a DP at some point. I know from my path to EA, that I will start from the ground up. I am confident in my ability to succeed, I am also humble enough to know that film school is far from where the learning stops. I will learn something new every day if my career lasts 5 years or if it lasts 50 years. I will work whatever jobs I can get, ensure I can take something away from each one of them, and bring that knowledge and experience to the next. I hope I can work with some great crews that will push me and make me better, as I have in my graphics design career. I will consider myself successful in this industry if I am respected by those who work with me, have people who want to work with me, and I can find regular work. If I never make it out of the grip or lighting department, if I'm never more than a 1st AC, I'll be okay with that as long as those three things are met and I am happy going to set and working most days.