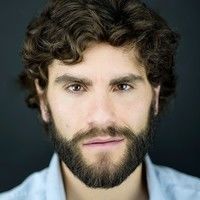 Hello everyone! I'm very much looking forward to making new acquaintances. and connections.

So here's a bit about me:

I am a classically trained London-based actor, currently looking for new representation. I trained at Drama Studio London and was selected to attend a workshop at the RSC where I met and worked with Hannah Miller and Cicely Berry.

I speak fluent French at a native standard and am also very proficient in Spanish.

I have a full year's training and

extensive experience in both armed and unarmed combat and particularly rapier and dagger.

Since graduating I have been involved in several theatre and film productions, highlights of which include: Aramis in a live event for the BBC's The Musketeers; Mademoiselle Julie at the Barbican starring Juliette Binoche; Sherlock Holmes in Sherlock Holmes at the Leicester Square Theatre and The King's Head Theatre; King Henry V and Duke of Lancaster in Phil Willmot's adaptation of Henry VI at The Union theatre; Peer Gynt in Ibsen's Peer Gynt at Riverside Studios; Charles Dickens, Pip, Sydney Carton, David Copperfield and many more in Happy Birthday Mr Dickens; Secret Cinema's The Battle of Algiers in The Old Vic Tunnels, the thrice extended run of The Shawshank Redemption, and also Secret Music Presents Laura Marling; Adam in the brand new stage musical: Love Beyond, also featuring in the transfer to Wembley Arena, Prince Cyril in Princess Ida at The Finborough.

My time at DSL also encompassed a full year's invaluable experience and training in screen acting with directors you will probably know personally such as David Tucker (Lark Rise To Candleford, Miss Marple, A Year in Provence), Jo Johnson (The Bill, Eastenders, Holby City), Baz Taylor (My Family, Midsomer Murders) and Laurence Moody (Coronation Street, Casualty) and have had extensive experience since.