Introduce Yourself : That time is here again! by Christopher Neal Fisher 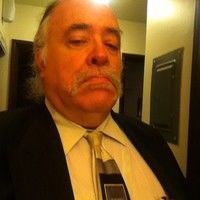 That time is here again!

Time to introduce ourselves, that is. :) So who am I? A retiree, married, no kids (two stepdaughters, though), homing in on 60, who’s hoping to have a “second career” doing what I really wanted to be doing all along but couldn’t, because I needed that safe, secure living a regular “job job” provided (sound familiar?). Oh, yes, and I’m also the creator of Bayou Noir. What is Bayou Noir, you ask? It’s an hour-long Southern Gothic Serial Drama, set in in and around a (fictional) town of the same name located somewhere in the heart of Louisiana’s “Cajun Country”. It’s kind of like Dark Shadows (original series) meets The Sopranos meets The Long Hot Summer. Its cast of characters (and the town itself could even be considered one of them) is varied and colorful, but the main protagonists are the members of the Delacroix family, whose ancestors founded the town some 300 years ago, when Louisiana belonged to the French. The Delacroix are rich, influential, powerful; they’re the “power behind the powers that be” in Bayou Noir, and nothing — legal or illegal — happens there without the say-so of the family’s patriarch, Jean-Baptiste “JB”. Of course, when you’re all those things, and you live in one of the most supernaturally-charged areas of America, you can’t help but have more than a few skeletons (and ghosts, vampires, werewolves, witch queens, zombies...) in your family’s closet. Currently I have a 66 page script for a pilot episode completed that’s been praised by more than one script coverage reviewer for its concept, dialogue, and characters, and am currently working on a pitch bible. It’s both my hope and intention to find in the coming year an independent producer of TV series for streaming platforms who shares my view that it would make a great vehicle for quality character-driven storytelling that’s both entertaining and engaging!

Hey Christopher Neal Fisher! Glad to have you here and I know a lot of people understand the need for the "day job" while working on the passion projects. Glad you're taking this time to really make the leap. Please let me know how I can be helpful in getting your work "out there" - I am the Director of Script Services at Stage 32 and hope to offer some useful insights. j.mirch@stage32.com is the fastest way to reach me!

Jason Mirch — Well, I’ve actually been on here for about two years now, but only just recently started posting abouit my project because I didn’t think it made much sense to until I had a product to offer that I felt was “ready”. As to trying to do the ol’ 40 hours and produce a decent, worthwhile TV concept, script, bible, etc., on top of it, some people can do it, and some can’t. I found out I’m one of the “cant’s”. Oh, I tried, believe me, but in trying to strike a work-life balance (and I consider screenwriting to be a combination of the two), there just wasn’t enough free time available to me to allow for the continuity of thought and productive efforts I need to have in order to produce something worthwhile. It was only after I retired (a matter I was not given a choice in by my former employer) that I found myself with the uninterrupted free tine to formulate story ideas, put them down on paper (or the digital equivalent thereof), revise them, etc. In any case, I thank you for your offer of assistance with publicizing my work —- I may well take you up on it! To be honest, screenwriting has been and continues to be a learning experience for me, which means that I frequently get to a point in things where I wind up stopping and saying “Okay, what do I do next?” I very strongly believe in what I’ve created, and feel that despite my being a “newbie”, its a quality product that only needs a producer who sees the same potential in it for entertaining and engaging storytelling and character development that I do.

Hi Christopher. Wishing you all the very best as you pursue your preferred career. Bravo on making this decision. Many don't manage to find the courage. If you ever want to talk about any aspect of the craft, by all means come and have a chat with me. Always happy to help.

Stephen Olson — I did what I was supposed to do because I was a responsible adult with a wife on disability, and also someone who liked the idea of a stable roof over my head and three squares a day to begin with. The job at best was boring (which I didn’t mind), and at worst boring yet one where you had to pay rapt attention to what you were doing in order not to screw it up (which I found I minded a great deal). And the people were “nice” by and large, but as a creative-type, I found I had little in common with them and vice-versa. My dear wife tried to encourage me to quit my job, cash out my pension, and devote myself full-time to writing. What she, like most non-creative types, did not understand was this business is for the most part not like a regular 9 to 5; it’s something of a crap shoot, so I bided my time until I could be free of that necessity. So now here I am, spending my days writing, and though I haven’t made a dime off of any of it yet, I still feel happier and more fulfilled doing it — even with all the challengers and disappointments that come along with it for most of us — than I ever felt at any “job job”.

Phil Clarke — Hello, and thank you! Tbh, though, I don’t know if it’s so much courage as it is that it’s the only thing deep down inside that I’ve ever really wanted to do. It’s really kind of a “to thine own self be true” thing I guess is another way to put it. And thank you for the offer —. I may well take you up on it!

Christopher Neal Fisher I totally get what you mean. And I'm sure many reading the above will identify too. Good luck on your writing journey, and don't hesitate to get in touch if you'd like to talk about anything writing-related. I'm always keen to help.

Have you ever thought about adapting your series into a screenplay or a very limited series? A bona-fide multi-seasonal broadcast or streaming series is the hardest thing for an unproduced writer to sell without influential connections, collaborators, partners or representation. Regardless, have at it. There is a certain satisfaction in finding your calling later than sooner.

Neal Howard — Tbh, I’m not really interested in doing it as a film. However, I should point out that my original concept for the series was as a Internet Soap Opera (Web Series), similar to, say, Ragged Isle, Venice: The Series, Anacostia, etc. This was because I figured it would be easier to get it made that way since: A. I’’m a “newbie”, and B, it is, admittedly, a somewhat different series concept from most of what’s out there,. The main reason I’ve been trying to sell it as a hour-long is because more than one script coverage service I submitted the original web series version pilot script to, as well as several people in the local screenwriters’ group I belong to, were taken enough by it to suggest that I try to sell it that way instead of as a web series. The current hour pilot is basically the original pilot plus two subsequent episode scripts plus additional linking material to make it flow more smoothly in that format, so it wouldn’t be all that difficult to “break up” it up back into those original episodes. I’m not giving up just yet on trying to sell it as an hour long, but if I feel I’ve exhausted every reasonable avenue to get it made that way, returning to the the original plan is certainly an option in my mind. Either way, I believe in my series as a viable entertainment concept that I have no intention of giving up on getting it made, by any means necessary (well, without compromising the integrity of it, of course).