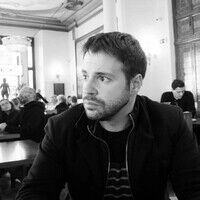 Let me introduce you to the "Audiotales" webseries/short films.

Each episode is different and the themes vary from horror to scifi and others, but mostly horror (lovecraftian and other types) like this one.

Keep in mind that, as the title of the series suggests, it mostly focuses in the Audio/Music performance and the Story, although there is some animation and video editing.

This is a new episode, it actually premiered yesterday and both episodes 1 and 2 are horror themed as well. I invite you to watch those as well.

Synopsis: "David was but a teenager when it happened. Like so many others his age, he went to school, had his first job and the occasional romance. And like them, he too discovered the gruesome truths that lurk just beyond sight, deep in the woods, in the shadows of the world, always near. Sooner or later, they will come for us all. Will you dare?"