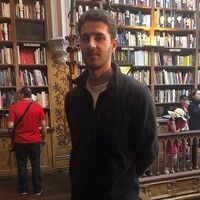 My name's Joel Ebstein and I'm a 26 year old screenwriter based in Los Angeles.and San Francisco. I have a comedy, romance feature titled "Chameleons" available to be read by anyone who requests. It's an original, and unconventional "love story" about a couple who don't actually love another, or even like one another...They hate each other, okay? It's a satire on modern marriages in today's America. It takes place in the world of Hollywood, and you're guaranteed a laugh, or two.

Logline: The romantic relationship between an up-and-coming actor and film producer goes horribly awry when they manipulate each other to advance their careers and personal lives.

We open on DONOVAN LEARY, (20s), our protagonist, as a prisoner picking up trash on the side of a desert highway. The inmate who picks up the most trash gets a reward. Donovan manipulates REDNECK INMATE into handing over a large piece of trash. Donovan later manipulates Redneck Inmate into smuggling nails into the prison for him. We cut to JACKIE LEVINSON, (40s), our other protagonist, as a prisoner in a prison conference room. Jackie pleads to two PRISON OFFICIALS for her own prison cell. Jackie lies and manipulates, successfully getting her way.

Cutting to six months earlier, Jackie and Donovan attend a lavish Hollywood party. Jackie and Donovan, both outspoken and arrogant, lead separate group conversations. Donovan, an up-and-coming actor, tells his friends that he’s looking to secure financing for his next project. Jackie, looking to date an actor, learns from a friend that Donovan is an up-and-coming talent. Jackie and Donovan turn on their charm, flirt with one another, and have sex in a bedroom. At the end of the night, Donovan and Jackie stumble down the block, drunk. Jackie sees TMZ photographers up ahead, who were staking out the party for movie stars. Jackie turns around to find Donovan’s last director, SANTIAGO LUNEZ, (30s), behind them. Jackie “accidently” swings a liquor bottle in her hand, smacking Santiago Lunez in the face. This leads to a fight between Donovan and Santiago Lunez, and Donovan knocks out Santiago Lunez. TMZ captures the whole hysteria.

The next day, Donovan meets with his film agent GENE, (60s), who informs Donovan that the single investor signed on to finance his project has dropped out, after learning about Donovan’s fiasco outside the party. Donovan tells Gene that he has a lead on another big time investor, Jackie. Donovan and Jackie go on a date and fake affection for another. Donovan asks Jackie to read his script to see if she’ll produce and finance the project. Jackie loves the script, and wants to finance half of it, as well as produce. Jackie has one condition, though—she gets to play a supporting role in the film, the character of Francesca. Donovan is hesitant, but agrees.

Later that day, Jackie tells Donovan that she loves him out of nowhere. It comes off odd, and Donovan is surprised. However, Donovan returns the sentiment, telling Jackie that he loves her back. The two fight over who loved the other first. The next day, Jackie and Donovan meet with INVESTORS to pitch their film. BRIAN, (40s), Jackie’s producing partner, is among the guests, along with LUDWIG, (30s), a Danish man who is the director of Donovan’s project. Jackie woos over the Investors by lying about her connections to China, the Investor’s home country. The Investors agree to finance the film.

In act two, Donovan speaks to Ludwig, the director, and secures Jackie an acting audition. Jackie unexpectedly nails her audition, and gets the role to Donovan’s secret dismay. At the audition, Donovan meets Jackie’s past boyfriend, PETER, (20s). In a secret conversation, Peter reveals to Donovan that Jackie only dated Peter to milk fame out of him. When Jackie realized Peter’s acting career wasn’t taking off, she destroyed his career and Peter hasn’t worked since. Peter suggests that Jackie is manipulating Donovan, too. Donovan has a realization that Jackie instigated the dispute with Santiago Lunez outside the party, so that Jackie would be the only one willing to finance Donovan’s film, giving Jackie complete control over him. Donovan also learns from Peter that Jackie hates sentimentality with a burning passion; flowers, poems, “I love you’s”, etc.

At the end of a table read for the film, Jackie and Donovan head for an elevator when they’re stopped by DIANE, (30s), the casting director. Diane has her new BABY in her arms. Donovan and Jackie fake emotion around the Baby, and it’s obvious to everyone around. Later, Donovan hints to Jackie that he knows that she doesn’t feel much emotion. Jackie denies the accusation. Donovan admits that he doesn’t feel much emotion either, besides rage, envy, and jealousy. Donovan gets Jackie to admit that she felt dead inside when holding the Baby, and that she doesn’t feel much emotion. Jackie pauses, then remembers to throw in that she feels love toward Donovan. Donovan, caught off guard, says that he loves Jackie too, and just forgot to mention it. It’s an obvious lie because Donovan just said he “seldom feels”.

Jackie uses her manipulation and begs Donovan to ask Ludwig, the director, about expanding Jackie’s role. Donovan agrees that he will ask Ludwig. However, Donovan impersonates Ludwig, and gets Jackie to believe she’s been fired off the film. Jackie is devastated. Donovan vows to Jackie that he will get her role back. Donovan proposes that if he can re-secure her role, he might have proven his worth to be Jackie’s husband. Jackie agrees to marriage, but only if Donovan gets her role back. Later, Donovan excitedly tells Jackie that he re-secured her role. Jackie is elated, until Donovan reminds her that now they’re getting married. Donovan proposes they get married that night. Jackie agrees, but subtly hints that she’s marrying as soon as possible just to get the whole thing out of the way.

The outside ceremony is a disaster. Jackie is shit-faced out of her mind because she’s faking her love for Donovan, and it’s the last thing she wants to do. Jackie vomits all over the place. At the end of the ceremony, Jackie bolts down the hill in her wedding dress, tripping and tumbling all the way to the bottom. She’s knocked out cold.

Jackie wakes up in her mansion the next morning, not remembering a thing. Jackie makes passive aggressive passes at Donovan and “accidentally” burns their Marriage Certificate to shreds. Jackie goes to her car to unexpectedly find a “Just Married!” banner on its backside. She lividly tears it to pieces when Donovan’s not looking. Donovan calls the bank, and asks about opening a joint bank account with his new wife.

Jackie and Donovan act in the movie on the first day on set. The two are very passive aggressive to one another, and secretly sabotage one another’s performance. The shooting scene ends in a boxing ring where Jackie’s character spars with Donovan’s character. The playfully sparing turns into a real life aggressive fight. That night, Ludwig sits Donovan and Jackie down, and tells them that their tension and animosity while filming will be palpable on screen. Ludwig informs Jackie and her producing partner, Brian, that they should search for replacement actors for the two, just in case things continue to spiral downward.

Jackie invites Ludwig to her birthday dinner. Jackie, Donovan, and Ludwig attend the celebration at an opulent restaurant. Donovan and Jackie both “hit on” Ludwig throughout the evening. Donovan and Jackie are doing whatever it takes to win Ludwig over, so that they won’t get fired off the film. Donovan is a straight man pretending to be bi-sexual. Ludwig denies both of their sexual advances.

Jackie is fed up with Donovan and his deceit. She buys a pistol. Donovan is fed up with Jackie’s manipulation as well. That night, Donovan makes an overly-romantic meal for the two of them in Jackie’s mansion. Jackie, secretly despising sentimentality, can’t hold in her hatred for Donovan any longer. She explodes and destroys the meal. She admits that she never loved Donovan. Just what Donovan wanted her to admit. Jackie tells Donovan to leave her house for good. Donovan denies the request, and says since the two are married, he has every right to be there. Donovan doesn’t leave.

The next day, Jackie and Donovan are on set shooting more scenes. Donovan slips bath salts into Jackie’s coffee. Soon afterward, Jackie switches out a prop gun on set for a very real pistol that she will be using throughout scene. As filming gets underway, the effects of the bath salts kick in. Jackie becomes aggressive, belligerent, paranoid, and staggers around. Jackie has a full-out meltdown on set. She soon realizes that Donovan drugged her. Jackie grabs the real pistol off a table, and shoots at Donovan. Donovan is clipped by a bullet in the shoulder. Jackie is apprehended by crew members and police arrive. Ludwig tells Donovan and Jackie that they are both fired.

Ludwig runs away. Donovan and Jackie chase after him. Ludwig is hit by a car and killed. Jackie’s “heartbroken” at the thought of having to audition for her role all over again. Donovan and Jackie hide in a motel room down the road. Jackie asks Donovan to sign her divorce papers. Donovan refuses. Jackie tortures Donovan with kitchenware until Donovan finally signs the papers. Donovan and Jackie blame one another for their situation, and rub toothpaste, shaving cream, lipstick all over each other’s faces like madmen. Afterward, the two drop to the ground, cackling, rolling around in psychotic laughter. The two confess that they feel weird sensations in their chests, “feelings” that they have no idea how to describe. It’s the first time that the sociopaths have felt something real---affection. The police barge into the room moments later, as Jackie crawls across the floor to tear up her divorce papers.

We cut to black, and pick up in prison months later. Donovan picks up trash along a highway, and Jackie rides in the back of a prison bus. Jackie is being transferred to a new prison. Through voiceover, we learn that Jackie’s prison bus has a chance to pass by the same highway that Donovan is working on. Donovan vows to stop the bus to see Jackie. Donovan lays nails across the driving lane of the highway when he spots Jackie’s prison bus approaching. The bus wildly crashes into the side of the road. Jackie breaks the bus window. Donovan and Jackie meet face to face again. Donovan asks Jackie if she wants to renew their vows, since the first time Donovan coerced her. Jackie agrees, as the Correctional Officer gives Donovan a beating.