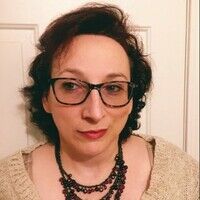 Cheryl Allen
Works at the 502 Revue ♦ Editor, Host/Presenter, Screenwriter, Voice Artist
posted in Screenwriting   Sign in to subscribe
3 weeks ago

Settle a "discussion" for me. I'm not writing a spec script but I am writing a script wherein a character sits on her door step and is reading a letter. It isn't necessary that I have OS voiceover or anything like that but the audience needs to at least get enough of an idea about what the letter contains. How would you present that in a script?

SUPER. (what the letter says)

I have a similar issue. So I used an illiterate character. A person quickly summarised it for them.

We need more context. What's happening in this person's life right now? What's happened up to this point in time? Who's the letter from? What are some of the options that could be in the letter? Once you answer these questions then an appropriate expression from the character reading the letter will tell the viewer everything they need to know.

You could maybe repurpose a montage sequence for this:

The words of the letter (Italicized for emphasis, if necessary)

That's assuming the letter is so long it won't make sense as dialogue.

I like Rosalind's suggestion of using SUPER with the texts on the screen, as well.

You could use INSERT. Or you could simply use secondary headers, somewhat similar to what Nadia shows above. However, if a character is reading something out loud then that text would be in dialogue form not in insert form. Nadia’s example could be fixed by indicating the letter is being read silently by the character and the audience as the letter's text is shown close up on screen for the audience to see, "an insert." No all caps for the character name in the description if this character has already been seen on screen—for example, Jane rips open the envelope, unfolds the letter. Words scrawled in calligraphy: "Blah blah blah." After the colon, the letter’s text would be within quotation marks, and it’s fine but no need for END LETTER. You could just follow with the character name as a secondary header to indicate the shot then moves from the letter back to the character. Or if the text of the letter is short then you could just keep it within description without secondary headers or a formal looking insert. But most important, do not repeat information. Do not be redundant. Do not have a character read it out loud in dialogue and then also include an insert in the script. Do keep it simple and clear, and present it in an entertaining manner so that the eye flows over it easily. Do not throw your reader out of the story. ;) Hope that helps!

Warren opens the envelope from the orphanage, and takes out the letter. CUT BACK AND FORTH between the letter and Warren.

of the Order of the Sisters of the Sacred Heart."

Keep the contents in quotes - or any time characters are reading something out loud or to themselves from another source. I would use V.O., and not O.S., because the character (Sister Nadine) is not physically in the scene.

You could do this a few ways:

2) Have another character ask about the letter

4) Have the character mouth the words, then show blips of the key words in the show up on the screen (for instance, if its a 'Dear John' letter, show the words 'leaving you' 'divorce' 'another lover' etc.)

5) Have the letter be in another language, and the character uses Translate on their phone to figure out what it says

Feel free to play with it, see what you like best. Good luck with whatever you decide!!!

Depends on what we need to know from the letter. Reading on screen is clunky. We just need to know who it's from, we can get the idea of the contents from the actor's reaction. Does she make funny faces? Look of shock? Balls it up and tosses it? Burns it? Uses it to curb her dog? Does she smile and cry? If a movie is done well, you can turn the volume off and still know what's happening.

Facial Expression plays a critical role in a character's reaction to reading a letter or script. Having written countless letters and received them, the words on the page illicit a response. If the letter contains a sad subject matter, tears will start to fall from the eyes. If the content of the correspondence is a happy or joyous topic, the actor may start to smile or laugh jubilantly, this reaction will allow the audience to imagine what the subject of the letter might be.

Basically this is a series of bills she isn't expecting for some truly BS reasons. It isn't necessary to have long drawn out snippets of dialogue internal or otherwise or a lot of awkward screen silence since it won't take long to establish what's going on, and my character will definitely be having the kind of reactions you'd expect under the circumstances.

Oh, and THANK you by the way for weighing in. You all get good human awards.

[you provide a little detail about the letter]

This is probably the most industry "standard" way of doing it. How long you linger on the letter (i.e., how long the audience gets to read the words) will be decided during editing.

Just to share further information... Here's the format for INSERT (known as a CUTAWAY in some shooting scripts) that I was taught by my former mentor (former V.P. of Development at United Artists), the first example, and also as shown in The Screenwriter's Bible by David Trottier, the second example:

Brooke returns to her task, pulls out some paperwork.

Looks it over. Not bad.

No need for END INSERT. BACK TO works fine if you wish or you can go right to a line of action to indicate the shot moves back to the character or the scene, or you can use another secondary header (as mentioned earlier in the thread). Keep it simple.

INSERT should really only be used when it is important to draw special attention to an item you wish to highlight for some relevant story or plot or character reason, typically an INSERT may be a book segment, a news headline, a sign, a contract, a bill, letter, or note, etc.

Shortened example from The Screenwriter's Bible:

As Sylvester steps into the limo, the chauffeur hands him a letter.

Sylvester tears the letter open as the door slams shut.

INSERT - THE LETTER, which reads:

BACK IN THE LIMO

Of course, it's helpful to hunt down scripts from various films to see how others handled such things on the page— as mentioned above there are other styles, approaches, or ways to indicate a cutaway, depending on the context. But the two examples above are of the more "formal" look of an INSERT.

Depends where scene is at in story.

Mystery or definitive action by character reaction can be telling but that may be tough to execute depending if you do or do not want the letter to resolve, cause inspirational/problematic arcs or just move along matters too.

Then again if we really know or care/not care about your character its probably doable with some clever thought.

This helps SO much. I'm definitely thinking "INSERT" is the way to go here!

Voice over. What percentage of the audience is illiterate? What happens when the film is shown where English isn't the language - a USA film earns 60%-70% of its income from outside the USA. They can't read that letter. Of course, it's better not to have a letter. It's second hand info and not dramatic. Face to face can have tension and drama and conversation.

Subtitles. I watch a lot of foreign series and films, Korean more recently, and any inserts or any text shown on screen is subtitled. Everything, including V.O. is subtitled. Most inserts are of a very short amount of text/language. Works great. Does not take away from my enjoyment nor the story. Especially as it is part of a scene and is informed and shown within the context of the characters, their reactions, what’s happening, etc. It all works together. ;)

Best wishes with your project, Cheryl!