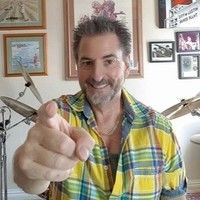 I've done the math and in my opinion, the more material you write, the greater chance you have of success. I've written 36 screenplays and teleplays and some are better than others. Nevertheless, I've pitched most of my work at one time or another.

Several years ago, a producer I know was looking for a historically based story for the History Channel. My wife suggested writing something about African American baseball during the early 1930's. I did some research and created a baseball/gangster called story called The Other League based on real Pittsburgh Crawfords team owner, Gus Greenlee. Though History Channel passed on our pitch, the VP at Tyler Perry Studios read and loved the script. He elevated it to the studio President, who read and ultimately turned down the project. Though there was no sale, having TPS read the screenplay was pretty dang cool, especially with both the top execs involved. Since then, I've done very little with this screenplay because it's a pricey period piece.

Last week, I pitched my Angela Davis script to a producer looking for historical stories for female African American leads but also mentioned the The Other League at the end of my email. Yesterday, the producer sent me a note saying Send me the epic gangster script about African American baseball.

You may write something and not do anything with it for several years. However, opportunities can present themselves at the most unexpected times. So in my opinion, writing more material creates more opportunities.

What has your experience been?

Cheers to you Phillip! I'm in a weird place of just starting out and getting positive messages in odd places while waiting on too many decisions to count and that I don't want to count. 36 screenplays WOW that's amazing seriously!

Thanks. I've slowed down on new material quite a bit this year but have spent time polishing some of my older scripts.

Exactly that. Once you start building relationships people will want more from you.

In the early days the more you have the better off you are. Even if it is an opportunity for more writing practice.

Tamara Kotevska, co-director and co-writer of Honeyland has only one short film credited before this doc. (she made by participating on a same contest with me ;) and she's now Oscar nominated movie-maker and probably made history forever by having one film nominated in both Best Foreign Film and Best Documentary Feature in all of the Academy Awards history!...So, my point is sometimes it's just "god damned "luck!!! :)))...Nevertheless for all of us mortals, yes I guess it better to have more to offer and you're stack Phillip is quite impressive. Just hope I'll be able to come close to that quantity :)

Kiril Maksimoski I don’t want to sound hard. A lottery is luck. She has talent. If it was luck, we would have an annual draw for the best picture, not votes from fellow filmmakers.

Craig, you don't and yes, of course she has to had a talent as well as the whole crew to pull out such a successful film. But still...there's experience to go with it too, you can put all this success into talent having only one short film behind without a little help from the luck along the way. We have a native proverb here, I cannot translate it literally but it goes something like: "sometimes jigsaw puzzle parts need to simply self-adjust"...I hope it makes sense :)

Phillip "Le Raconteur" Hardy I'll second what CJ Walley asked: what's your process for pitching? Cold queries? Asking friends for intros to producers they know? Only to producers you've gotten to know? We want the deets!

I thought waiting to develop a portfolio was best. I have five scripts now over six years. I’m going back and tweaking them starting with script one - looking at it I don’t know if was the best strategy. As you continue to write, read and study, you get better. My first script is awful compared by the standards I have now. (And it came in the top 20% in Nichols - shows contest are all in the readers you get) I’m completely rewriting this and all the others now. Sending them out one script at a time only.

John Ellis: My process includes cold queries that recently netted me a script request from Red Productions in the UK, which has put out some great BBC type shows like Happy Valley. I also received a read request from a Canadian television outfit. I have worked with several producers, including Sean Hoeslli (Palm Swings, Sin City) https://www.codebluepictures.com/unconventional-warfare

and Steven Roeder Lies My Mother Told Me who has recently put my work in front of Shondaland, Millennium, Paramount, Blumhouse, and many others. This year alone, I have 3 script reads from Shondaland, Odd Ball Entertainment, Touch-Feely Films, Solstice Studios, Warner Brothers, Steve Ecclesine, and several others. I recently signed a shopping deal with De Pass Jones for a television project because of a music producer who called me out of the blue after reading a press release. He happened to be the next door neighbor of the subject of a pilot show I wrote. He got the work into De Pass Jones, who presented our show concept to Martin Scorsese.

Steven Roeder has also put work in front of History and Lifetime Channel, William Morris, Jay Roach and Tyler Perry (3 times). I've had 10 option and and right to shop deals, mostly because of working with Inktip, I've also received some ghost writer worker from Craigslist, which connected me with one of the stars of ABC's Blackish. Stage 32 Happy Writers has put scripts in front of Ridley Scott Productions, Panay Films, Nightshade, Ravenswood Films and a few others. I've also used International Screenwriters, which has connected me with a few people. I've had script requests from Eclectic Films, Zero Gravity (several times) and that's just the stuff I remember. So as far as getting work in front of people, I consider myself fairly successful.

As far as debating the merits of having lot's of material, that's a choice the writer needs to decide.

WGA did a survey once, and the average professional screenwriter wrote 9 screenplays before making any money. So you need to plan on writing at least 9 screenplays before anything happens... and since that's an average and someone somewhere probably sold their first script (though that's hard to imagine), you might be the one who has to write close to 20 screenplays to make up for that person.

So expect to write a bunch of screenplays before you sell one.

I think people need to define “sale, “assignment” or even “Industry.” Everyone has their own financial and career goals.

But Spike Lee says to his NYU students wanting this life as a FT occupation, “Writers write.”

CJ: I'm not trying to prove a specific math theory. I more interested in stimulating discussions about writing scripts in nearly every genre. I'm strictly providing an opinion (clearly stated in the first line of my post) that having a lot of material available to pitch has afforded me more opportunities. And for the person that sells a script or gets optioned or shopped after six scripts, well done.

Dan: I agree with Spike and I've been inspired to write a lot of material. This year has been my worst for new screenplays since I began. Of course bypass surgery with months of recovery slowed me down a bit. However, this has been one of my best years for polishing work. I'm working on a new script but keep getting side tracked. I've also spent time developing pitch decks to help my colleague market a few optioned screenplays. I also worked on two show bibles. I see writers pushing the same script for several years and that doesn't work for me.

I agree with you 100%. Selling screenplays requires patience and constant vigilance.

No worries: I'm turning phrases like rotisserie chickens. You should see the big Air Fryer in my kitchen. Magnificent!

Phillip: Very prolific. I'm too slow to do what you're doing.

Ubiquitous, if this is the job you want, I wish you many more failures 'cause failure means you're in the game for real. Keep swinging.

Dan MaxXx: Thanks for being a true writing buddy, we've had some fun over the years and will continue to do so. I'm going until the wheels fall off.

Dan MaxXx :))))...best thing I see M. Night Shyamalan's tweet be like "just completed my new spec...." Sometimes 'feel like Jim Carrey in that last "cancer cure" scene of the Man on the Moon...