Anything Goes : Most Compelling Film Assassins by Bill Costantini 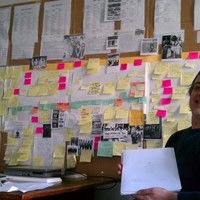 2,063 years ago, Roman Emperor and calendar inventor Julius Caesar was having his evening wine, thinking, "tomorrow's gonna be a great day - I'm Dictator-for-Life.  What could go wrong?"

Little did he know.  Beware the Ides of March!

My favorite screenplay assassin is John Wick (Keanu Reeves) from the John Wick films.  Anybody who'll wipe out hundreds of bad guys because of his love for a dog is okay in my book.  John Wick is closely followed by Lorraine Broughton (Charlize Theron) from Atomic Blonde - not just because, well, it's Charlize Theron, but because she did it for democracy, and could kick, punch, choke, break necks, stab, shoot and hurl objects with the best of them.  Tied for third would be Leon (Jean Reno) from The Professional, and Beatrix Kiddo, AKA The Bride (Uma Thurman) from the Kill Bill films.

That's a quartet of assassins that would make any screenwriter proud and any film patron happy.  Who are your favorite film assassins/him men or hit women?

Road to Perdition - Tom Hanks is a boss with a Tommy gun.

La femme Nikita - Luc Besson’s original film. She is the reason I want to be a filmmaker...and if I fail at that, a government reclute killer :)

I gotta say, Atomic Blonde is a wicked film - I love Charlize Theron. I've always wanted a Black Widow film from Marvel, but alas, they give me Captain Marvel. Scarlett Johansson has always been up there. Samuel L Jackson does well as the Hitman in The Hitman's Bodyguard if that counts.

One I've watched recently is Close with Noomi Rapace as the lead. Netflix did well with that one. I don't care too much for the whiney teen or the plot but there's some good fight scenes in there.

Steve Buscemi, Mr. Shh, in "Things to Do in Denver When You're Dead."

John Malkovich's assassin In the Line of Fire still creeps me out whenever I think of that film.

Munich - they're not the coolest assassins but I love the film.

Agree with @Owen For giving Jules W a mention. (Pulp Fiction). Furthermore the character’s most powerful move was deciding NOT to strike anymore. Vincent, Jules side kick, got killed not realising he had to change. My thought is Antagonists do not have to have a weapon in their hand to kill or do long term damage, Eg Nurse Ratchet One Flew Over Cuckoos Nest, Mother in Mother’s Day. Even dating back to Shakespeare we had Lady Macbeth etc. Often servants pick up tools, but the real assassin is The Puppeteer.

The massacre scene in Godfather. “Do you renounce Satan and all his works?” “I do”. Then massacre. Michael went to a privileged and private school, but Assassin was in his DNA. (Godfather).

@Bill You like assassin cos of his love for his dog? AND mention Julius same thread? Heh heh.......Your cat will kill definitely you! LOL Bill has pet called Julius!

Charles Bronson in the original “Mechcanic”

Yeah You're right @Craig AND "Bronnie" was Ace in all the Vigilante films.

Why do you love making these, matter of fact statments, Eric?

It's a pity Ruby robbed everyone of a chance of revealing the truth, and at the same time started the conspiracy industry.

So are you saying that "patsy" LHO was totally innocent or part of the conspiracy?

It isn't for this thread, I agree, but can you answers a simple question.

Of course everyone is entitled to their own opinion, but minimal study of the events would make this belief unlikely

It's a fascinating period in history though, for which I did spend time researching on an archive website. I think after 56 years and having no one put together a narrative to rival the Warren report, I can accept that LHO acted alone.

Anyway, back to the thread.

At one time a firm believer in a conspiracy, this lengthy book changed my mind, "Reclaiming History: The Assassination of President John F. Kennedy" by Vincent Bugliosi. Oswald acted alone.

Yeah, Bugliosi's book is incredibly detailed. Case Closed by Gerald Posner is also good. Not only do they debunk all the theories, they also show where the sparks of the conspiracy started and turned into a wildfire.

Here's a little true story about the assassination that may not be publicly known. I was in a bar in Tyler, Texas and somehow struck up a conversation with a pair of men who were identical twins. They recognized from my accent that I was not a native Texan and after I'd shared that I'd grown up in Massachusetts, they shared that their father (I forget his name) was that tall guy in the white stetson from that famous photo, you know, the one who'd been escorting Oswald when Jack Ruby shot him. Their father had been in charge of Oswald's security, and when Oswald got shot he'd been certain it had to have been a cop who'd pulled the trigger, so sure he'd been of his own security measures.

He must have held that thought for about a minute then? They jumped on Ruby seconds later.

Yeah, not for long. Ruby was a police hound and all the cops knew him, which was likely the only reason he had access to the basement of the jail where he shot Oswald. Of course there are conspiracy theories involving Dallas PD too ...

Actually, it was Bigfoot on the grassy knoll using a blunderbuss he swiped from Ichabod Crane. The second team was an alien who stepped through an inter-dimensional portal along with Captain Kirk who had Scotty beam him down. Kirk, with Spock's help, modified a phaser to make the kill setting look like a bullet strike.

lol!! It's funny how you criticise a 12 year old book (without even reading it), then use consiracy "facts" that had already been completely debunked before it was written!

Don't let the door hit you in the grassy knoll on the way out.

Jesus was in Dallas that day. Spotter for the the sixth team hovering over Dealey in a UFO..

What? So Neil Armstrong wasn't the First Man to walk on the Moon?

No! Kubrick was hired to fake it.

It's a well known, wackadoodle conspiracy theory that inspired a film.

Erik, if you believe that LHO was NOT one of the shooters, then explain what his role in the conspiracy was.

Sorry, Erik, but it is beyond stupid to even suggest that LHO was completely innocent in this. I'm done, as I'm pretty sure you're trolling.

Oh, but we're learning so much.

A personal favourite "Joker" Some feel he is more than, or equal to, Batman on many levels. Tenacity for survival, against all odds including a violent father, his opponent being a rich kid given everything at birth. Joker has also cleared the city of crooks for many years, before batman donned the cloak and became a vigilante God. The Agent of Chaos, kills those he loathes, but so does the squeaky clean kid. Interestingly, the huge advertising campaign surrounding most popular Batman film ever (before death Heath Ledger) was mainly about Joker. Major parks in USA had face painting groups, and mobile phones were left in cinemas, for participants to pick up and be given cryptic clues from Joker. I love all his quotes and have empathy for this guy! "What doesn't kill you, simply makes you stronger." JOKER'S LOGLINE FROM DARK KNIGHT. "A Merry Prankster rids a city of its hypocrites and liars as he gets closer to defeating the masked man who threatens to ruin all of the fun."

The making of The Dark Knight. Nolan didn't plan on directing a sequel. Creating "The Joker" character was a team effort, from actor to make-up/costume crew.

@Dan Thanks for share. LOL Loved the bit where Chris Nolan told establishment, might do another but in four years!

JOKER …...An assassin with principles. "EVERYTHING BURNS" He doesn't kill for money.

(Not to forget Assassins in Retro film, and 60s/70s.) My favourite in the whole of this time zone is the Gangster Thriller, Get Carter made in 1971. This original gritty and brutal British crime feature is now a Cult Classic. Mike Hodges first at directing a feature, a real life feel due to his documentary background and extensive research into the criminal underworld. A mind blowing cast of actors, and unforgettable soundtrack, playing as Michael Caine sits on the train from London up to Newcastle. The film had an intensely personal edge, as Assassin Jack leaves his patch in London, to find the cause of his brothers death. Hundreds of real life locals in Newcastle acted as extras, reflecting the rich social tapestry of the time.