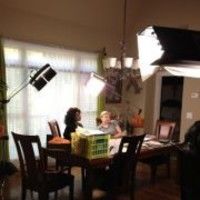 Darkness To Light Films produces the show , has two projects planned for the short term--the production of a television show called “Living True and Truly Living: Real People…Real Stories…Real Issues™”. Tahiera Monique Brown serves as Executive Producer, and is also the host of the show. This project was inspired by the upcoming book of the same name, and will be released by Tavine'ra Publishing in 2013. Darkness To Light Films is also in development on the movie version Tahiera's book Annihilator of Innocence, also published by Tavine'ra Publishing.