A traveling prostitute and an amnesiac runaway meet at a road stop and embark on a road trip that prompts them to address their past traumas. 2019's Carolina Film Association Best Picture, Best Direct... 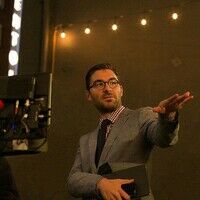 From director James Kicklighter ("Desires of the Heart," "Digital Edition"), Angel of Anywhere is the story of an empathetic stripper plays therapist to the many damaged clientele and co-workers who frequent the popular Anywhere Bar. Angel of Anywhere stars Briana Evigan (“Step Up Movie 2: The Streets,” “Sorority Row”) as Michelle, Ser’Darius Blain (“When The Game Stands Tall,” “Jumanji: Welcome to the Jungle”) as Brian, David A. Gregory (“One Life to Live,” “The Good Fight”) as D.C., and introduces Axel Roldos as Angel. "There is a daring to the craft that does not let the central themes do all of the heavy lifting. Instead, the aesthetic and mise en scéne are just as integral to the movie's power as the characters and dialogue. This can be seen in the wonderfully atmospheric backroom where the key scenes take place, with its cold blue light and sparseness, and Angel filling the room with his almost naked body. This expertly suited the emotional vulnerability of the characters who entered." ukfilmreview.co.uk/single-post/2017/09/04/Angel-of-Anywhere-short-film "It’s important to pay attention to these details in James Kicklighter's movie, written by Kate Murdoch and Casey Nelson, as nothing is not connected, every action tied to the next and ultimately to a twist ending. Things might seem superfluous and have potential to be disregarded as filler, but that is missing the larger point of who and what Angel is and what the end reveals about his fate. It’s smart and it’s challenging. Any film that forces questions like this are worth a closer look." ★★★★ thatmomentin.com/2017/09/07/angel-anywhere-2017-short-film-review/ "Though the short is only about 15 minutes long, it’s a perfect example of concept, structure, and execution. Kicklighter’s camera makes wonderful use of the loud and colorful club setting, particularly in an opening shot of Angel making his way through the back of the club, following him from behind until he makes his way out on stage, swinging around to see his chiseled face eclipse the burning lights behind him. The writing is strong and realistic, feeling like conversations that have happened in every strip club across the country on any given night of the week and the actors bring a surprising amount of depth to them." crushedcelluloid.com/reviews/shorts-angel-anywhere-2017 "I was impressed by all the performances. Axel Roldos is well-cast as the likable Angel. Briana Evigan, who also starred in a couple of Step Up Movie films, as well as Sorority Row and as Sonja in the From Dusk Till Dawn: The Series brings some gravitas to the production and is very strong in her performance as Michelle." ★★★★ screencritix.com/angel-of-anywhere-2017-short-film-review/ "Should you find yourself randomly watching this film at some point down the road, unless told by another, you would think it was produced by any one of your favorite studios. An exercise in near flawless design and execution...Angel himself, played by Axel Roldos, feels almost perfect. A real person who happened to be caught on camera for seventeen minutes. I simply can't stress enough how excellently this production flows onscreen. From the technical to the acting. It's all really top notch." ★★★★ indyred.com/angel-of-anywhere-review.html