An evening at the Lido in Worthing for a net working event. With interviews, music, awards and entertainment. I was the M.C and interviewer of this Newttworking evening for the Sussex Film Office While trying to avoid a hive of moody bees Abe must convince his runaway wife, Helen, to come home from an empty monastery. 'Cloistered Honey' is a mystery, a love story, and an exploration of what we... 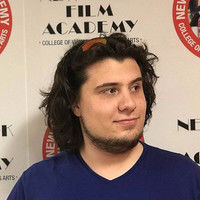 Trailer for my most recent short film, "PAWNS", a story about two enemy soldiers in World War I being trapped in a dugout and rediscovering their humanity. The project won at 4 festivals and was nominated at 7 others, including the Southampton International Film Festival. We had a budget of about £7,000 and were able to offer a production value of £25,000. "PAWNS" was made in collaboration with the company that provided costumes and weapons to the TV series "Black Sails" and the stunt coordinator from "Doctor Strange". Cast boasts previous credits from "Rogue One", and "The Man From U.N.C.L.E."