On a night that would have marked their eighteenth wedding anniversary, a grieving husband processes the loss of his soulmate. 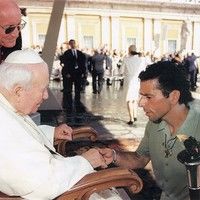 From 1988 to 1998, our Recovery from Opioids was filmed. In 1988 I actually picked up a State of the Arts Panasonic video camera, from the Stereo shop where I worked. We filmed constantly mostly at my best friend's house (Fab). His house became an open house where recovering addicts could go as they tried to stay clean & sober. We had about 2 dozen core members, & filmed a few hundred over the years. Only a few were really talented enough to be really good commentators behind the camera. Our unique hobby reached the rooms of Narcotics Anonymous throughout the world. It seemed half the people accused us of breaking NA Spiritual principals and would say "those Toronto West Enders were recovering with their Ego by filming each other". In 1995, I wanted to really pay it forward after I received a liver transplant, I produced a 10-minute film to use as a tool to address the Opioid Crisis. Is there anybody out there interested in doing something with thousands of hours of amazing spectacular footage. We made the Celebrity Rehab stuff look like really bad acting. Most of us came from Italian & Jewish backgrounds & besides recovering from Opioids we used to be, Hardcore Convicts, Hookers, Wiseguys, Bikers, Business people & even a Police Detective.. It's amazing how I used I what I learned in Recovery into the rest of my life, running my charity & stuff. Give me shout if you have any ideas & address this terrible Opioid Crisis