A short excerpt of my book Husker. Cinematography Demo Reel. From stock footage to the TORC show on Speed its been an exciting year. 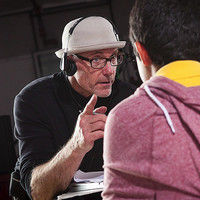 Circa 1976. A grant from public television in NYC allowed me to make this film advancing life-long involvement with sports. Hence the name Outside the Arena. The first sport we choose for the pilot was climbing and hiking mountains. Featuring 65-year-old Paul Petzoldt of NOLS fame and a man that got within two rope lengths of the summit of K2 in his youth, Paul guides the Boulder Spivy Family up the 10-mile ascent via the North face to the summit of Longs Peak. On the East side of the mountain climbers Roger Briggs and Keven Donald free climb at altitude. This film marked a milestone in recording sync sound in extreme environments via portable Nagra recording devices seen dangling from the climbers. Director/cameraman Bob Carmichael. Director/cameraman Roger Brown on the North face trek. see bobcarmichael.com for more information on director/dp/photographer/producer Bob Carmichael - renown climber/cinematographer Greg Lowe worked with Bob Carmichael to record all images.