My second short film during the pandemic. Life really is a dance. Seize the moment when you can:) Testing a stunt for a short film 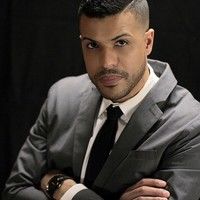 A Blood Throne Writer/Producer/Director Xavier Garcia earned his BA in Spanish Literature and Theater at Colby College, and this background is quite evident when watching A Blood Throne, a superb spinoff of the Gospel of Matthew's account of Herod, king of Judea. Based in Massachusetts, Xavier produced the film along with his brother Jonathan under the siblings' co-founded, award-winning production company Mount Harvest. Although their website touts their faith-based film cred, we had to ask them for clarification because their final product feels quite apart from an ordinary religious niche production. And Garcia will tell you that Sunday school is not really the point. It's more a case of mining the Bible for material, then building a highly dramatic narrative about the characters, settings and situations they find. King Herod is not typical fare for a Bible-inspired film, either; in fact, the last attempt we could find in a Google search was a 1958 Italian-French epic. Like other classically-trained dramatists, the Garcia brothers are intensely interested in characters who act unpredictably and often violently, creating a thunderstorm around themselves. And in a nod to effective structure, from this maelstrom enters another character who can counter the madness—to such an artist this could be Superman or the Biblical Jesus, it's almost beside the point. This dual role of conviction and exploration is what makes Xavier Garcia so interesting as a filmmaker. He does profess his Christian faith, but he is thoroughly committed to telling his story wherever it takes him. Whether a believer or not, one can respect an artist who hits his marks like this one. You can read more in the Glouchester Daily Times and/or watch the trailer here: A Blood Throne Trailer - https://www.youtube.com/watch?v=55Wqg2zQsUI