Starring Alain Leccia and Geneviève Lodovici. This is an independent production whose goal is to attract as many viewers as possible in order to present the project, to find investors and to prove th... YOU'RE THE CHURCH (Trailer #2)

The second preview of the new comedy feature film, YOU'RE THE CHURCH. Enjoy! LINK TO OFFICIAL TRAILER: https://youtu.be/IAx3zjLfC6M www.amaruflix.com 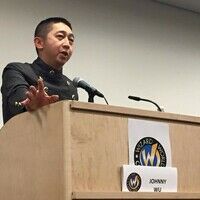 Hi all, I would like to invite you to consider supporting this independent film, and tomorrow (Sep 1st) it will be available in the USA on Amazon, BestBuy, Barnes and Noble, iTunes, and many other outlets. Immortal Combat The Code, released name by High Octane Pictures, is an low budget independent scifi action film that has been sold worldwide to countries like S. Korea, Taiwan, and many others. Immortal Combat The Code is a wonderfully choreographed martial arts scenes; non-stop action; Sci-fi inspired by popular anime with trending themes of world control and human monitoring via technology. Hidden Hollywood News said “non-stop action with incredible stunts!” Immortal Combat The Code has been accepted to multiple film festivals as well as winning Best Action Feature Film at the IndieGathering Film Festival and has been sold worldwide currently. Shot entirely (except one scene with BMPCC4k) with the Panasonic GH5 with Sigma 18-35mm, Panasonic 12-35mm, Panasonic 35-100mm and Sigma 30mm. Immortal Combat The Code tells the story of when a code was discovered that could save the world that was injected into a member of the 5 Elements, now everyone is after him while he's being protected by his clansmate. Below is the trailer released by High Octane Pictures as well as one of the scene, hope you enjoy this and consider supporting it. Thank you #immortalcombatthecode #action #scifi #independent #feature #martialarts #wuxia2thecode #supportindie