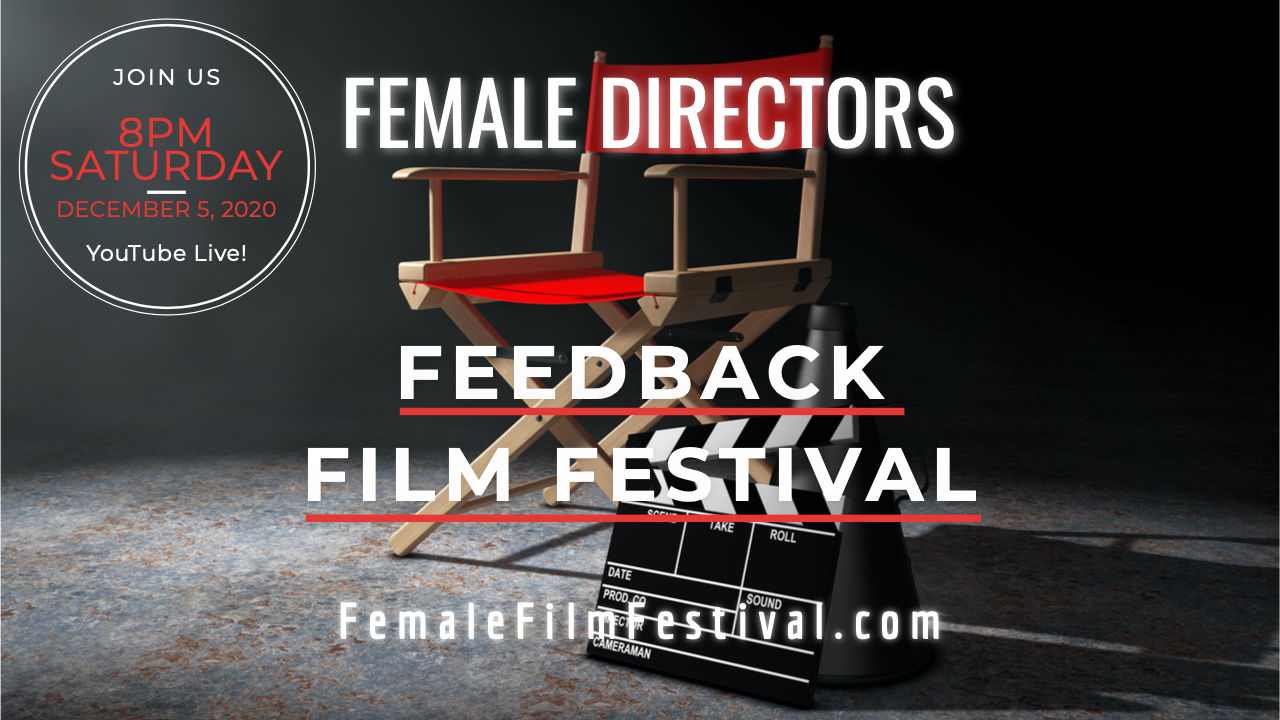 WATCH the next festival on Saturday December 5th for FREE; 8pm EST (5pm on the West Coast.).

Featuring best SHORT Films from around the world today:

Welcome to WILDsound’s Weekly Festival. Every Saturday night 8pm EST/5pm PST. Showcasing the best new films in the world today. Virtual events will always be FREE. Enjoy the show and come back next week.

Here is the full program of films. Festival starts at 8pm sharp!

MY DARLING CHRISTOPHER, 9min., UK, War/Drama
Christopher is, away serving in the Navy, receives a heartfelt letter from his wife, Dorothy. As he reads the letter English, BSL and Visual Vernacular interweave to tell the shocking story of a war plane crashing to the ground meters away from his son Clive’s classroom.

GIVE ME A NAME, 10min., UK, Sci-Fi/Thriller
The United Kingdom, about ten years in the future. Jennifer, a senior intelligence officer, is briefing her deputy Kate about a new detainee who has been arrested for crimes against the state. But there is something different about this prisoner…

BODY AND SOUL, 20min., Belgium, Drama
Lucie is a shy young girl, reluctant to talk about sexuality. When she finds herself forced to reveal her virginity at a friends’ party, rumours start to spread and she decides to do everything it takes to solve this “problem”. Even if it means turning away from herself to be like everyone else.

WAY BACK, 15min., Serbia, Family Drama
Dunja and Jasna are traveling with their mother Jovana to visit their father who lives alone in the cottage. DUNJA and JASNA are convinced that he had abandoned their mother because of the affair with another woman. By exchanging impressions of his action, they remember the past and reveal the expectations of a meeting. DUNJA treats this affair as a product of the father’s crisis and hopes the visit could reunite family, while JASNA has accepted the parent’s divorce as a final. Under the pressure, the mother reveals there was no adultery. She simply never loved their father.

GEORGE FLOYD: IT HAPPENED HERE, 6min., USA, Documentary
George Floyd cried out for help, begged for his life. A cry for help is a cry for humanity to be restored. In the midst of the uprising in Minneapolis, we captured raw thoughts and authentic truths from residents who live in the neighborhood where George Floyd took his final breath.

THE COLD (IOWÍSTO), 8min., Canada, Drama
The Cold, translated to Iowísto in Mohawk, written by Jesse Menard features a young Indigeouns family living in Northern Ontario with a few of their friends who have taken refuge at their farmhouse in efforts to escape the virus spreading fast in the city. A traditional tea recipe in the family passed down to Machk, Pete and Tapeesa keeps the group healthy – it’s not a cure, but the herbs are medicine that builds immunity to the virus.

HOME, BUT NOT ALONE, 4min., USA, Comedy
A day in the life of a mom on the edge during the COVID quarantine.

FRONTMAN, 17min, South Korea, Drama
Chaemin and Seonhwa are friends who major in playing ajaeng, a Korean string instrument, in high school. Right before the selection of roles for their regular concert, Chaemin feels that the teacher is playing favorite with Seonhwa but overlooks it. Now in their 30s, Chaemin and Seonhwa run into each other in the lobby of a concert theater.

REFLECTIONS, 4min., USA, Poem
Through the course of one poem written by an 8th grade student. Teenage women voice their struggle, growth and empowerment.

LEORA, 10min., USA, Horror
Things turn deadly, when a woman attempts to help a lost, mute child and her companion — a disquieting doll who appears to harbor protection schemes of her own.

Cannes Roll Call - Who's Going? Who Has Films?

Well, this is exciting. As you all know Stage 32 has has worked directly with and have had an official presence at the Cannes Film Festival for the last 4 years. This year, our role with Cannes has grown. We are thrilled to announce that we are an official education workshop partner with the Cannes Marche du Film!  Stage 32 will be presenting an official workshop to producers, filmmakers and other content creators on the importance of audience building, branding and crowdsourcing at the Marche titled: Crowdsourcing is not Crowdfunding - How to Build an Audience for You and Your Film. Additionally, Cannes, as supporters of our mission at Stage 32, and recognizing our place as the global leaders in online education for all film creatives, will be presenting all badge holders a free Stage 32 webinar! Our workshop will be presented by Stage 32 Managing Director and yours truly on Thursday, May 10th at 11:30am (more information below). We will be discussing many of the topics covered in Crowdsourcing for Filmmakers: Indie Film and the Power of the Crowd and will include industry case studies and crowdsourcing success stories featuring such filmmakers as Zach Braff, Ana Lily Amirpour, Lake Bell and Justin Simien. Last year, Stage 32 members from 8 countries had films screen at the festival. This year, Stage 32 member Michel Merkt, has two films as official selections competing for the Palme d’Or, UNDER THE SILVER LAKE and YOMEDDINE. Do you have a film screening at the festival? Let us know in the comments section below! Finally, once again Stage 32 will be hosting a meetup during Cannes. More details on the time/venue can be found below! If you're attending Cannes, let's start the official roll call. We (and the producers and executives we work with who will be at the fest) are specifically interested in knowing: - What dates will you be attending?- What brings you to Cannes?- What projects do you have screening or are you bringing to the market?- Are you planning on attending any workshops or events? If so, which ones?- What is your goal during the Cannes Film Festival? We look forward to hearing from you! RB   Please make sure to mark your calendars!   Producer's Workshop: Crowdsourcing is not Crowdfunding - How to Build An Audience for You and Your Film Date: Thursday, May 10 Time: 11:30am-1:00pm Location: Les Ambassadeurs - Palais des Festivals - Level 4 - Cannes Film Festival Speakers: Stage 32 Founder & CEO Richard "RB" Botto, Producer, Stage 32 Managing Director Amanda Toney Event: Education workshop for Marche du Film Producer's Network  (Click here for more info) Credentials: Must have Marche du Film Badge We will workshop best practices for crowdsourcing (which is not the same as crowdfunding) for you as a filmmaker. You will learn how to identify, engage and move an international audience using online and offline practices to build an army of support for you and your film. We will provide case studies on how various filmmakers have successfully used crowdsourcing to help make their films and build an audience while in development!     Official Stage 32 Meetup Date: Thursday, May 10 Time: 5:00pm - 7:00pm Location: Le Bar à Vin, 10 Rue Marceau, 06400 Cannes, France (more info) Credentials: Open to all Stage 32 members and colleagues of Stage 32 members (no badge required) Please: RSVP Here Stage 32 Founder & CEO, Richard "RB" Botto would like to welcome all Stage 32 members who are in Cannes this year to a the official Stage 32 meetup. The meetup takes place Thursday, May 10, 2018 from 5:00pm - 7:00pm. Come network with other Stage 32 members who have films screening and meet Stage 32 Founder & CEO, Richard "RB" Botto and Stage 32 Managing Director, Amanda Toney. We hope you will join us!       Like this blog post? Please share it on social media (Facebook, Twitter, LinkedIn, email etc) by using social media buttons at the top of the blog. Or post to your personal blog and anywhere else you feel appropriate. Thank you. As always, we welcome thoughts and remarks on ANY of the content above in the Comments section below...  Read More

Hello, my fellow creatives.  Happy Sunday. Hope you are all enjoying and participating in what has been a very lively Introduce Yourself Weekend! Today for Coffee & Content, I'm bringing you some voices with years of experience talking directing and screenwriting. First up, legendary director, Ridley Scott waxes poetic on the craft of directing.  As usual, no pulled punches from Sir Ridley.  Nothing more for you to do with this one than pour yourself a full cuppa and kick back. Next, from our friends at Film Courage, a compilation piece featuring some screenwriters with some road beneath and behind 'em.  This one is called 10 Important Lessons on the Craft of Screenwriting.  Grab something to write on for this one - many takeaways to be had. As always, I ask you first and foremost to share.  Pay it forward.  It feels good.  And you can do so by hitting those cool share buttons in the upper right side of this page or by simply emailing the link to those you feel might benefit from the content. And, as you know, you're on a social media and networking platform!  And the easiest way to stand out is by being visible and expressing an opinion!  You can do both by leaving your thoughts in the comments section below. Enjoy the content and the coffee! Cheers! RB     Ridley Scott on Directing 10 Important Lessons on the Craft of Screenwriting   Like this blog post? Please share it on social media (Facebook, Twitter, LinkedIn, email etc) by using social media buttons at the top of the blog. Or post to your personal blog and anywhere else you feel appropriate. Thank you. As always, we welcome thoughts and remarks on ANY of the content above in the Comments section below...  Read More