Uncategorized : If you want a career in the EN… by El Hadj Loudhni 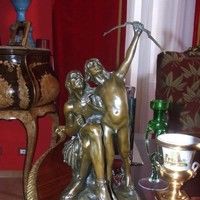 If you want a career in the EN…

If you want a career in the ENTERTAINMENT BUSINESS, don't let anything or anyone make you feel like it's out of your reach. You'll never know until you try. Walt Disney was fired by a newspaper editor because "he lacked imagination and had no good ideas." He went bankrupt several times before he built Disneyland. In fact, the proposed park was rejected by the city of Anaheim on the grounds that it would only attract riffraff. Charles Schultz had every cartoon he submitted rejected by his high school yearbook staff. Oh, and Walt Disney wouldn't hire him. After Fred Astaire's first screen test, the memo from the testing director of MGM, dated 1933, read, "Can't act. Can't sing. Slightly bald. Can dance a little." He kept that memo over the fire place in his Beverly Hills home. Astaire once observed that "when you're experimenting, you have to try so many things before you choose what you want, that you may go days getting nothing but exhaustion." And here is the reward for perseverance: "The higher up you go, the more mistakes you are allowed. Right at the top, if you make enough of them, it's considered to be your style." After his first audition, Sidney Poitier was told by the casting director, "Why don't you stop wasting people's time and go out and become a dishwasher or something?" It was at that moment, recalls Poitier, that he decided to devote his life to acting. When Lucille Ball began studying to be actress in 1927, she was told by the head instructor of the John Murray Anderson Drama School, "Try any other profession." The first time Jerry Seinfeld walked on-stage at a comedy club as a professional comic, he looked out at the audience, froze, and forgot the English language. He stumbled through "a minute-and a half" of material and was jeered offstage. He returned the following night and closed his set to wild applause. After Harrison Ford's first performance as a hotel bellhop in the film Dead Heat on a Merry-Go-Round, the studio vice-president called him in to his office. "Sit down kid," the studio head said, "I want to tell you a story. The first time Tony Curtis was ever in a movie he delivered a bag of groceries. We took one look at him and knew he was a movie star." Ford replied, "I thought you were supposed to think that he was a grocery delivery boy." The vice president dismissed Ford with "You ain't got it kid, you ain't got it… now get out of here." Michael Caine's headmaster told him, "You will be a laborer all your life." Charlie Chaplin was initially rejected by Hollywood studio chiefs because his pantomime was considered "nonsense." Decca Records turned down a recording contract with The Beatles with the evaluation, "We don't like their sound. Groups of guitars are on their way out." After Decca rejected the Beatles, Columbia records followed suit. In 1954, Jimmy Denny, manager of the Grand Ole Opry, fired Elvis Presley after one performance. He told Presley, "You ain't goin' nowhere, son. You ought to go back to drivin' a truck." Beethoven handled the violin awkwardly and preferred playing his own compositions instead of improving his technique. His teacher called him "hopeless as a composer." And, of course, you know that he wrote five of his greatest symphonies while completely deaf. Van Gogh sold only one painting during his life. And this, to the sister of one of his friends, for 400 francs (approximately $50). This didn't stop him from completing over 800 paintings. Leo Tolstoy flunked out of college. He was described as both "unable and unwilling to learn." No doubt a slow developer. Louisa May Alcott, author of Little Women, was encouraged to find work as a servant by her family. Emily Dickinson had only seven poems published in her lifetime. 18 publishers turned down Richard Bach's story about a "soaring eagle." Macmillan finally published Jonathan Livingston Seagull in 1970. By 1975 it had sold more than 7 million copies in the U.S. alone. 21 publishers rejected Richard Hooker's humorous war novel, M*A*S*H. He had worked on it for seven years. 27 publishers rejected Dr. Seuss's first book, "To Think That I Saw It on Mulberry Street." Jack London received six hundred rejection slips before he sold his first story. Let's end with Woody Allen: "I don't want to achieve immortality through my work. I want to achieve it through not dying. Eighty percent of success is showing up." The message? Don't ever give up. Don't let anyone stop you from achieving success. Keep going, don't lose faith, and don't ever quit. Love ya folks

This is superb! Thanks so very much for posting.

Great post. :) I often find myself second guessing and losing hope. I always think I'm starting out late and too old to be successful but I got to get out of that mind frame. Really liked this post. :)

I will. Thanks and have a lovely day

Other topics in Uncategorized: