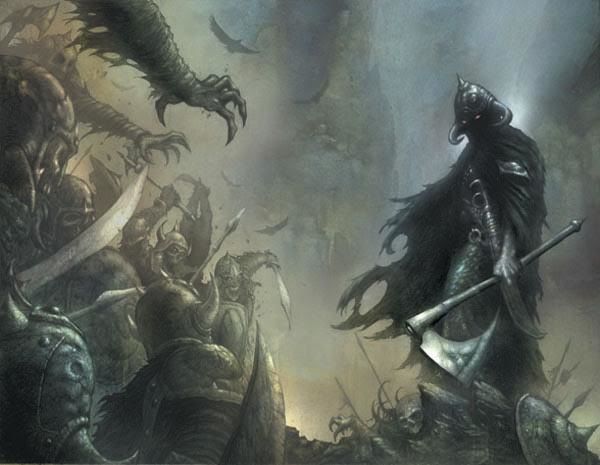 OF WOLVES AND MEN
By Robert Dan O'Neill

A rugged princess teams up with a group of legendary warriors to take down vicious beasts that threaten her land.

TARJA is the young princess of a land that has been invaded by a horde of man-eating beasts led by the evil VARAN. Her father is a coward, hiding in his castle and refusing to do anything to help their people.

An old woman, the only survivor of the latest attack, tells Tarja their only hope is to call upon the BERSERKERS, a roving army of warriors who live only for honorable combat. Their leader, DRAC DEALER, is a grim legend, said to be Odin’s chosen champion, almost unstoppable on the battlefield.

Tarja goes to the Valley of the Wolves, and is discovered by ASGARD, Drac Dealer’s second-in-command. He takes her back to their camp, where Tarja pleads for help from the berserkers.

However, Drac Dealer isn’t interested in coming to her father’s aid; the king’s men slaughtered his family when he was young, and the idea of rescuing the king’s land, or accepting his daughter, is bitter.

But Tarja passes all of their savage tests, proving that she is not her father’s daughter, and her only desire is to protect those who can’t defend themselves from Varan and his beasts.

And so it is that Drac Dealer marches his berserkers off to war. Along the way, Tarja realizes that the man called Drac Dealer is actually WULFGAR, the lost son of the woman who told her to seek out the berserkers.

After fighting their way through demon-haunted lands to reach the kingdom, they face a horde of beasts many times their number. But the berserkers have never run from a fight, and they all prepare to make the ultimate sacrifice in the hopes of finding a brave death in righteous battle…