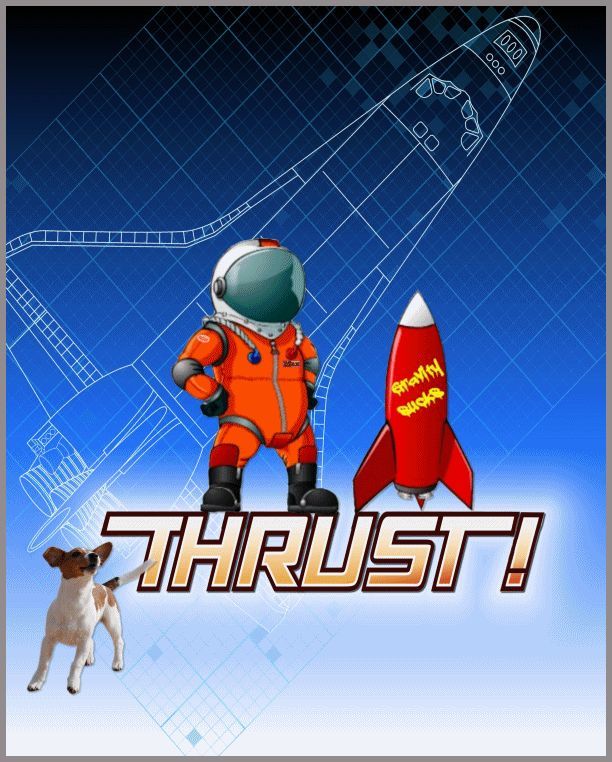 When test pilots are marooned in Low Earth orbit, a scrappy teen might have "the right stuff" to rescue them if he survives the training, keeps it secret from his mom, learns to dance, and asks his high school crush to prom.

Written along the lines of films like "The Karate Kid" and "The Right Stuff", THRUST! is the uplifting story of MAX, a young rocket geek from Lompoc, California, who at a tender age witnesses the catastrophic rocket launch that kills his father. Raised by struggling single mom CAROLYN, Max is a quirky, sharp-witted outsider ridiculed by some as Spaceboy. But something other than rockets has occupied Max’s thoughts lately. APRIL, a statuesque ballet nerd, is Max’s unrequited love interest. On the other hand, the WINGSTAR, an exotic spaceplane owned by Granger Aerospace, is a very close second.

At the WingStar’s unveiling Max runs into KERBY WRIGHT, descendant of the Wright Brothers and CEO of Wright Orbital Systems; Granger’s direct competition for the coveted ASTRA Orbital Hotel contract. Kerby is also, in Max’s mind, the man most responsible for his father’s death. When Kerby volunteers to take Max to his rocket club meeting, Kerby sees the depth of Max’s love of rocketry. Kerby watches the flight of a High Power Rocket Max designed and built with his club buddies, The Lompoc Rocketeers, where Max goes by the handle: THRUST. During this serendipitous reunion Kerby, seeing his possible successor, offers Max an internship to train on the COMET launch system and Max accepts.

Later, April asks Max to tutor her in Algebra. April needs a 3.5 GPA to qualify for a summer dance fellowship, but her math skills threaten to put the kibosh on her plans. In return, April will teach Max to dance in time for the annual Winter Formal. They become fast friends.

But Max has a competitor for April’s affections: conniving, arrogant TODD the Quarterback. Todd will do anything to win, including blackmail Max into convincing April to go with Todd to the dance. Todd has unearthed Max’s secret; he’s been lying to Carolyn about what he does at Wright Orbital Systems after school.

At the dance the plot thickens. Todd puts a plan into action to break up Max and April for good by making it appear that Max has betrayed April’s trust. Things go from bad to worse when Carolyn learns about Max’s lies and the dangerous training he’s been doing. Max ends up alone and friendless on Christmas Eve night, roaming the empty streets of Lompoc.

Grounded on Christmas day, Max watches TV coverage of the WingStar’s maiden flight. The test flight goes horribly wrong. The pilots become stranded in Low Earth Orbit without food, water, or heat and only hours before they burn up on reentry. There isn’t a single asset available to rescue them. With the improbable exception of Max and The Comet!

The world holds its collective breath as a small-town teenager climbs aboard the Comet and lifts off on a perilous mission to rescue the pilots and claim his father’s legacy.