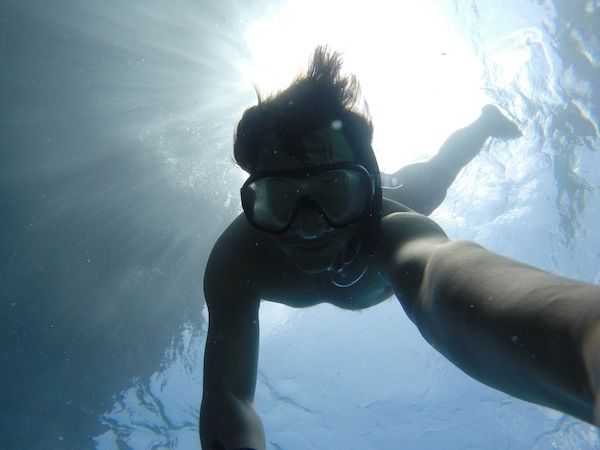 A sensitive twelve-year-old boy who worships his father, dives into the rough waters of manhood when his idol morphs into a beast.

Chris, a gangly boy of six, his mother Liz and infant brother Eric vacation at a lakeside resort.

Chris loves snorkelling and investigates the lake bottom for hidden treasures and one day finds an old holey pail that he shows off to his mother. That night at dinner, Chris pines for his father and Liz assures him that his father, Wally, will arrive on the weekend.

The next day Chris meets a new friend Jamie and they explore the dock area and wonder why one of the docks has been abandoned. They enjoy a fun filled afternoon until Chris gets attacked by a leech and both boys get traumatized.

Chris is awakened in the night by the arrival of his drunk father and as Chris spies on his parents his father deprecates his son.

The next day and all day, Chris waits for his father in the lake pondering what his father said the previous night. His Dad finally arrives and no matter how much Chris coaxes, he won’t join Chris in the water. His father notices a dog owner and dog playing fetch in he water and Chris’s father covertly suggests he and Chris do the same with the pail. Starved of affection from his father, Chris is all too eager to please his dad and they both manage to enjoy themselves until his father throws the pail into the leech area.

Chris refuses to get the pail and for the first time in his young life he stands up to his father. His father is furious and from Chris’s perspective becomes an enraged beast and Chris fears his father may do him physical harm.

Chris, terrified, manages to sprint by his father and seek the safety of the cottage and his mother.

His father smashes through the door, soaking wet and clutching the old pail, bent on taking his anger out on his son. But on this day, Chris isn’t the only one who stands up to the wild beast and his mother unceremoniously kicks Wally out watched closely by the concerned neighbours.