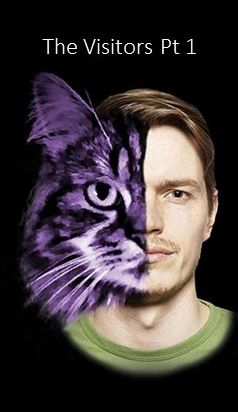 THE VISITORS 1
By Andrew Cahill-Lloyd

Ptoni the Pteranodon is a fish out of water. He's been transported to the Year 2016 and discovers a very different Earth. With the assistance of time-travelling aliens, and a small band of misfits, he sets out on a journey to understand religion and its effect on humanity.
Alien abduction can be fun!

“The Visitors” is a feature film in the Sci- Fi Genre. It is also a Family movie with a message.

It is also infused with a generous sprinkling of humour. Not for those with religious sensibilities.

They teach older children (Ages 9 to Mid-teens) that Racism, Homophobia and Religious Oppression are outdated concepts. I want Children to understand that there is a better way.

Two time travelling, shape shifting aliens, Bjorn and Zorn, witness the destruction of the Earth in 2032. They travel in time to collect a little band of misfits, to help them save humanity from its Religious Wars. Alien abduction can be fun!

The story takes place in the current day, through to the Year 2032. We travel to Saturn’s moon Enceladus, as well as the fictional planetary system of Aeon. We visit several locales on planet Earth such as New York, the Middle East and Australia.

The concept of “Religion” is set/painted as a protagonist, and becomes a source of conflict, sometimes in concept and sometimes in real actions, with religious leaders placing obstacles in the way of our characters.

It takes until the end of the third book (movie) before they finally solve the issue and restore the Earth to her former glory.

The year is 2032. An Alien spacecraft is seen observing Earth. The passengers are shape shifters, in the form of a bright purple cat called Zorn, and a bright green dog called Bjorn,that are a kind of a “two in one” deal. They discuss the Religious Wars unfolding on their screens. They express disdain. As they look on, the planet explodes, and disappears in the mists of time. (Both possibly played by ONE ACTOR - Adam Lambert?)

They time travel to Jurassic times. A Pteranodon, called Ptoni, is seen peacefully eating a fish he has caught and a rumble is heard. He looks up to see a huge comet hurtling towards the Earth.

Confusion is everywhere, with Dinosaurs scattering in a panic. As Ptoni takes to the sky, he disappears into thin air. The asteroid strikes the Earth and the entire surface of the planet bursts into flame.

Ptoni the Pteranodon is a fish out of water. He’s transported to the Year 2016 and discovers a very different Earth. Along with a small band of misfits he sets out on a journey to understand Religion and its effect on Humanity. He is very laid back, and the focal point for understanding what Religion is about. (John Legend?)

Ptoni is transported to the spaceship with Bjorn and Zorn. They create a ball of light, called an Integration Ball that, under its own power, enters the head of Ptoni. Communication begins.

Bjorn and Zorn time travel back to 2015 and collect a small band of helpers. Animals are seen to disappear in quick succession. Dax the Maine Coon Cat: is very cheeky, and drives a lot of the humour.

Florence the Jersey Cow, is the quite voice of reason.

Penelope the Adelie penguin, is very excitable Each one is seen to receive an Integration Ball, and communication begins. Chaos ensues.

They encounter many stressful situations and drama along the way as well some LOL comedy moments and fun. Stress relieving laughs is the way they deal with the Drama.

An initial discussion about Religion leaves everyone a little stressed and confused.

A visit to Antarctica gives everyone a good laugh at Florence’s expense, as she slides on her derriere across the ice. (Provides humorous relief from the heaviness of the previous scene.)

Bjorn and Zorn decide to reveal their identities to the world. They materialize before crowds, simultaneously in the Gaza Strip, and New York. Panic ensues, and they are chased by angry mobs. Bjorn is cornered in the top of the Statue of liberty. Zorn is cornered against the Wailing Wall.

Bjorn and Zorn shapeshift and become two Pteranodons to fly away from their captors.

Zorn is shot, as they dematerialize, although He is Ok.

We learn that Dax has an obsession with Chicken Nuggets. This provides repeated humor, even at unexpected times. The animals create havoc for a Drive Thru Attendant, when Bjorn takes a shuttle pod to get them dinner. (More humorous relief.)

A curious investigation by Dax and Ptoni result in them being stranded in space in a Shuttle Pod. High drama and Comedy rolled it into one. Bjorn and Zorn teach them a lesson. (More humorous relief)

A late night discussion between Zorn and Ptoni attempts to answer Ptoni’s questions on Religion.

The following morning, the animals begin to ask questions about Bjorn, Zorn, and their home planet Aeon. Bjorn and Zorn reveal they have a hidden base on Saturn’s moon Enceladus. They take the animals for a visit.

They discuss, Homophobia, Racism and Religious Oppression over dinner. Bjorn and Zorn have difficulty understanding Homophobia as their races is gender neutral.

On return to Earth, Bjorn and Zorn takeover the Earths communications network and with the help of the animals talk to Humanity about their choices and Bigotry. They beg Humanity to stop the fighting.

Changes begin to unfold before their eyes and the animals feel like super heroes.

The animals attend a State Dinner on the Aeonite Home world.

They have a little fun in the form of a race around the Andromeda Galaxy with Brax and Flax.

They encounter a mysterious unknown spacecraft for the first time. It pops up from time to time, throughout the scripts. They become major characters in book/movie 3.

They discuss racism over dinner. They discover the Integration Balls have given them the ability to change color. They have fun practicing. They discuss that they feel all of humanity should be given an Integration ball. If they could be any color, it wouldn’t matter what color they are.

On the return flight home Dax and Ptoni find Florence and Penelope watching soap operas crying, and have some fun at their expense. (More humorous relief)

Plot Twist. On return to Earth, in 2032, they discover the Earth is still missing. They find a slight disruption in time. They agree to meet on Enceladus to formulate a plan. Zorn heads for 2006 to collect someone called the Professor.

We are introduced to a new character. The slightly arrogant Professor Evie Tobin the French bulldog. Problems ensue with Dax the Maine Coon cat.

Bjorn and Zorn fill Evie in on the recent occurrences, and the crew visit Enceladus to discuss the missing Earth with Emperor Tiko. They formulate a plan of action.

An attempt by Evie to bond with Dax is brushed away.

We meet two new aliens Brax and Flax, when they join Bjorn and Zorn on the investigation.

Dax runs into the wrong spaceship when they decide to visit the Earth, and discusses his feelings towards Evie with Brax.

The animals are overwhelmed with the sights of the Jupiter and Mars as they travel to Earth.

They run into the Unknown ship again, and unable to see the occupants they discuss their origins and possible species.

The animals talk Bjorn and Zorn into a visit to the moon. Florence is sliding on her butt gain.

A fright for Dax starts a bonding arc for Dax and Evie.

On return to Earth Bjorn, Zorn, Dax and Evie take a shuttle pod and contact Alfie the Drive thru attendant again. Alfie agrees to return to the ship with them to help with their investigation.

We learn there is a lot more to the “Alfie” story and that there is two Aeonite engineers missing somewhere on Earth.

When NASA realises the aliens are in orbit they attack one of the ships. The ship is destroyed and Brax and Flax are killed. They return to Enceladus to report their findings and the loss of Brax and Flax. We learn that the new US is president is Christian and determined to hide the Earth from the universe.

A discussion sorts out the information they currently have, and points them in the right direction. Back To Earth. They orbit above Paris and continue the investigation.

After a walk from the Eiffel Tower to the Louvre, they return to the ship, having recovered one of their missing engineers. On return to the ship they find angry NASA voices that again fire missiles at them. This time they miss.

The Engineer, Elva’s health is bad and they rush back to Enceladus to give him the medical attention he needs.

While Bjorn and Zorn are way Alfie creates a Jurassic environment in the Holo chambers. The animals love it and spend a lot of time there.

Further discussions on Enceladus result in a change of plan and a two week wait for backup ships.

The animals spend more time in the Jurassic environment.

The animals discuss the effects of Religious entitlement over dinner. Alfie decides the conversation is bumming him out and hits the stage to get everyone partying.

The following day the animals are having trouble getting out of bed for the next part of the adventure.

Preparations are made to return to Switzerland

The investigation is interrupted when the Unknown Ship calls for help from the year of 2030.

Please note this script has had a title change.

The former title was "Atheisaurus 1 : Bjorn and Zorn