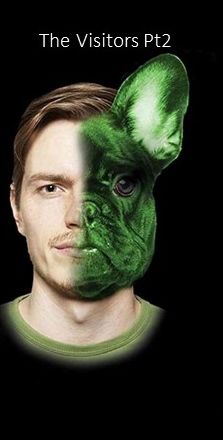 THE VISITORS 2
By Andrew Cahill-Lloyd

The great adventure continues. Will we find our missing engineer? Will we save the Earth?

“The Visitors 2” Synopsis: By Andrew Cahill-Lloyd

Bjorn and Zorn fill Evie in on the recent occurrences, and the crew visit Enceladus to discuss the missing Earth with Emperor Tiko. They formulate a plan of action.

An attempt by Evie to bond with Dax is brushed away.

We meet two new aliens Brax and Flax, when they join Bjorn and Zorn on the investigation.

Dax runs into the wrong spaceship when they decide to visit the Earth, and discusses his feelings towards Evie with Brax.

The animals are overwhelmed with the sights of the Jupiter and Mars as they travel to Earth.

They run into the Unknown ship again, and unable to see the occupants they discuss their origins and possible species.

The animals talk Bjorn and Zorn into a visit to the moon. Florence is sliding on her butt gain.

A fright for Dax starts a bonding arc for Dax and Evie.

On return to Earth Bjorn, Zorn, Dax and Evie take a shuttle pod and contact Alfie the Drive thru attendant again. Alfie agrees to return to the ship with them to help with their investigation.

We learn there is a lot more to the “Alfie” story and that there is two Aeonite engineers missing somewhere on Earth.

When NASA realises the aliens are in orbit they attack one of the ships. The ship is destroyed and Brax and Flax are killed. They return to Enceladus to report their findings and the loss of Brax and Flax. We learn that the new US is president is Christian and determined to hide the Earth from the universe.

A discussion sorts out the information they currently have, and points them in the right direction. Back To Earth. They orbit above Paris and continue the investigation.

After a walk from the Eiffel Tower to the Louvre, they return to the ship, having recovered one of their missing engineers. On return to the ship they find angry NASA voices that again fire missiles at them. This time they miss.

The Engineer, Elva’s health is bad and they rush back to Enceladus to give him the medical attention he needs.

While Bjorn and Zorn are way Alfie creates a Jurassic environment in the Holo chambers. The animals love it and spend a lot of time there.

Further discussions on Enceladus result in a change of plan and a two week wait for backup ships.

The animals spend more time in the Jurassic environment.

The animals discuss the effects of Religious entitlement over dinner. Alfie decides the conversation is bumming him out and hits the stage to get everyone partying.

The following day the animals are having trouble getting out of bed for the next part of the adventure.

The investigation reveals that Humanity is playing with time travel.

NASA fires on them again and damages the ships engines.

They are rescued and towed back to Enceladus by the Unknown Ship.

The report to the Emperor reveals that the missing engineer is in fact giving Humans technology beyond their capabilities. These include Time Travel and Cloaking Technology.

The investigation leads them back to Zermatt, Switzerland at the foot of the Matterhorn. We meet Molly the Suffolk Sheep.

We learn the animals have helped Bjorn and Zorn in the past, but have had their memories wiped and have forgotten. Bjorn reveals Dax was at Roswell in 1947.

Zorn and Evie take a ride on a Cable Car and have a creepy encounter with a strange Christian man.

The animals play up a when Bjorn and Alfie go to the restaurant for dinner. They order room service.

The investigation leads them to the Hadron Collider at CERN. The missing engineer interrupts the CERN visit, reveals his role in the mystery, and fires on them again.

Zorn and Ptoni’s friendship helps Zorn again to help him clear his head.

The scans of CERN reveal a big piece of the puzzle. We learn the Humans are trying to create a planet wide shield that displaces time and hides the Earth from the universe.

The missing Aeonite engineer, Dorian arrives at the resort in Zermatt pretending to be Bjorn and Zorn in an attempt to find out how much they know.

Molly reveals she originated in Australia and is also pregnant. Zorn reveals Molly is a clone.

Zorn takes Molly with them and she joins Florence on her farm.

Zorn deliberately creates a “Twilight Zone” circus, to drop Molly off into the cattle farm. The press eat up the “aliens gave me a sheep story”. Florence and Molly have a huge laugh over the whole affair.’

Dax asks about his role in Roswell. They watch the recording on the view screen.

They are contacted by Mot and Zot that the ship is ready.

On the way back to Enceladus they discuss the Masters.

Mot and Zot reveal they have had contact with a Planet recently discovered by the Kepler space craft. The planets inhabitants call it Ateki.

The crew arrive at Caprice and meet the Masters.

The masters tell them they should not have given Humans new technology.

They instruct Bjorn and Zorn to remove Dorian from the Earth, and then go back and erase themselves from the time line.

They agree to first contact with the Humans but no further help.

The crew visits Ateki on the away back to Enceladus. They discover a technologically advance people that want to be left alone.

Commander Dorian contacts Aeonite Command and threatens them with war.

The Emperor doesn’t take to kindly to the threat and authorises Bjorn and Zorn to use deadly force if necessary to remove him from the Earth.

Bjorn and Zorn inform the Emperor of the Masters wishes, and it sends a ripple through the entire crew.

Mot and Zot have received a brand new more advanced ship. They agree to take the crew with them to the Earth in the ship. The new technologies will help with the extraction of Dorian. It should also mean the Humans can’t detect them.

A visit to Zermatt reveals Dorian is in the Johnson Space Centre in Houston.

Dax and Evie visit the Johnson Space Centre to provide a distraction to give Bjorn and Zorn time to cycle the new technologies to capture Dorian. They start in the Zero G diner and take a tram across to Mission Control.

The diversion is successful and Dorian finds himself in the Brig on the Caprician Vessel.

Dorian revels that Brax and Flax are in fact alive. He destroyed their ship as a cover that he was actually abducting them.

Brax and Flax are recovered but both are near death.

Bjorn and Zorn travel to 2032 to investigate threats that Dorian has made.

They discover that the Maître D at the Zermatt resort is in fact a traitor, along with the man Florence calls the Farmer. Alfie Is shot.

Travelling back to 2018 they discover there is a whole communications centre under the barn at Florence’s farm. Humans have created a Matrix that encompasses the entire planet.

There are three points across the globe that form a triangle, and the basis of the Matrix, The Hadron Collider at CERN, Houston Space Centre, and this new facility,

at Longreach Queensland. It is revealed that the Matrix will created a Cloak around the Earth with a time shift that will hide it from the Galaxy. The idea is to enable one Religious faction to hold onto control, whilst using alien technology to achieve it. Florence remarks that she thinks that’s hypocritical. During a meeting on Enceladus it is decided to use an EM pulse to burn out the facilities.

As they prepare to use the pulse a huge solar flare is detected. They barely escape.

A large piece of debris completely tears the engines from the ship.

Mot and Zot appear and take the Z3 into their shuttle bay. The Earth is gone.

The Humans had switched on the Matrix. The Solar Flare hits just as the Tachyon facility is coming on line. It causes an overload and the massive feedback, causing the Hadron Collider in CERN to explode. This extremely unlikely chain of events means the Earth is destroyed in the process. The crew begin to realise the Earths destruction is actually a paradox. They realise that the use of dangerous technologies, is the reason that a solar flare could take it out.

Dax returns home with the ball intact. He wants to remember his space adventures.

Ptonis decides to stays on the Z3 feeling he has nothing to go home to.

Tobin decides to stay on the Z3, and return to Aeon for further study.

Bjorn, Zorn, Penelope, Tobin and Alfie are seen on the bridge of the Z3.

Ptonis sits on his usual perch behind them.

They return to the night they first revealed themselves to Humanity in the Middle East, and the Statue of Liberty. They watch themselves, returning to Brax and Flax’s ship. They watch as Bjorn shapeshifts to heal his bullet wound. Before leaving the Earth behind, they drop into orbit above Longreach Queensland.