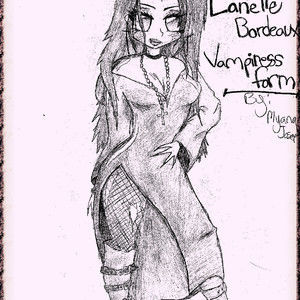 Lanelle Bordeaux enlists college-sophomore Murray Longford to help revive a 7-foot bleeding heart flower named EVE, that provides actual blood to her group of herbivore gypsy Vampires. (It's a mix of Lost Boys meets New Jack City) In a BLUR...it will all be over.

A popular but mysterious drug wrecks havoc amongst the city where users end up dead in a bloody mess, inflaming the law, political pundits and local gangs for the power.

Caught up in the mayhem is Murray Longford, an undecided college student riding on a baseball scholarship, is experiencing a trip into the twilight zone.

Meeting beautiful but desperate Lanelle Boudeaux, his life flips from average to extreme. Unbeknownst to him, she’s an underground vampire gypsy.

Ageless Lanelle seeks aid for her ailing special flower, the enchanting ‘Eve’. Eve holds the key to her tribes survival. Ironically, Murray has inherited the gift of botany from his mother who has fell terminally ill. Assisting in her quest, they form a special connection that transcends their differences, leading to a forbidden romantic bond.

Complicating things is Murray’s childhood friend Frederick Davenport, a local gang banger who wants to recruit him into their fold. Their gang, ‘The Illmatics’, lead by the charismatic and sadistic B.C., is embroiled in street turf wars with other gangs, police, and the mysterious Midnight Marauders, who have taken over the crime trade with the new drug.

The Midnight Marauders are actually a renegade band of vampires led by the diabolical Lincale Desmond, who have concocted the drug from Eve’s petals that when smoked; it purifies victims blood for consumption. Developed under the frustration of weak humans indulging in prescription pills, alcohol, and illegal drugs that mess with a vampires stomach.

As the body count mounts, a renegade cop named Charlize Smithers, teams with suspect Murray to solve the mystery using unorthodox methods. In the meantime still seeking who attacked her sister many years ago. A guardian vigilante, only known as MR. E, also assists in their quest.

Thwarting both camps is another unforeseen political force, blocking progress, crafting their own vengeance against vampires and humans, awaiting their day to rule the city.

My BLUR script portion is one we are planning to shoot this summer entitled 'BLUR Frat party massacre' A little taste of the entire script! Hope you enjoy!