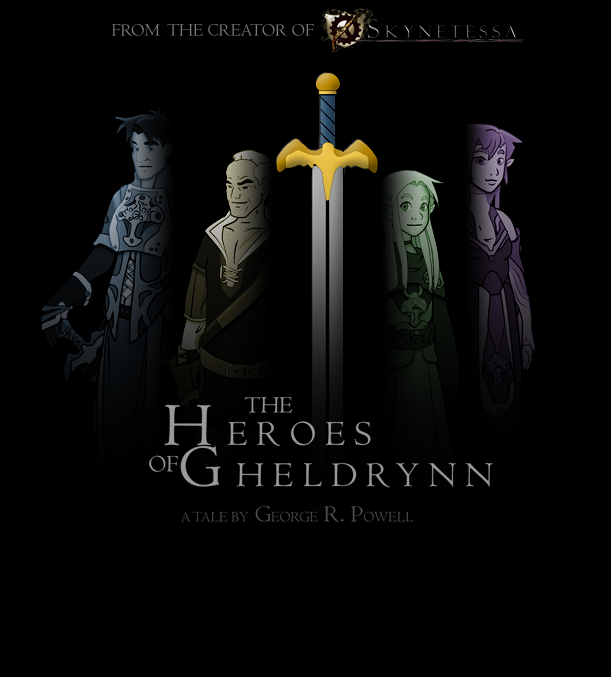 THE HEROES OF GHELDRYNN
By George R. Powell

After four dysfunctional heroes prevent a necromancer's uprising and save the land of Gheldrynn, they are called upon once more to investigate an epidemic of children being possessed by demons and attacking their own villages. They set forth on what they believe will be a simple quest to find and put a stop to the power of Darkness; little did they know that, to do so, they would have to face the Darkness within themselves...

This self-aware, irreverent Fantasy Comedy/Adventure follows the four heroes of Gheldrynn (from left to right, in the poster image):

When Lord Gris turned to necromancy and began to amass an undead army to bring destruction to Gheldrynn, Captain Lyle of the Holy Order's Paladins called upon an old friend, Mellos, and the party he'd been recently travelling with, to aid them in the fight. Once Gris was defeated, the undead were no more, and the four were honored as The Heroes of Gheldrynn.

As news spread of children being possessed and attacking their own villages, here and there across the land, King Lysander called upon the heroes to investigate and to seal away the Darkness, once and for all. Their only lead: the whispers of an old sage in the mountains to the north, who is believed to have one of the surviving Darc'Aegan texts - which contain the forbidden knowledge and spells from the Shadow Realm.

Their journey takes a turn, however, when Mellos uses the opportunity to attempt using a Life Trade spell to trade himself for someone else to be brought back to life - unbeknownst to his friends. When this goes awry, they find themselves drawn into the Shadow Realm itself.

Once they find the Shadow Guardian, they learn that there are now Dark counterparts of them in the Mundane Realm (the physical world) that mean to wreak the rampage they have always wished upon all who have wronged them. In order for the Shadow Guardian to restore the balance as it should be, they must face their own Darkness, accept it and the role it's played in shaping the person they became, and embrace (as the Darc'Aegan name itself, in the Elven tongue, translates to "Dark Embrace") the weaknesses, insecurities, and sorrow that they hid away in the Darkness.

"The Heroes of Gheldrynn", originally created to be both a love-letter and parody of High Fantasy stereotypes and cliches, ended up becoming something much more. While it does retain its playful tone of only taking itself seriously when it needs to - despite working in a fair amount of self-aware meta humor, it still tells a serious story of heroes who had never grown from their worst life experiences, and how being forced to face what they'd run from their whole lives ended up helping to complete them as more mature and fulfilled people.

Because of its content, it is intended for a more PG-13 audience, since it not only has Fantasy Violence and some violent imagery that some may find disturbing, but also contains "PG-13"-level language as well as crude/sexual humor.

Feel free to contact me with any questions: setufirestorm@gmail.com