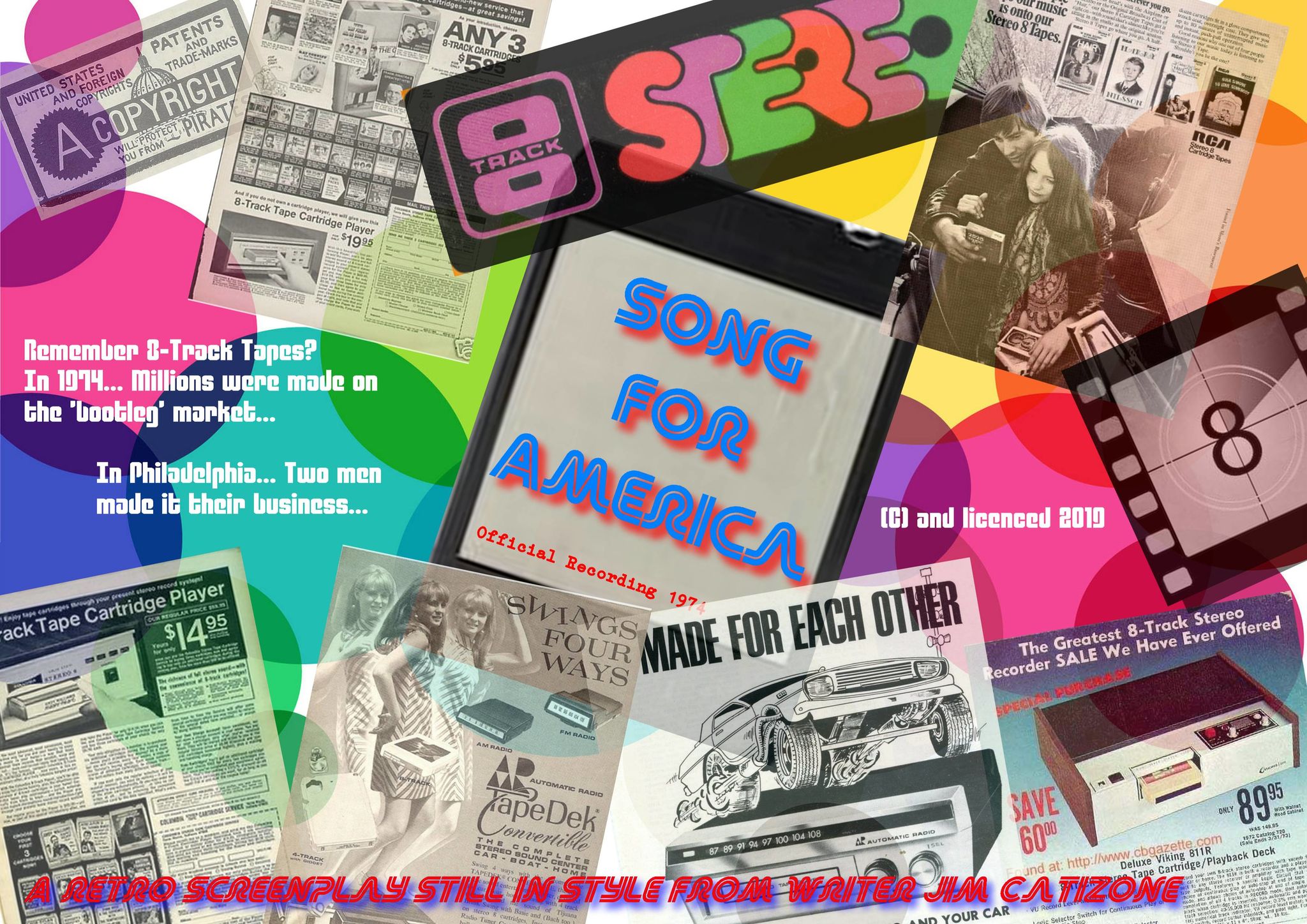 SONG FOR AMERICA
By Jim Catizone

In a turbulent 1974 Philadelphia, two ambitious men navigate the law, an unpredictable distributor and their own rash decisions, as they master the illegal 'bootleg' 8-track tape market.

In 1974 the music industry was exploding.

The 8 Track Tape had equaled the sales of vinyl albums.

The diversity offered in the 8 track, made it the 'hip' new way to take your music 'on the go' with you. The Automobile Industry mass produced the 8 track tape player for most modern cars of the time. The now king of the music media format, stepped to the front of national and international sales.

The smart and inventive entrepreneurs found a way to take advantage of this new found craze. This ushered in the beginnings of the 'bootleg' music industry and producing of 'bootleg' 8 track tapes.

'Tape Pirates' maneuvered their way around buying the fully licensed product. Mass produced with copies of the licensed recordings, 'bootlegs' were sold, much cheaper across the nation.

The record industry started a witch hunt for those responsible. By law, bootlegging was considered stealing and illegal. Across the nation, hundreds of 'bootleg' sellers made millions from this now booming illegal market.

In Philadelphia.. two men made their way through the turbulent society of an already crazy 1974, and joined in with the 'bootleggers'.

This is.. 'Song For America'

In 1974, seeing an 8-Track Tape was a daily normality. There was an explosion of sales, and the demand for product skyrocketed. The 'Finely Licensed' production lines of the 'Big Record Companies', could not furnish the supply.

Frank & Zach had quickly jumped into the underworld of 'Bootleg 8-Tracks'. They have just come off a productive three year run, and business is good. Yet, there is an unsettled fever in the air in Philadelphia. With the onset of summer, the concert season is the gravy of their year. Frank works another job as a Bartender at the family bar, and Zach, works at a Factory in North Philly.

Frank maintains a close relationship with his sister Maria, who owns the Bar. They are siblings and children of 'Restaurant Industry' parents. Frank is enjoying the 'Bootleg' business, but wants to eventually open his own restaurant.

Zach's parents live on the other side of the country. He has one sister, who he is not close to. For the past six years, Frank and Maria have been like family to him. Zach is still in his early twenties and figures, when it's time to settle, he'll probably be part of Frank's Restaurant.

Zach embraces the excitement of the 'Bootleg' business, and tolerates his full time job in the warehouse. For a small fee each month, Frank & Zach utilize a large unused area of the warehouse. Along with their two part time workers, Jackson & Sal, they have a solid storage base, to make them one of the biggest sellers of bootlegs in Philadelphia.

The Guys sell most of their tapes at concerts. However, they use a local legend in town to sell throughout the city. Stacy Colorado owns almost ten very profitable Record Stores in and throughout Philadelphia. She has become, business partner, music guru and loyal friend.

Most of the Bootleggers in Philly have faded from the scene. However, Frank & Zach's main competition, Ace, has been selling here since 1965.

Ace plays hardball with the guys, at almost every turn. Ace dresses more like a High end Pimp, than a down and dirty bootlegger. Ace prides himself in only getting his tapes from inside the US...

The increased sales of bootlegs in Philadelphia, have caught the attention of the Government & the FBI.

Scott Heinsner a Mid-West boy, now a determined agent, focuses in quickly on the Two Big Players in Philly.

Frank & Zach are Developing their relationship with their main distributor, Benito Carlisle.

Benito's second in command, the beautiful Marina Sanchez has become Frank's main connection. She was raised by Benito since the age of eleven. As part of Benito's courtesy, she is to get to know the guys and America better.

Zach's signs of attraction are reciprocated by Marina when she stays in Philly for an extended stay.

Frank meets Susan, a spitfire college graduate who claims the 1974 Championship Flyers, only won because of luck.

Through the main months of the 1974 concert season, Frank & Zach navigate stormy waters. The constant annoyance of Ace and his staff of thugs, the ever tightening tension of an almost unstable distributor, an American Society that is just coming home from Vietnam, and the overseeing eye of the FBI, right in their city.

Frank and Zach must decide what is important about their America. How long do they watch over their shoulder, can they maintain good standing without selling drugs, would this kind of business make their parents proud, where are their new relationships going, and how much longer can their luck hold up?

thank you both for the rating!