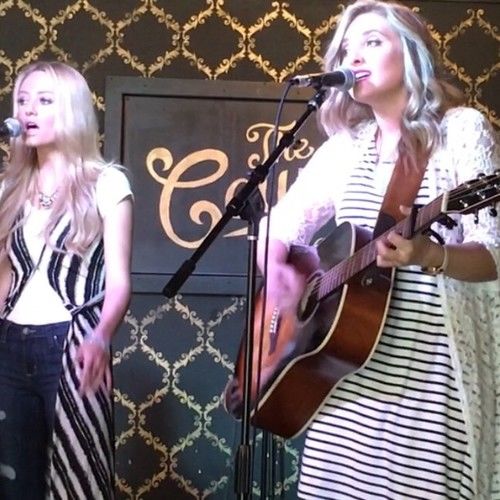 It takes just a few notes to know that Mersi Stone’s cover of “Speakers” isn’t your typical summertime country single. No drums, no bass, just a spare acoustic guitar and distant, keening steel. Listening to their interpretation of the Sam Hunt song or to Who I Am, the album they released in 2015, you’d think they’ve dedicated themselves to singing as a duo from the start. And a few seconds later, as sisters Kori Jean and Kels begin their hypnotic, almost whispered vocals, it becomes clear that these young ladies share extraordinary musical gifts.
Growing up in a small Utah town, Kels and Kori Jean were at first just two of several gifted members of a musically talented family. When they weren’t skiing or playing in the nearby mountains, they performed with Kels’ twin brother and their younger sister, with their dad running the sound board, at church shows and performances throughout the region. “Our Mom and little sister would go out in the audience and sell merchandise,” Kels remembers, smiling. “She was maybe 6 or 7 years old.”
After the family relocated to Seattle and then to Austin, Texas, each sister decided to go her own way for a while, but something kept pulling them back together. When Kori Jean assembled a band to work briefly as a solo artist, she recruited Kels to play keyboards. Both went to college but felt the urge to commit to making music full-time.
Kori was the first to make the big leap and move to Nashville. She initially visited at age 18, when a songwriter friend took her to an album release party for Chris Young, a backstage visit to the Grand Ole Opry and to various music biz offices up and down Music Row. She returned to Austin to resume appearances with the family band but soon decided that her future was in Music City.
“So I decided it was time to go,” she says. “I knew that I never wanted to look back and say ‘Why didn’t we do this or that?’ Which meant I had nothing to lose.”
Self-described as the more business-oriented of the two sisters, Kori Jean moved forward with determination. “I’d have days filled with meetings,” she says. “I’d go into the first at 9 AM and somebody would say, ‘Oh, my gosh, I love this song! You need to do this and this and this.’ At 11 AM I’d go to the next one and they’d be like, ‘Ugh, I hate that song!’ Then at my 1 PM meeting they’d say ‘There’s nothing special about you. You should probably go back home.’ Finally at the fourth meeting of the day, everyone is like, ‘We love everything you do!’ “Each one of those meetings only motivated me even more,” she continues. “I credit them and all the crazy networking I did with finding who I really am and what I have to offer.”
She also found that getting Kels involved was essential, musically and emotionally. “She was already coming out to perform with me during breaks from college. More and more, we felt the chemistry grow between us until we knew this was something we had to do together.”
Shortly afterwards, Kels suspended her nursing studies and joined her sister in Nashville. They rented a place and eventually created their own consultancy, which they used both to meet their expenses and expand their profile in the local community. They gave lessons and classes on creative writing, performance and understanding the music industry. Both did modeling and Kels taught piano.
And they wrote and performed everywhere they could, defining and refining the concept of Mersi Stone at the fabled Bluebird Cafe, on several stages at CMA Music Festival, before 10,000 attendees as the Music City Balloon Festival, opening for Little Texas at Austin’s Red Poppy Festival, through their own innovative “Pickin’ in the Kitchen” YouTube series (“We sit on the kitchen counters with our guitars and do our two favorite things: eat and play music,” Kori says, with a laugh) and perhaps most important, at a showcase before music biz bigwigs in Los Angeles. Show by show, song by song, before and after the release of Who I Am in 2015, word spread about the most exciting young siblings in modern country music.
“In just three months, from January to March, we’ve grown our Facebook fan base from 14,000 to 20,000,” says Kori, almost disbelievingly. “But we don’t even like to call them fans. They’re extended family. They’ve let us into their lives, so we want to let them into ours because we’re just normal people, like everyone else. We fight sometimes. We laugh together. We cry together.”
“In a lot of ways, we’re different,” says older sibling Kori Jean. “Kels has a very natural talent. Even when she was just 10 years old, she could hear a song on the radio and play it back on the piano. My approach is to learn things by working on them and practicing. We both sing and play piano, but she expresses herself more as a player while singing really great harmonies and I feel more at home as a vocalist. I loved studying music theory but Kels was like, ‘I don’t need to do this! I can hear it and just play it already!’ It’s funny how we complement each other, even though we’re passionate about the same things.”
All true, but in life as in music, Mersi Stone are different too. “Everything we’ve done so far has taught me that success is never about luck,” Kori sums up. “It’s about where luck and hard work meet — and when you work as hard as we have, it’s not really luck at all.” 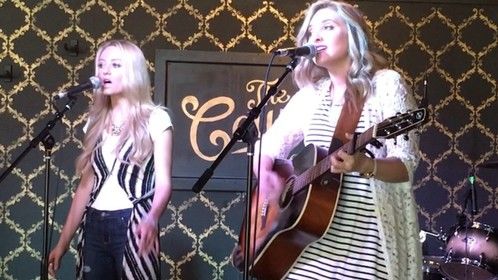