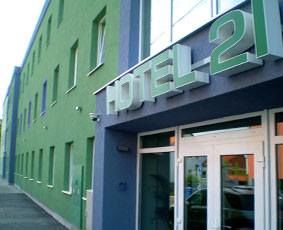 A college student wins a debt-ridden hotel in a card game from the Mob, but they still want control of the hotel and her dead.

Aida Branson, a 23 year old, straight A student at Stockton University, takes a part-time job as a maid at HOTEL 21 after her crush, Kevin Conner, a bellboy, is suspended from their school. But he is just floating thru life, with no particular ambition and has no idea that she is interested in him. He has his eyes on a cocktail waitress at a neighboring casino.

Aida is chosen to work a room where, unbeknownst to her, Mr. Olsen, the hotel's owner is trying to unload this debt-ridden hotel on a couple of mobsters who own him. She has been requested by the mob to be nothing more than a witness to this handover.

During a card game of 21 Blackjack, which Aida can plainly see that the mobsters are cheating. Her boss loses, pulls out the deed to the hotel and signs it over to the men. Aida spots a fresh, unopened deck of cards on the dresser and asks the men to give her a shot at the game. Much to her bosses surprise, the men are reluctant, but allow her to play just one hand. When they attempt to deal from the deck they used to cheat Mr. Olsen, Aida asks to use the fresh deck. Surprisingly, she wins the hand.

Instead of congratulating her, Mr. Olsen grabs his coat and Aida by the arm and dashes out of the room. Luckily, maybe, Aida also grabs the deed to Hotel 21 on her way out. On their way to the hotel parking lot, Mr. Olsen explains that he was trying to dump the place on these men and now they will probably come after both of them. Aida is not willing to give up so easily, but she has no idea how deep the murky waters are.

After her boss drops her off, Mr. Olsen rushes to his house to get some things before leaving the country. Unfortunately, the mobsters are there when he arrives and they want that deed. When Mr. Olsen can't produce it and can't call Aida to drop it off, they decide to get rid of him and collect on a life insurance policy they have on Mr. Olsen.

With Mr. Olsen gone, Aida is now the owner of the hotel. But the police have a murder to solve and Aida is their only person of interest. Kevin steps in and tells the police that he was the last person seen with Mr. Olsen and that he is now the new owner of HOTEL 21. This takes the heat off Aida for awhile. Along with the rest of the hotel staff, Aida begins to use her marketing skills and talents to revitalize the place and bring in more business. This is good for Aida. The bad news? This only makes the hotel more appealing to the mobsters.

More bad news? Kevin is now more valuable to the mob dead or alive. So they take out an insurance policy on his life and want to force him to pay the premiums on this policy or else.